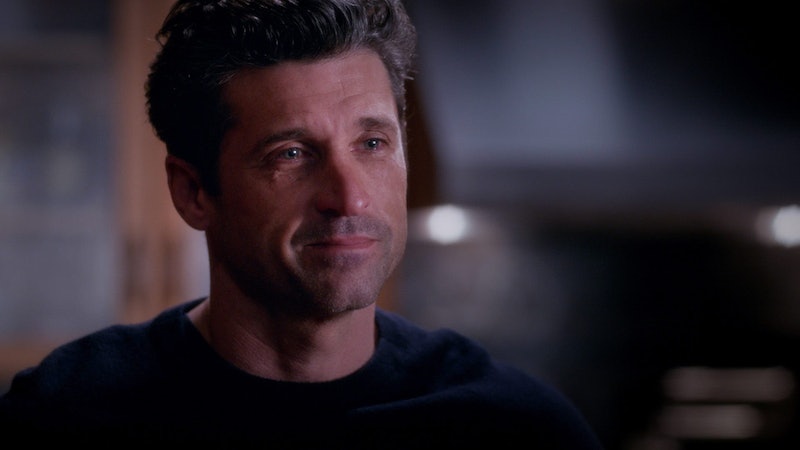 Just when I thought maybe all was finally going to be well in MerDer land, Grey's Anatomy pulled the rug out from under me. On Thursday's episode, Derek flew back to Washington D.C. to quit his job, only he never actually showed up for his meeting. (He should have just quit over the phone.) Ordinarily I wouldn't be so worried, but his sister Amelia made this big speech about Meredith not knowing what it's like to lose a loved one. So, now fans are worried that Derek Shepherd might be dead.

It would be so cruel for the show to put Meredith and fans through that right when things were getting good. I mean, Derek's only been back for like two episodes. His return made the show so much better; we can't lose him now. But you know how Shonda Rhimes loves a good foreshadowing event, and Amelia's words were right up that alley.

"You've never lost the love of your life," Amelia told Meredith during a heated argument. "You've never cried over the body of the person you love most in the world."

Yikes. Amelia's going to feel pretty rotten if something did happen to Derek. But also, she's wrong. Meredith very nearly almost lost Derek in that hospital shooting back in Season 6. She cried so hard over his body that she miscarried. I thought that was as bad as things could get, but apparently now I have to worry about Derek dying all over again.

I'm holding out hope that, like with the cheating storyline, that there's more to this than the obvious. Grey's Anatomy wouldn't really kill Derek, would they? Besides, Patrick Dempsey is under contract for another season, so it doesn't make sense for his character to die. Plus, the actor tweeted on Thursday that they were shooting in Seattle. Unless it's a flashback scene, he's probably not dead.

Here's a short list of things that maybe happened to him instead.

I'm crossing all my fingers hoping that Amelia's words won't come true for Meredith, because that's just too low a blow. I don't think she, or the show's fans, could survive that kind of loss.