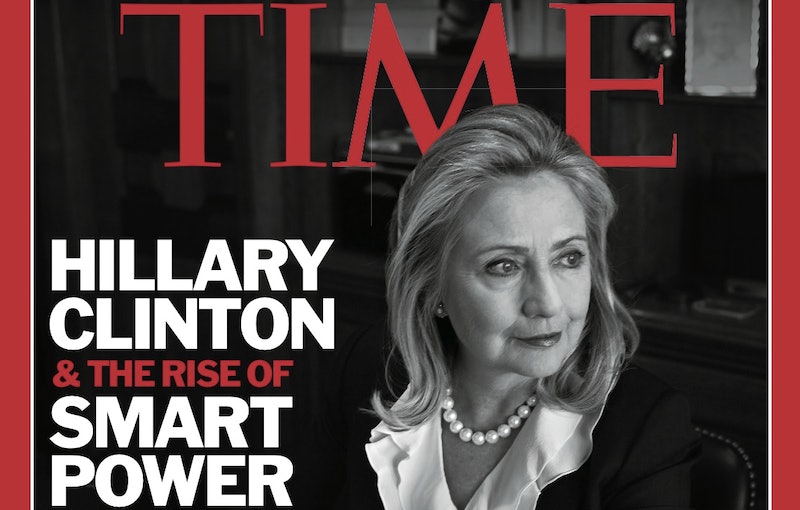 Well, it's official. Former Secretary of State Hillary Clinton is running for president in 2016. After taking an interest in government and politics in college, Clinton made a name for herself in the U.S. government. Her impressive political career spans over two decades. She's served as First Lady of the United States during husband Bill Clinton's presidency, as a New York senator, and as the Secretary of State under Obama from 2009 to 2013. Now, she's taking things to the next level as she once again attempts to become the first female President of the United States.

Like all politicians, Clinton looks extremely well put together at all times. It just comes with the territory when you're in the spotlight all the time. Based on her, shall we say, politically correct style, I would never guess that Clinton has off-days or a bad night's rest. She always looks professional, determined, and powerful, I'm sure with the help of an amazing style and makeup team (I mean, she shares a makeup artist with the show Veep). In case you need a refresher on Clinton through the ages, here are 19 magazine covers starring the political powerhouse. Take a walk down memory lane and relieve Clinton's career, from 1992 to 2015.

This cover came out the same year Bill Clinton was elected president.

Hands in the pocket + assertive gaze = Clinton power stance. Mirabella Magazine has since folded, but you can still score this cover online on Amazon and Ebay.

Clinton scored a Vogue Magazine cover in 1998, while she was still First Lady. In 2013, The Huffington Post reported Oscar de la Renta convinced Editor-in-Chief Anna Wintour to give her the cover.

Clinton appeared on the cover of The Advocate, a gay news, LGBT rights, politics, and entertainment magazine. In her interview with Sean Kennedy, she discussed the gay rights movement and the "soul-searching it’s causing many Americans — including herself."

What better way to celebrate a 50th birthday then with a Time magazine? Clinton was quoted in the magazine stating, "There is no formula that I'm aware of for being a successful or fulfilled woman today. Perhaps it would be easier... if we could be handed a pattern and cut it out, just as our mothers and grandmothers and foremothers were. But that is not the way it is today, and I'm glad it is not."

Clinton appeared on the cover of Newsweek's special edition "150 Women Who Shake the World."

I love Clinton's look in this cover. Her hair is out of her eyes and she definitely knows how to style a pantsuit with a ruffle top and elegant pearls.

Two years after being on the cover of Newsweek's "150 Women Who Shake the World" edition, the magazine named Clinton "the most powerful woman in American history." That's definitely a title to add to her resume.

I'm waiting for confirmation that this is Clinton's real foot.

For her The New Republic cover in 2014, three different journalists discussed "how Hillary Clinton won over the left," why more women should run against her in the primary, and the "Democrats who might actually take Hillary on."

It's nice to see a political figure laughing like she's truly happy on a magazine cover.

The Washington Post reported this was People Magazine's worst selling issue in 2014.

I couldn't tell you what this cover is saying, but Clinton sure looks focused and determined.

This cover was controversial because many people thought the "M" from the publication's title looked like horns on Clinton's head. TIME admitted that this is an ongoing problem and even poked fun at itself with this jovial slideshow of other TIME covers that gave people horns.

More like this
42 Black Owned Fashion & Beauty Brands To Support Today & Always
By Mekita Rivas, Shea Simmons, Kui Mwai and Dominique Norman
Nails With Your Partner's Initials Are The Cutest Valentine's Day Mani
By Olivia Rose Rushing
Chrome Nails Were The Biggest Manicure Trend At The 2023 Grammys
By Olivia Rose Rushing
Amanda Gorman’s Makeup Artist Breaks Down The Poet's 2023 Grammys Glam
By Olivia Rose Rushing
Get Even More From Bustle — Sign Up For The Newsletter
From hair trends to relationship advice, our daily newsletter has everything you need to sound like a person who’s on TikTok, even if you aren’t.