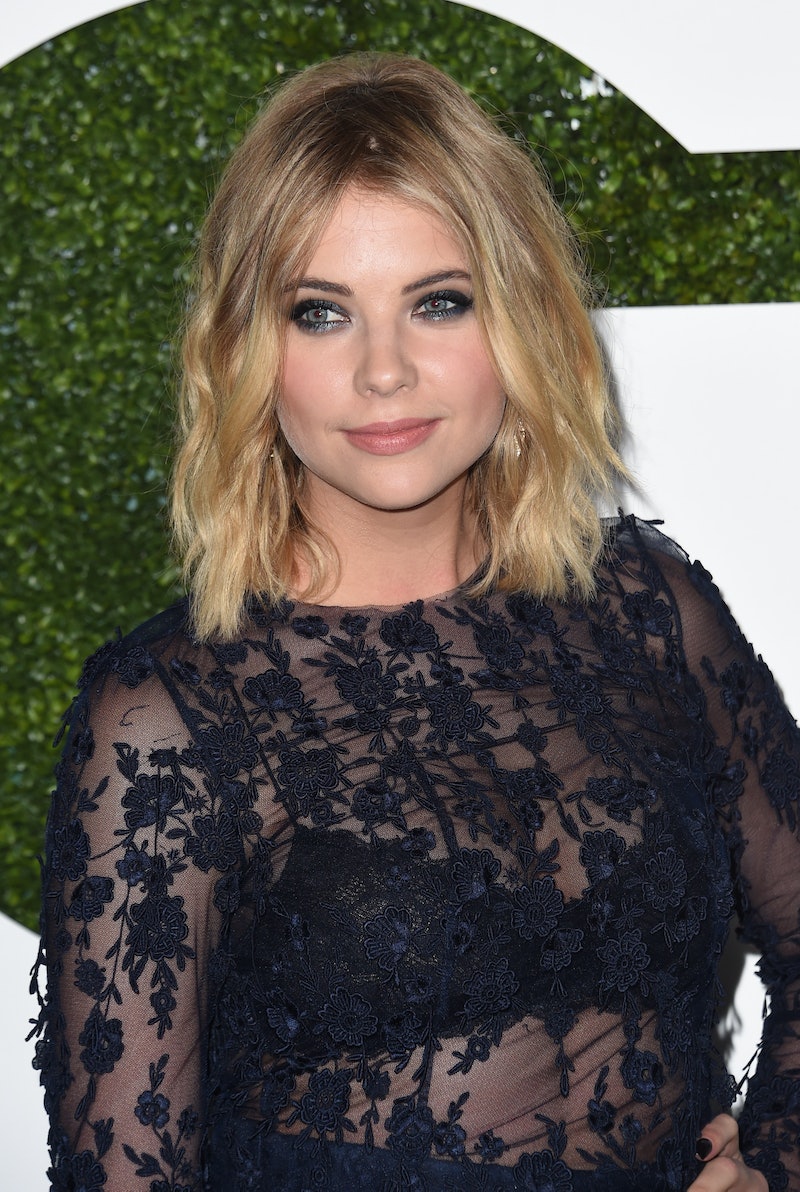 Whoa. Whoa. Whoa. Yes, those three whoa's are totally needed, because this might be some huge news. On Thursday, Pretty Little Liars stars Ashley Benson shared some pregnancy photos on social media. My fellow PLL fanatics are probably freaking out with me, right? Along with her co-star and onscreen love Tyler Blackburn, Benson and Blackburn showcased quite the baby bumps. What does this mean? Is Benson pregnant in real life? Is Hanna pregnant with Caleb on PLL ? Is Caleb pregnant and pulling an Arnold Schwarzenegger in Junior? Are Benson and Blackburn just trying to be funny and make fans freak out even more than when Charles was revealed to be Big "A" in the Season 5 finale? Seriously, what is happening?

Before Haleb shippers start having panic attacks, Benson clearly isn't really pregnant, and a source who spoke with E! News says that Hanna isn't pregnant either. That's right, apparently, Benson thought it'd be hilarious to post herself sporting a fake baby bump, aka a "food baby" per Benson and Blackburn's Snapchats. For those who don't know, Benson and Blackburn are pretty much best friends in real life, so it only makes sense that they'd not only sport their bloated stomachs after eating (see? stars are really like us), but have some fun with it. They love to goof around, and I love them even more for it. It's pretty funny, right?

As you can see below, Benson poses with both Blackburn and PLL director Norman Buckley as she sports her "baby bump" and labels each photo by trimester. Wow. Who knew a baby could grow so fast? In a matter of minutes, Benson went from first trimester to third trimester. Plus, Blackburn was nice enough to take on the second trimester for her.

Even though some fans might not appreciate Benson and Blackburn messing with them (Haleb and PLL worshippers are pretty hardcore), how can you be mad at them? Not only are these pictures hilarious, but we also get to see a fun moment between Haleb IRL.

With that said, there's always still a chance that Hanna could get pregnant on the show. In January, Blackburn teased "Two Truths and a Lie" about PLL with Yahoo! TV. You know what one of those was? It was that "Hanna has a pregnancy scare." Say what? Well, if you compare it to the others Blackburn revealed — "Ezra starts dating another high schooler" and "Caleb almost gets burned alive" — it actually seems to be more of a truth. First, in Season 5's episode titled "Fresh Meat," Caleb and Spencer wanted to destroy the knife that they thought could be the murder weapon in Mona's death. Spencer and Caleb then tried to burn it in the school's kiln, which is where Caleb almost got burned alive. So, there's one truth.

As for that other possible truth or lie that Ezra might date another high schooler? Yeah, I'm going to go with that so not happening. Even though Ezria is dunzo at the moment, I just find it hard to believe that PLL would go down that road again with Ezra. Plus, I don't think it'd be in the show's best interest to add another creepy element to Ezra. Come on, you know it's weird that he dated a high school student. Seriously, why do all these older guys like girls in high school?

Moving on. So, that definitely means Hanna will have a pregnancy scare, right? It only seems logical. Now, I'm not saying these photos of Benson and Blackburn mean Hanna will be pregnant in Season 6, but there's still a chance. Also, there's going to be a PLL time jump, which means Hanna could get pregnant after college.

Whatever the case, just because one source says Hanna isn't pregnant right now doesn't mean she isn't or won't be in the future. Let's face it: everyone who works on PLL likes to mess with fans and keep them guessing, which might also be the case when it comes to Hanna possibly being with child.