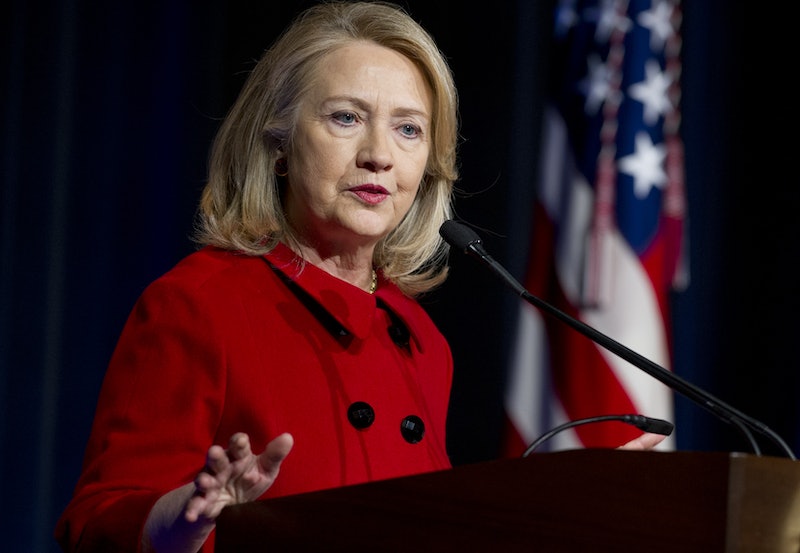 They say you should dress for the job you want, not the job you have, and Hillary Clinton has been taking that old adage to the next level. Not only has she had amazing, high-powered jobs — Senator? Secretary of State, anyone? — but she's going for the number-one spot, and to get that spot she needs to act like she already owns it. That means going beyond dress and getting on her presidential grind with her words and actions, too, and Clinton has already shown she is up for the challenge.

She's known for her diplomacy, but in reality, pretty much everything Hillary Clinton does makes it clear that she's a great candidate for president. Not only is she fair and diplomatic, but she stands up for the rights of oppressed groups, and she's very personable and even funny when the occasion calls for a sense of humor or just the ability to laugh so you don't cry. And she's not completely stoic, even though she can be quite serious — her ability to show human emotion is part of what makes her such a stellar presidential hopeful. It was a hard job, but we've rounded them up, and these are the top seven times Hillary Clinton acted totally presidential.

The 2012 Women In The World Summit

Nailed it. Clinton is an excellent candidate to stand up for women and girls' rights around the world, and she'll start at home.

Speaking Out At The Benghazi Hearings

With a few exceptions, presidents are well-spoken, clear, and concise. They are strong speakers who can stand up for what they believe in and convince others to follow in their path. Clinton demonstrates such great passion and speaking skills here — and improvised, without a speech writer — that it's almost like she was already president.

Her powerful speech hits the nail on the head in yet another great example of public speaking that makes talking to thousands of people look like a piece of cake. For the famous sound bite, skip to 14:45.

How classy is it that she refused to say anything negative about President Obama? She held her ground that there was never any animosity between them, even in the 2008 race.

When Clinton was called out for using a personal email address, which caused a lot of controversy on both sides of the argument, she took the high road and asked the State Department to publicize all of her work-related emails — publicize, meaning for the entire public to see. That's a bold move, and it's one that even President Obama himself said he was "glad" to see. She's acting like a president and she has a president's approval — two for one.

In one of the most incredibly funny politician interviews on The Colbert Report probably in the show's entire history, Clinton drops a truth bomb about how she negotiates hard choices. Skip to 5:57 for her bone-chillingly profound answer.

In 2012, Clinton became the first U.S. Secretary of State in 50 years to travel to Myanmar on an official visit. She met with the country's leading democracy activist, Aung San Suu Kyi. Although the U.S. still officially calls the country Burma, showing opposition to its political policies, Clinton's visit was historic in opening up lines of communication.

More like this
Christina Aguilera Took A Powerful Stand At Brighton Pride
By Sam Ramsden
Are John Legend & Kanye West Still Friends? The Singer’s Latest Update Is Candid
By Brad Witter
'Scream’s Courteney Cox Has Broken A Major Horror Record
By Sophie McEvoy
What Is Ben Affleck's Net Worth? At 50, The Oscar Winner Makes 8 Figures Per Film
By Meg Walters
Get Even More From Bustle — Sign Up For The Newsletter