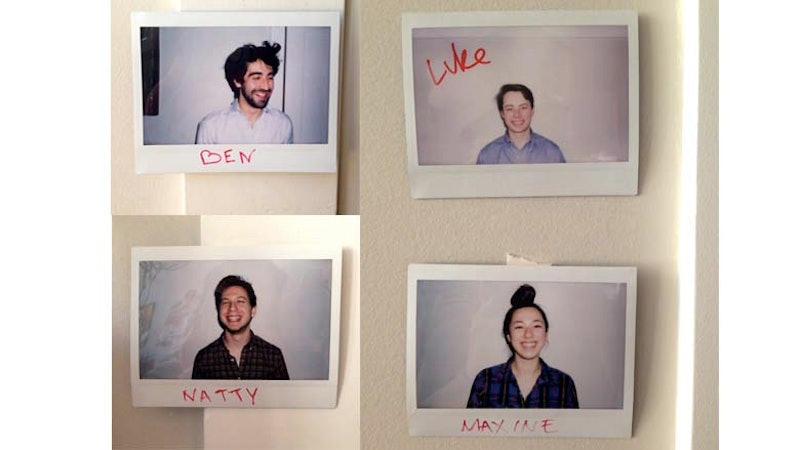 For the last two years of college, I shared an apartment with two other girls. In our bathroom was a never-ending rotation of makeup and perfumes and lotions and who knows what else, and I secretly loved guessing their crazy beauty routines based on the products we had lying around. Each of us had a set routine to follow, based on our own personal experiences, and would regularly share tips about what products worked well, which beauty hacks were epic fails, and anything else we figured out along the way. After two years of sharing a bathroom, I got to know what products belonged to who and how often they were used.

I now share a three-bedroom apartment with three dudes. My boyfriend Luke and I share one bedroom, and Nat and Ben each have their own room, and we all use the same bathroom. For the most part, it works really well, although my roommates drive me crazy sometimes, especially when it comes to keeping track of chores. But I probably drive them insane when it comes to sharing the bathroom. I can confidently say I'm the only one who's scrubbed the tub or the toilet, but I am pretty messy when it comes to organizing and storing all of my stuff. And the guys are a little intimidated by the amount of stuff that I have. There's a whole cabinet filled with makeup and hair products and nail polishes and lotions and oils and combs. Nat described it as a full-on apothecary the other day, and that's not a terrible description.

One of the perks of living with people who don't care about their skincare regimen is that I don't have to worry about them using my nice face wash or stealing my makeup. But I've also been wondering if these guys even know how I use all of this stuff that's lying around the bathroom. I spend so much of my time thinking, and writing, about my beauty routine and what works and what doesn't, but they don't seem to care about any of it.

I decided to put them to the test, to see if the three guys in my apartment could figure out what all the products lying around our bathroom are used for, and to try to demystify my own routine for them in the process. I laid out the eight skincare products I use on a regular, if not daily, basis, and asked the dudes to recreate my morning and evening routine. I told each of them that I used all of these products at least once a day, and some of the products were used for both my morning and night routines. I refused to answer any questions about the products themselves until they had decided what my routine was. I also asked each of them to describe their own routine for me. Here's what they thought about my skincare regimen.

Nat has the most regular skincare routine of the three, washing his face with Cetaphil twice a day, once in the morning and once before bed. But he doesn't do much else. He was perhaps the most curious about all the different products, even testing one of the products on his hand.

In the morning, Nat thinks I wash my face with Aveeno Clear Complexion Foaming Cleanser and then use the Burt's Bees Garden Tomato Toner to further cleanse my face, although he wasn't entirely sure how I applied it. He guessed I then put on Neutrogena Ultra Sheer Dry Touch Sunblock, because it is sunny during the day, and then used Tatcha Moisture Rich Face Cream. I top the whole thing off with Tatcha Camellia Nourishing Lip Balm, and walk out the door. The biggest flaw I see in this morning routine is how much lotion I'd be loading onto my face. Even though both the sunscreen and the moisturizer are relatively light, I feel like the combination of the two would be way too greasy.

At night, Nat thinks I put Kiehl's Creme de Corps Body Butter all over my body. (He really got a kick out of the name "body butter.") I then use Clinique Take The Day Off Cleansing Oil to get my makeup off, followed by Neutrogena's Oil-Free Eye Makeup Remover to get the cleansing oil off.

Ben is our French roommate who we found through Craig's List, and he is a gem. His routine is showering and sometimes shaving and brushing his teeth. So, basically, as classically louche as you think a Frenchman's skincare routine would be.

Ben thought I used the Kiehl's Creme de Corps after showering in the morning. (He had a distinct advantage in reading the label on that one because he's French.) He then guessed I washed my face, put on the moisturizer to "hydrate" and then the sunscreen to protect, followed by makeup, and topped off with lip balm. (He had a girlfriend who used a heavy lip balm at night, which he hated because it was greasy.)

The Clinique cleansing oil was also a bit of a giveaway for Ben because of the whole French thing, but he had a similar line of thinking to Nat. He guessed I take my makeup off with both the cleansing oil and the makeup remover, and then used the toner to "remove the removers."

Luke is my boyfriend, and we've lived together for about nine months at this point. We've also traveled together, so I was curious to see if he paid any attention to what I take in my toiletry bag. Luke is generally skeptical of my penchant for different beauty experiments. I got quite a bit of flak from him when I tried Kim Kardashian's beauty routine for a week. But when he told me his routine, it was no wonder he doesn't get why I need all these different products. I knew Luke didn't have any face wash, and he told me that he will just splash water on his face to clean it, and likes shaving because it can help "de-oilify" your skin.

Luke guessed I start with lip balm after waking up (which doesn't really make sense). I wash my face, apply the toner (although he also couldn't figure out what it did), and then sunscreen.

At night, Luke guessed I take off my makeup with the remover, and follow that up with the cleansing oil. Then I wash my face, apply toner again, and then moisturize. He thought I put on the body butter before bed.

My morning routine is simple. I wash my face, pat it dry, apply some sunscreen, and head out the door.

The evening routine is much more complicated. Ben was right that I use the Kiehl's body butter after showering, not just anytime, like the other two thought, but I usually only shower at night. I've been keeping up with double cleansing because it's really done wonders for my skin. Sometimes, if I'm wearing really heavy eye makeup, I'll follow up washing my face with the Neutrogena makeup remover to get some of the last residue off. After washing my face and removing all the makeup, I use the Burt's Bees toner, followed by the Tatcha face cream. Before going to sleep, and after brushing my teeth, I'll put on the lip balm. And that's it.

I'm happy to report my own boyfriend's guess was closest to my real skincare routine. Ben and Nat were a distant second and third, respectively. I loved hearing their perspectives and realized how little they know about skincare, mainly because it's not something they talk about. Nat even admitted, "I've never thought twice to research it." They were fascinated by how much I knew, by how I figured out what worked and what didn't, and how much time I put into my skincare every day. All of them, somewhat incredulously, asked me if I really used all eight products daily.

These conversations with my male roommates made me painfully aware of how much time and effort and money has gone into cultivating my skincare routine, and how personal it really is. I also felt like I've been duped by the media. These guys don't spend any time thinking about their skin, so why should I? Just because I'm a girl? It seems unfair that I'm expected to have this perfectly personalized skincare regimen, to keep my skin wrinkle-free and acne-free and taut and soft, while these guys aren't pressured to think about beauty and skincare in the same hyper-critical way I am.

I'm not going to stop using all of these products, because I do like the ritual of it and I do think my skin looks and feels better. But I'm much more aware that it should be a choice to have such an extensive routine, not a requirement. As long as I'm living with these guys, I don't think I'm going to be swapping best makeup tips anytime soon, but it's nice to know that they don't think I'm crazy for using all of these products and that they're comfortable asking me for advice.

More like this
This K-Beauty “Wrinkle Bounce” Stick Is Going Viral On TikTok
By Destiny Knight
This Week's New Makeup Releases & More Beauty Headlines
By Olivia Rose Ferreiro and Erin Stovall
This $18 Cream Blush Gave Me Dewy Cherub Skin
By Jordan Murray
July’s 13 Best Beauty Launches, According To Our Editors
By Bustle Editors
Get Even More From Bustle — Sign Up For The Newsletter