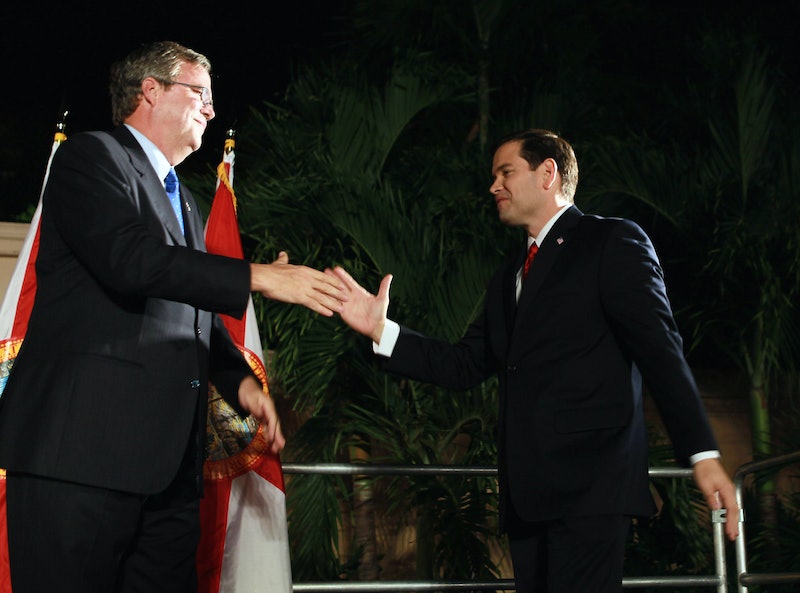 Nothing says friendship like a political attack ad — and if 2016 Republican presidential predictions are correct, the state of Florida might get to see that scenario play out in real time. During a friendly, if not slightly awkward plane ride Friday, Marco Rubio and Jeb Bush were coincidentally seated next to one another for the duration of their two hour flight from the National Rifle Association's annual leadership conference in Nashville, Tennessee. But it wasn't the conversation that made things uncomfortable — on the contrary, the Senator and the former Florida governor have maintained a jovial relationship since Rubio first took the speakership of the state House of Representatives in 2006. What made the encounter awkward for everyone else was the notion that supporters would soon be forced to choose between the two on a national ticket — and likely be subjected to scalding political burns from both sides.

"Jeb and Marco are friends," a source close to both men told Politico on Friday night. "Jeb likes Marco and Marco has a great sense of humor." The source added that the encounter felt like a throwback to the days when Bush lauded Rubio as the reason he had never been "prouder to be a Republican".

Both Rubio and Bush's aides indicated to Politico that the GOP hopefuls had been seated in the same row before swapping seats to sit next to one another. It was a sign of good friendship that may have snuffed out any gossip over whether the two were just playing nice for the cameras. But no matter how much they gravitate toward one another, the fact remains that the two Republican heavyweights aren't going to be able to remain chummy for long.

Already, the tense buildup to presidential aspirations has put Florida residents — and much of the right — in a bind, with many lamenting the torturous decision with "funereal dread", as The New York Times described in a report on Thursday.

"I’m not going to lie, it gives me a lump in my throat," GOP strategist Ana Navarro told The Times. Al Cardenas, former chair of the American Conservative Union called the situation "hard for [Republicans] to emotionally accept."

A report by The Washington Post on Friday detailed the ways in which South Florida residents specifically are dealing with the split in loyalties. With Rubio representing a vast majority of Miami-based Cuban-American residents and Bush raising the ranks of upper-echelon citizens, it would seem that the lines in the sand are easily discernable — but at a fundamental level, many are hesitant to cast their weight behind one over the other.

The Cuban-American Rubio and the bicultural Bush, whose wife Columba hails from a working class Mexican family, share an inextricably linked politcial background in addition to everything else, making it even more difficult for Florida conservatives to decide between the two men, should they both make a run for the White House in 2016. By sitting next to one another on Friday night and making nice to the nth degree, Rubio and Bush have effectively given the collective Florida GOP network just another reason to want to rip their hair out in frustration over what is seen as an increasingly make-or-break decision.

Still, some are trying to find a positive spin on the eternally cumbersome problem in which they've found themselves.