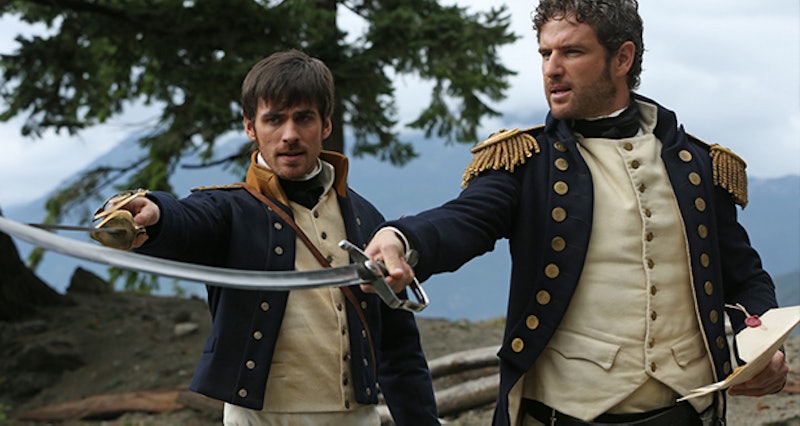 This feels like a safe space to admit that yes, from time to time, late at night, I Google "Killian Jones Captain Hook" just to see what happens. Listen, he is a very dashing pirate, who loves to use the word "luv," and also knows how to wear a long leather coat like no other. Admit it, you've Googled him for fun before, too. Now, if you need more of a Killian fix, you can turn to Once Upon A Time: Out of the Past , the new graphic novel from Disney, ABC, and Marvel. And what's better than one Jones brother? How about two. The Killian centric story in Out of the Past, "Dead in the Water," features the surprise return of his brother, Liam. Last we saw Liam, he was dead. He was poisoned by Dreamshade in Neverland, but then magically came back to life only to die, again, once he got back onto his ship, Jewel of the Realm. Killian — the new captain of the ship, which he immediately renamed the Jolly Roger before becoming a pirate, naturally — then gave his brother a proper burial at sea (aka threw him overboard, which if you ask me is really weird. But hey, I'm not a pirate). For the past few seasons of OUAT, we've assumed that Liam was dead, but it turns out, he's alive. In fact, Liam's just been sailing around the Leviathan Shoals (no relation to the Leviathan bad guys of Marvel's Agent Carter, because that would have been TOO GOOD of a tie-in). If the Levithan Shoals sounds completely strange and foreign to you, don't worry, it only appears in Out of the Past. It's not like you've completely missed a location for four seasons. It's basically a strange and magical Bermuda Triangle near the Enchanted Forest where ships become trapped. In the comic, Liam comes aboard the Jolly Roger, and Killian's crew is 100 percent suspicious of this. They don't think it's possible for Liam to still be alive, but Killian is willing to believe it. The first mate, Lewis, is quick to point out that the Leviathan Shores are known for tricks and mirages, so even though it looks like Liam has risen from the dead, it could be nothing more than a really good spell.

This brotherly reunion is short-lived, though, as no sooner does Liam come aboard before he has to head back out into the sea. There's a sea monster in the waters (think Kraken) and the two brothers have to part ways to save themselves. Last we see Liam, he's drifting off into the sea on a tiny little vessel, and Killian's left raising a toast to his brother, wherever he may be, alive or dead. This short story could be setting up for Liam's return to OUAT. Out of the Past is considered canon within the world of the show, so what happens in the graphic novel is just as real as any episode we see on TV. Hook finally seems to be getting his life together, but the return of his brother — again — might be just what he needs to mess it all up again. How do you think he'd explain something like this to Emma?

More like this
Does 'Locke & Key’s Ending Mean There Could Be A Season 4?
By Sophia Moore
Everything You Need To Know About The 'Big Brother' Reboot
By El Hunt and Maxine Harrison
The 'PLL: Original Sin' Creators Say A’s Identity Will Be “Very Clear” By The Season Finale
By Alyssa Lapid
'The Sandman’s Ending Is A Departure From Neil Gaiman’s Comic Book Series
By Kadin Burnett
Get Even More From Bustle — Sign Up For The Newsletter