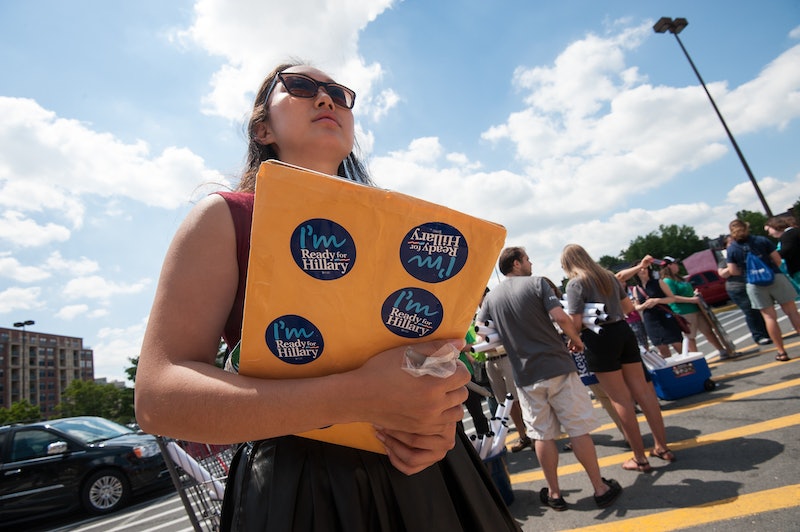 On Sunday, Hillary Rodham Clinton put all that “will she?” or “won’t she?” talk to bed by announcing her plans to run for president of the United States. It will be her second run for the White House, and as long as people like Ted Cruz keep popping up on the other side as her competition, she totally has it in the bag, and people who support Hillary Clinton know it. Clinton launched her campaign basically saying that she’s in it to win it. Finally.

Ever since Clinton lost to President Barack Obama in 2008 it has long been speculated that she’d run again for the 2016 presidential election, and in the past seven years she’s been fairly vocal about not wanting to go for round two. In 2009, she said she wouldn’t be running for president, and again in 2011, she said the same. But, hey, a woman is allowed to change her mind... and this woman did.

President Obama expressed his thoughts on Clinton for president yesterday: “She was an outstanding secretary of state. She is my friend. I think she would be an excellent president. When she makes a decision to announce, I'm confident she will be very clear about her vision for the country moving forward if she announces." Um, hell yeah.

With Clinton throwing her hat into the ring and 2016 not that far off, politics will be a hot topic for the next several months. Because of this, it might even affect who you date. I mean, why would you want to be date someone who thinks Ted Cruz or Rand Paul are all the rage when you’re spending all your free time campaigning for Clinton? That's not going to work.

So, to be honest, you should just probably start weeding through your potential dates now and focus on dating somone who supports Hillary Clinton. Here’s why.

1. Because They Know Women Are Just As Capable As A Man

If old white Republican men had it their way, there would never be a woman president because women are too “sensitive,” and of course that damn PMS gets in the way. Groan.

Dating someone who believes women and men are equal, means you scored yourself a feminist, so yeah... you want that.

2. Because They're Friends Of The LGBT Community

So, yes, at one point, Clinton was against same-sex marriage, but she herself as pointed out that she has "evolved" and is now a full supporter of marriage equality.

In addition to that, during her tenure as Secretary of State, Clinton worked to protect transgender people both here and in the other countries, and she fought to make sure they were allowed to update their passports so as to include the gender with which they identified.

You definitely want to date someone who believes in protecting the trans community and someone who knows love is love.

3. Because They Want Women To Be Empowered

You want to be with someone who not only values women as equals, but wants to empower them, too, and you will not find any other candidate out there who believes in empowering women as much as Clinton does.

From as early as her high school years, Clinton as been working to ensure that girls and women are aware of their potential and the goals they can attain. She continues that today with the Clinton Foundation.

4. Because They Give A Damn About The World Outside The U.S.

As Secretary of State, Clinton traveled the world and has a pretty good idea of how things work in other countries. She hopes to work with Israel to find a two-state solution, her Clinton Foundation is a global initiative that brings education to women and girls all over the world, and the chances of her partaking in some backdoor, seedy dealing with Iran, as the GOP did not to long ago, isn’t very likely.

With so many Americans being so America-centric, you want to be a with a person who cares about the world outside the borders of the U.S.

5. Because They Believe The Middle Class Needs A Break

According to her aids, Clinton wants to cut taxes for the middle class and close up those loopholes that let the rich get richer (you know, like every democrat before her.) However, with the U.S. well on its way to becoming a two class country, this is important. If you date someone who doesn't see that, then they're probably in that one-percent and they hang out with Mitt Romney on the weekends. Yikes.

6. Because They Know Women’s Reproductive Rights Are Paramount

My thought has always been is that you just don't go to bed with someone who doesn't believe you should have complete control over your body. Based on that sentiment alone, you want to date someone who's going to vote for Clinton because she's been adamant about a woman's right to choose for years.

7. Because They Support Healthcare For All

Admittedly, Obamacare isn't what it could have been (thanks to the Republicans), so, yes, it needs to fixed up a bit. While Republican candidates will likely vow to get rid of it, Clinton will aim to keep and it make it even better. Supporting a candidate who believes that every human being deserves healthcare is just support a basic human right.

8. Because They Believe In The American Dream

Far too often Americans forget that we all descend from immigrants and that every one who comes here should at least be given a chance. You want to date someone who actually gets that.

Clinton supports Obama's plan to fix this very broken immigration mess and to protect millions of undocumented immigrants from being deported. Giving that gift to so many people is the very definition of the American Dream.

9. Because It's Proof That They're Awesome

Perhaps, Clinton has a scandal or two in her past, but who doesn't? When it comes down to where she stands on politics, especially the social issues that really affect our generation, she's woman we want in the Oval Office.

Do you really need another reason as to why you should date someone who supports the divine Clinton? Not really.

More like this
34 Quotes That'll Inspire You On Juneteenth & Beyond
By Syeda Khaula Saad and Siena Gagliano
How To Fight For Reproductive Rights, Based On How Much Time You Have
By Courtney Young
How To Protect Your Digital Privacy If You Need An Abortion Post-Roe
By Kaitlyn Wylde
Juneteenth Is Now A Federal Holiday — Here's What That Means
By Lani Seelinger and Syeda Khaula Saad
Get Even More From Bustle — Sign Up For The Newsletter