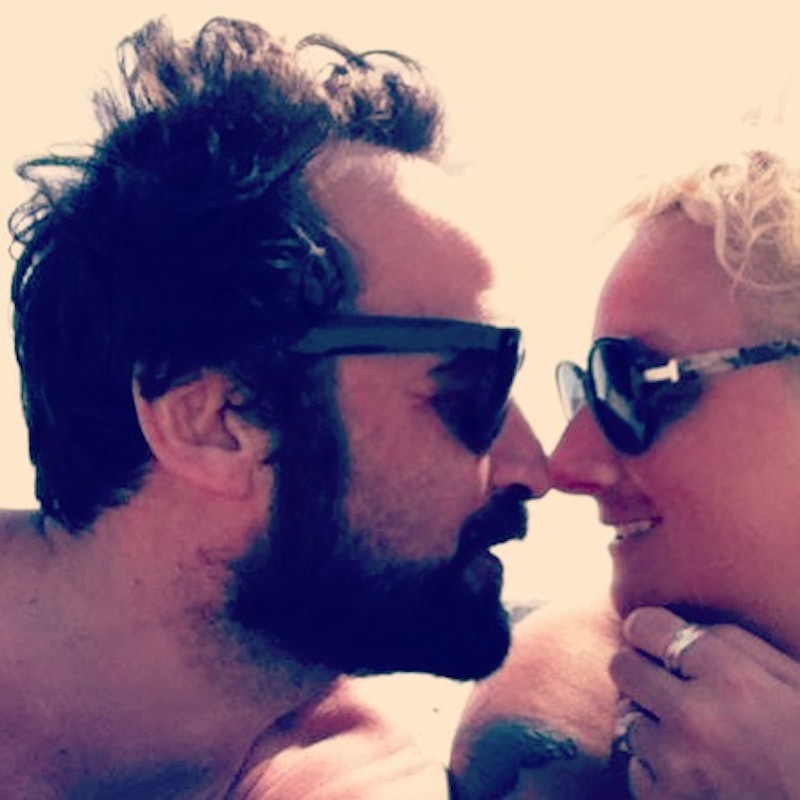 For the first time in my life, I’m dating a feminist man. This isn’t to say that the men of my past were all Neanderthal types who believed I was somehow lesser than them because of my gender. But there is a distinct difference: my fiancé Olivier is the first man in my life to proudly call himself a feminist.

Olivier isn’t just feminist in his thinking; he is a feminist in the way he lives his life, raises his daughter, and approaches all things. I mean, the man actually texted to wish me a happy International Women’s Day saying, “In 2014, the world shouldn’t need a day like this to bring attention to women’s rights, but let’s keep fighting, and hope one day…” Who is this person? Where did he come from? Should I be thanking his mother and four older sisters for the man he is today? Probably.

The first time I heard Olivier call himself a feminist we were having a discussion about the extreme differences between Hillary Clinton and Michelle Bachmann. He not only used the word feminist to describe himself, but also pointed out that with so many women in his life, how could he NOT be a feminist? How could he not want equality for each and every one of them?

And I'd ask you: how could a woman not want to be with a feminist man?

Here are some of the reasons why once you go feminist man, you never go back.

1. HE KNOWS THAT MY BODY BELONGS TO ME ALONE

Although we're partners, he understands that my body, and all decisions regarding it, are mine. While I’ll always respect his input, he realizes that I'm capable enough to make my own decisions. You know, unlike all those politicians who think they should have a say when it comes to my uterus.

2. HE DOESN’T SUBSCRIBE TO GENDER STEREOTYPES IN OUR RELATIONSHIP

I look around at a lot of my friend’s relationships, especially those who are married with kids, and it’s like 1957 all over again. While I’m happy that works for them, I appreciate that our relationship will never fall into those roles and patterns. Besides, I really shouldn't be left alone in the kitchen unless someone wants me to burn down the house.

I’m not exactly the most PC person, but I also know that there’s a time and place for everything. Olivier wouldn't dare to make some sort of archaic sexist joke — and not because he's trying to be PC, but because he knows they're degrading, hurtful, and just inappropriate as hell. Honestly, there’s probably a far better chance of me offending someone with some off-color comment than Olivier.

4. HE’S RAISING HIS DAUGHTER TO BE A FEMINIST

I love that he’s teaching his daughter, who's 16, that men and women are equal, and that there's no debate about it. He's instilled in her the knowledge that she is capable of anything, and that her gender is not something that should ever be considered a roadblock to her success. Because of that, she's wise beyond her years, and her independence and self-esteem is something I've rarely witnessed in a teenager.

For the first time in my life, I can have serious discussions with my partner about women's rights. He feels my pain when we see a giant step backward (I'm looking at you Massachusetts), and shares in my happiness when we get a win.

6. HE’S FEMINIST IN THE SACK, BUT NOT HOW YOU THINK

After the publication of Fifty Shades of Grey , a light was shown on the world of kink. As S&M was further explored by bloggers the world over, what followed, of course, was the question, "Could a woman loved to be tied up, degraded and tossed around in the bedroom, but still be a feminist?" Yes.

So, if Olivier is the one taking that upper hand in bedroom, doing and saying things that would kill my mother if she knew the details, can he still be a feminist, too? Absolutely. We’re both smart enough to know that the roles we play in the bedroom are just that: roles. Mutual respect is always a part of the fun.

7. WE’RE BOTH ON BOARD WITH OUR FEMINIST WEDDING

When it comes to planning our wedding in May, we’re just not adhering to certain traditions. We’ve totally changed the ceremony so that it excludes certain wording like “obey,” and “husband” and “wife.” This isn’t because we’re not proud to be each other’s husband and wife, but because, for us, those words don’t sit equally. Instead, we’ll be pronounced as “partners in love, life…” and a few other things that we’re keeping hush-hush until the wedding day.

Financially, we’re also going even-Stevens on this one. Because that’s what partners do.

8. HE GETS THAT — BREAKING NEWS — MY PHYSICAL APPEARANCE ISN’T PERFECT

I’ve gained a bit of weight since Olivier and I first met, and he’s not only fine with it — he accepts and loves it. He accepts that women’s bodies change, and that pregnancy, should we go that route, will do one hell of a number on my physique. He knows that wrinkles and the aging process are part of the deal, and that I’ll never be a Photoshopped photo of perfection. After a lifetime of feeling self conscious about my so-called flaws, I now realize they’re lovable and, to him, “perfect.”

More like this
How To Fight For Reproductive Rights, Based On How Much Time You Have
By Courtney Young
34 Quotes That'll Inspire You On Juneteenth & Beyond
By Syeda Khaula Saad and Siena Gagliano
The 3 Dating Apps Queer Women & Nonbinary Folks Actually Like
By Emma Carey
How to Delete (or Pause) Your Hinge Account
By Emma Carey
Get Even More From Bustle — Sign Up For The Newsletter