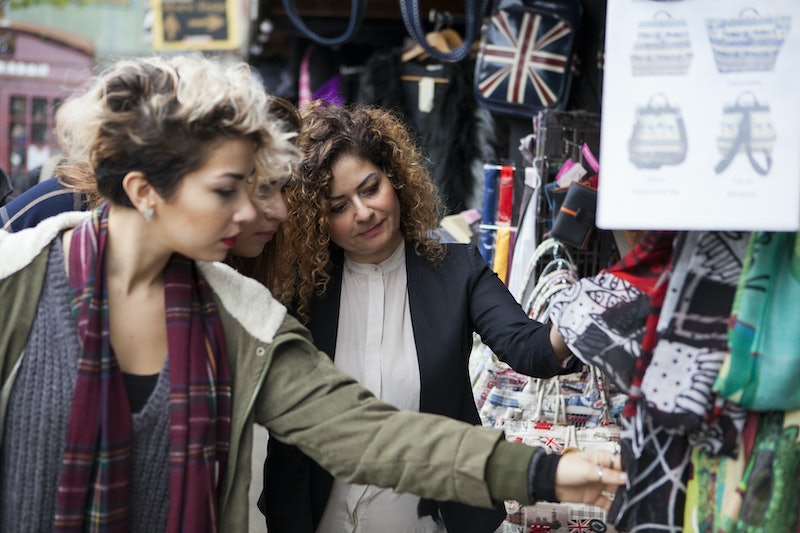 Shopping with Mom. There were the good days and the bad days, which mostly depended on my age and the current mood my mother or I were in. As a kid, though, shopping for clothes was mostly non-existent since Mom pretty much picked out what I wore. Anytime I was in the store with Mom, you could usually find my brother and me hiding in the center of the round clothing racks trying to scare other customers. But as I grew up and she noticed my growing desire to choose clothes for myself, the shopping adventures (and fashion disagreements) began.

There were several phrases my mom habitually said during these retail rummages that baffled, irritated, or embarrassed me at the time — but that as an adult I have come to understand and appreciate. It didn't matter if we were in the mall, a factory outlet, the thrift store, or Target, my mother never failed to ingrain these principles in our shopping experience. In fact, not only do I say these seven things to myself now, but I will also most likely say them to my future daughter(s) while shopping. And I bet you'll recognize a few of these statements from your mother as well.

1. “Are you sure you want to spend your money on that?”

Well yes, Mom, I do want to spend three-fourths of my Christmas money on these jeans, because they are American Eagle, and I will look cool in them, and I would never be able to get them on your dollar.

Since most of the time my parents paid for my clothes, they had final say on what I bought, so those two times a year when I could actually spend my own money, I would always go for the major trendy mall stores. In my teens, they were American Eagle and Gap. Those big purchases would be accompanied by Mom’s disapproving glare at the teller while she expressed what a rip-off their store was to her teenaged daughter.

But it’s her voice in my head I hear now when I look at the price tag on that Michael Kors sweater in Macy’s. Unless I’m really in the financial position to treat myself, that sweater stays on the rack, and I make my $80 go a little further.

If picking out clothes with Mom was bad, trying them on could be torture. What I saw in the mirror was not what my mother saw. I thought I looked like everyone else at school, but Mom knew how my body was developing and what hereditary looks I was getting, which were a fuller figure and an abundance of boob.

I remember the day I had to start buying size Large in tops. I literally cried when Mom suggested I get a bigger size. “But, Mom, why does the word LARGE even sound uglier?” I asked through tears, emphasizing the harsh sounding "rg" in the word. But she helped me realize that no one sees the size on the inside tag, and taking clothes to the fitting room that will actually fit you eliminates unnecessarily bad thoughts about your body.

This one always got me, because isn’t that the point? But it was the polite way of teaching me that just because I’ve got it doesn’t mean I have to flaunt it. Don’t get me wrong, there’s a time and place to show off some. But these days, I especially appreciate the fact that sometimes keeping things covered shows just as much beauty as revealing it all.

My mother was not afraid of other people hearing her opinions. So when she saw a trend in a store like wearing your panties on the outside of your jeans á la Britney Spears circa 2001, she stated the obvious. To disregard something that was supposed to be cool was embarrassing for me at the time, but I can proudly say out loud now that something like bleached eyebrows is just not for me.

5. “I never buy anything full price.”

Even though I had to have some patience, most things in the window of the sales floor were on clearance two months later, and that’s exactly where Mom and I would head when entering a store. Since it’s not Christmas or my birthday money I’m spending anymore but my income that has to pay for everything else, I’ve learned the value of retail markdowns. Trends are always in fashion longer than they tell you, so I’m okay with waiting now and feeling better about the deals I get.

Oh, yeah, of course this tube top that I have to keep pulling up is totally comfortable! I don’t know what it is about fashion that makes us sacrifice our comfort to be on trend, but I would have done anything to be cool when I was younger. Asking if I’d actually ever where what I was trying on was Mom’s way of not wasting space in the closet. As an adult, it’s working.

I used to groan at that statement as a teen. Until I learned that thrifting is one of the most fabulous ways to get a great deal. Once Mom taught me how to scout out the best thrift shops, I could wholeheartedly agree that secondhand isn’t synonymous with junk.

More like this
Most Comfortable Underwear For Big Butts
By Audrey Williams
42 Black Owned Fashion & Beauty Brands To Support Today & Always
By Mekita Rivas, Shea Simmons, Kui Mwai and Dominique Norman
Ear Cuffs Are The No-Piercing-Required Way To Play With Your Style
By Carolyn Steber
Crescent Bags Are All The Rage Right Now
By Allie Fasanella
Get Even More From Bustle — Sign Up For The Newsletter