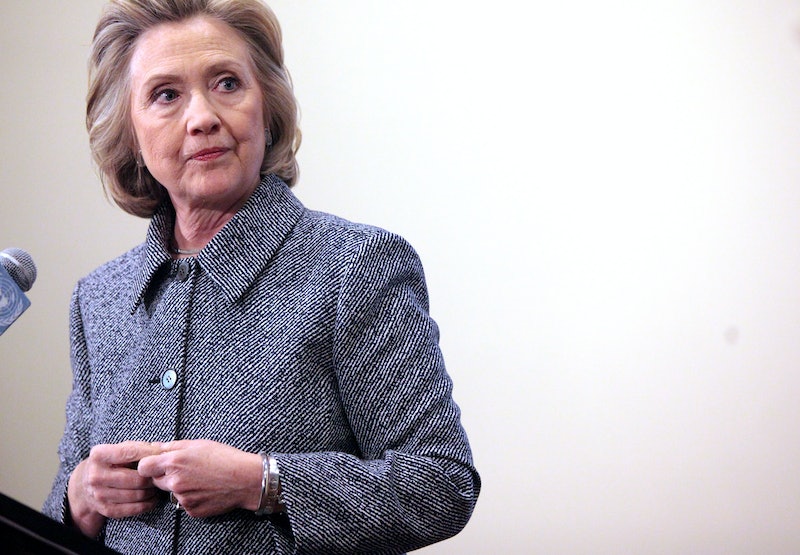 Hillary Clinton announced she's running for president. Finally! With a new website, an announcement tweet and a YouTube video, the much-anticipated presidential campaign is underway. While people across the country are wondering (and rejoicing) over what it could mean to have a female president, you're probably wondering exactly what this means for women's rights, you, and your body. What about your sex life? Where does Clinton stand on birth control and contraception? She says she wants to champion for Americans, but what will she be championing for?

Women's rights were an essential part of Clinton's diplomacy as secretary of State. We already know Clinton is pro-choice (though she does say abortions should be "legal" and "rare"), but what position will she take on contraception?

While all we have is her campaign video at this point, there's good news about how Clinton has approached birth control in the past. Through speeches, reactions to news events, and books, Clinton has defended access to birth control numerous times through her political career, often pointing out that access could reduce the number of abortions — which makes dealing with pro-lifers easier.

From her reaction to the Hobby Lobby case to her disagreement with Mother Teresa, here are some of kickass times Clinton has fought for birth control and women's reproductive rights through the years.

Last year, after the court ruled 5-to-4 that Hobby Lobby, a private organization, was not required to pay for its employees' birth control, mandated in the Affordable Care Act, Clinton said it was a huge setback for women. She explained she found it "deeply disturbing" to see that we're going in the direction of companies imposing their religious beliefs on employees and denying women contraception.

“It’s very troubling that a salesclerk at Hobby Lobby who needs contraception, which is pretty expensive, is not going to get that service through her employer’s health-care plan because her employer doesn’t think she should be using contraception.” - Hillary Clinton

Here's a clip from the a Facebook Live session where Hillary discussed the Hobby Lobby decision.

2. Clinton Has Been A Big Advocate Of Making Plan B Widely Available

The Huffington Post has called Clinton "one of Plan B's greatest advocates", and she's been one for a while.

In January 2005, when Clinton was New York senator she detailed her views on the morning-after pill in a speech to New York State Family Planning Providers:

"I am hopeful that the FDA will come to its senses and announce a new policy making Plan B available," she continued. "Information about Plan B should be available over the counter, which is exactly what the FDA's Advisory Committee recommended. It should also be made available —automatically — to women who are victims of sexual assault and rape." - Hillary Clinton

In April 2005, she blocked the nomination of Lester Crawford, President George W. Bush's choice for FDA head, until they made a decision on whether Plan B would be available over the counter, without a prescription.

"We appreciate Dr. Crawford coming in to meet with us today, but the bottom line is that the FDA has had the Plan B application for years and the American people simply need an answer yes or no. Science should never take a back seat to politics and ideology. - Hillary Clinton

3. As Secretary Of State, She Felt Strongly About Protecting The Rights Of Women — Including The Rights To Reproductive Healthcare

Watch this video of Clinton, as Sectary of State, defending reproductive health and family planning in 2009.

4. She Defends The Right Of Women To All The Healthcare Services They Need.

In a speech for the Pennsylvania Conference for Women 2013, Clinton detailed The Clinton Foundation's No Ceilings: The Full Participation Project, explaining that she's working to "defend the right of women to all the healthcare services that they need and deserve."

5. She's Said A Woman's Reproductive Decision Is Her Own ...

In a speech to the women of Colorado campaigning Democratic candidates last October, Clinton said that women's reproductive rights were 'under assault' across the country and that they aren't the business of corporations or politicians.

"These democrats will never shame and judge a woman for decisions that are complex and deeply personal, decisions that belong between a woman, her family, her faith and her doctor; not with her boss or a politician." - Hillary Clinton

After the Hobby Lobby ruling, Clinton compared that decision to what's happening in foreign countries where women are deprived of rights.

“Among those rights is control over their bodies, control over their own health care, control over the size of their families ... where women and women’s bodies are used as the defining and unifying issue to bring together people — men — to get them to behave in ways that are disadvantageous to women but which prop up them because of their religion, their sect, their tribe, whatever. So to introduce this element into our society… it’s very troubling" - Hillary Clinton

7. She Even Disagreed With Mother Teresa On The Issue

In Clinton's book Living History, she reflected on conversations she had with Mother Teresa. While they agreed adoption was a better choice than abortion, they respectfully did not see eye-to-eye on plenty of other women's rights issues, including the right to choose.

"I also disagreed with her opposition – and that of the Catholic Church – to birth control." - Hillary Clinton