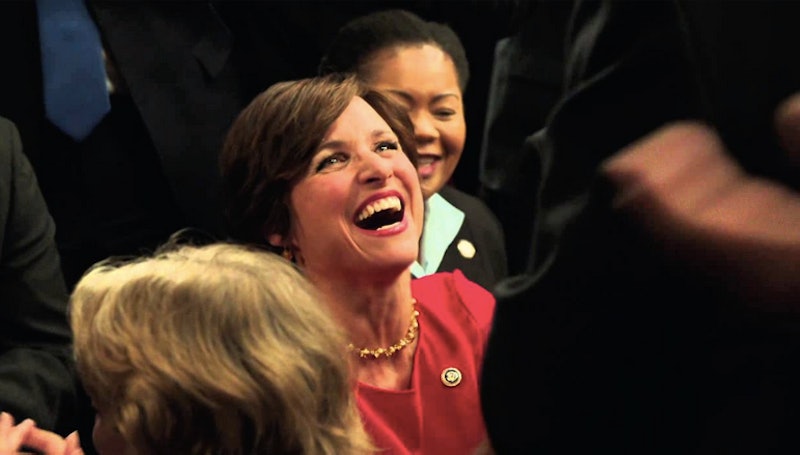 In what might be such good timing I'm not entirely uncertain that HBO and a certain campaign manager weren't in cahoots, Selina Meyer begins Season 4 of Veep as President just as Hillary Clinton announces her official campaign for the 2016 ticket. (Though, here's hoping no one's presidential campaign is as full of hijinks as Selina's.) Things are very different when we start in on Veep Season 4 — something Tony Hale's Gary is not adjusting to very well — and Selina's staff is merging with the existing White House staff while Amy's out in the field trying to win Selina the presidency... that she's currently holding. It's a whole thing. But when big changes befall any series, it comes with a series of often accusatory questions, including but not limited to "Can they keep the magic alive?" In the case of Veep the answer is, "I'm sorry, I'd answer you but I'm still having trouble breathing because holy hell this is funny."

In the Season 4 premiere of Veep, we open on President Selina Meyer giving her first big speech. After greeting everyone with typical Selina charm, the Prez hits the podium, prepares to blow everyone away, only to watch at the teleprompter goes from a page full of text to simply "/:" (points for getting the f—k up to look just like Selina's sideways disappointed grimace). It's so simple, and yet the perfect setup for the former Veep's run as de facto president.

Of course, for those who forgot, Meyer ended up as President while on her presidential campaign trail in a very House-of-Cards-ish twist (the President's not dead, but he sure ain't the President anymore and for the record, Selina Meyer's run is far more interesting than Frank Underwood's latest struggle). That raises the stakes of everything Selina Meyer and her team say or do as they're still trying to get her elected to the seat she wound up holding. And as we've learned time and again, when the stakes are highest, that's when this ensemble makes us practically pee our pants.

This season, adding to the hilarity is a young aide... or intern... (I'd tell you her name, but literally no one in the White House seems to know who she is or why she has all this information about a set of lost hikers) as well as Michaela Watkins as the White House decorator and Amy's assistant from last season Richard, whose incompetency is on fire this season. Selina's daughter also gets a larger role (I'll leave the details to the professionals because it's a pretty damn good little side plot) while Matt Walsh's Mike seems to be going through some bassackwards mid-life crisis. And of course there's Jonah, who's back still stumbling his way into what he thinks is a sliver of power just as perfectly as ever.

Really, the story on Veep could change however the writers deemed necessary, but as long as we've got our core ensemble (with a few folks thrown in for some extra spice), we could be watching Selina try to pick her career up off the ground after losing the election and it'd still be one of the best shows on television.