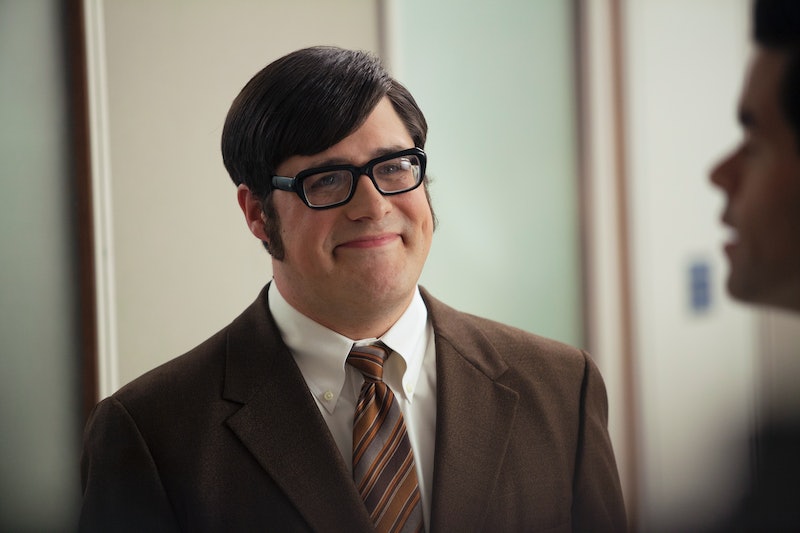 Ew, ew, ew, ew, ew. It's something I haven't done while watching Mad Men since Sally caught Roger receiving fellatio at a fancy dinner party. But man, did this episode bring that reaction back out with fervor. You see, now that Megan is free of Don, she's throwing herself all the way into her career and that means taking meetings... with the head of TV at SC&P. But Harry Crane asks Megan for sex in exchange for his help less than two minutes into their business lunch. And it was really, really creepy. Like, nail in the Harry Crane decency coffin creepy.

While Megan talks about how hard she's trying to break into Hollywood, Harry gives her all this fluff about how her agent doesn't know how to get her into TV pilots (implying that he supposedly does) and then segues into the ways in which Don didn't appreciate her. Dude. She's literally had two sips of the wine that was already there before you sat down. Maybe chill out for a second.

It's mere seconds before Harry grabs Megan's hand and asks her to come up to his room — "there's a phone in there, so I can make some calls." Thankfully, Megan is having none of this. She downs her glass of white white with all the sass of a woman taking a whiskey shot and leaves Harry sitting there, wondering what just happened.

But it actually gets worse.

Harry then goes to Don to try and spin some pre-emptive yarn about how Megan has gone batty and that she said all these crazy things to him at lunch, so who knows what she'll say when she sees him. Are you freaking kidding me, Harry Crane? I get that he's a plot device, but I'd like to think that no human being is this stupid. Don doesn't believe him, but he does feel sorry for what he's left Megan in and drops her a million dollar check later that day.

And while Megan is back to dealing with her real problems and forging a Harry Crane-less existence, let's just stick a fork in Mr. Crane now. Because after that, he just creeps me the hell out.