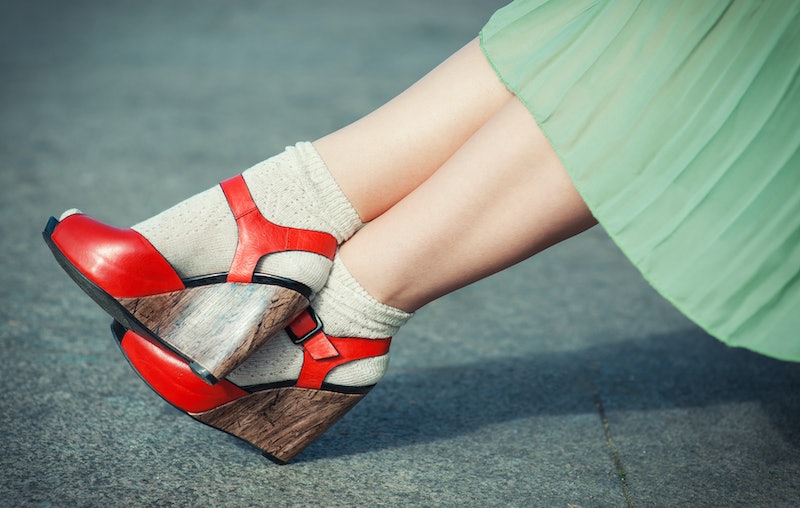 April showers bring May flowers, which means sooner than later you're going to be trading those rain boots for your favorite pair of flip flops. For many of us, that means hitting the nail salon for a humbling pedicure to get rid of cracked heels and chisel away seven layers of old nail polish. The first pedicure after a long winter of toenail decline is an important, humbling ritual that every woman endures as the seasons change and we trade our clunky boots for comfortable sandals.

You know how bears go into hibernation in winter? I'm kind of the same way, and I'm not alone. I may not build a den and go into a deep slumber, but my regularly scheduled beauty routine goes on an unprecedented seasonal hiatus. Cold weather has a way of stealing all your cares, so your winter self is different than your summer self. When you're going to be bundled up in layers with dry skin and hair, feeling cold from the moment you leave your bed until you climb back into it, looking after your toenails takes a backseat to basic winter survival.

I completely let my feet go in winter. From November through February, you can assume my toenails are too long, my heels feel like sandpaper, and all that random skin that usually get plucked away from my big toe is in full force. To put it in foot nursery rhyme terms, if my winter piggies went to the market, they'd be wearing yoga pants with a giant hoodie hoping they don't run into anyone they know. It feels great until you realize that spring snuck up behind you with all its open-toed shoes, and you're the only person left wearing socks.

I don't routinely go to the salon for my manicures and pedicures, but kicking off the warm weather months doesn't feel official unless it involves some foot pampering. I never feel bad about my fatal foot choices until I'm in that massage chair being asked if the water is warm enough. That's when it hits me: This is my first pedicure since last summer, and it's going to be uncomfortable for everyone involved. If you're anything like me, these are the seven stages of post-winter pedicure panic:

Once you’ve picked your polish color and your feet are soaking in the water that you aren’t going to mention is a little hot because you’d rather scald your feet than seem like one of those high maintenance pedicure people, you realize that another innocent human being is going to be very close to your feet. This person came into their job hoping for an easy day, but instead he or she is going to endure your crazy cuticles and the trace amounts of glittery silver nail polish from early December that has since been painted over with several coats of Plucky Plum and Right Said Red. You're too preoccupied with your own foot situation to even freak out about potentially unsanitary tools or any of the the other dangers of getting a pedicure.

What if this was the winter season where everyone else in the entire world decided to keep up with the maintenance of their feet? What if you’re the only one with an alarmingly long and semi-sharp pinky toenail? What if your toenails are what inspire your nail technician to start a Tumblr titled, “Winter Toenails Are Coming” with your feet pictured on the home page? What if you run into someone you know, and they post a picture of your toenails on Instagram?

You’re already in the chair, and there’s nothing you can do about your toenails now. They may not be at their best right now, but no mortal can survive the winter season with their feet unscathed. Your feet — no matter how personally objectionable you think they appear — cannot be the most neglected podiatry specimen to ever come through the salon. It’s impossible! And even if by some chance this is your nail technician’s first day and she’s traumatized by your big toe, you haven’t done anything wrong.

The pedicure process has begun, and even though you’ve been through this before, everything is different. Instead of using two cotton balls to remove your nail polish, the nail technician had to use four and a half. Everyone in the salon had to put on a hard hat when your nail technician began filing your toenails, and your feet have become so callused and dry during the winter months that you aren’t even experiencing the struggles of being ticklish like you normally do. You’re also wondering if you’ll be charged to replace the pumice stone that crumbled against your heels. How much should you tip your nail technician for this kind of heavy duty pluming?

You’re never going to let this happen to your feet again. Next winter, you’re going to buy a foot spa and invest in the finest moisturizer that money can buy. You'll embrace weekly DIY pedicures to keep your toes looking flawless. You’re going to keep an eye on that that pinky toenail that grows faster than anything else on your body, and you’re going to file and buff your feet every time you’re in the shower. You'll never run out of nail polish remover again, and your feet will be perfect year-round.

Okay. You know what? Yes. Sometimes you paint over nail polish instead of removing it. You’ve let your toenails get long enough that you’ve seen more of the white part than you care to admit, and your feet do not always feel and smell like a flower petal. They’re feet, and you use them. You cover them in socks and run around on them, and sometimes they take a beating — especially when they spend months going numb or hoofing it through snow. No one can judge you for letting your feet go au naturale in their slippers when it’s cold out. They deserve a break, too!

They’re your feet, and you know what’s best for them. Whether it’s going months without nail polish or falling behind on toenail clipping, there’s no right or wrong way to look after your feet. No one has cute feet all the time, but more importantly, there is no standard for the perfectly groomed foot. So go proudly for the post-winter pedicure, and remember that you’re the only one with the power to define your beauty obligations.