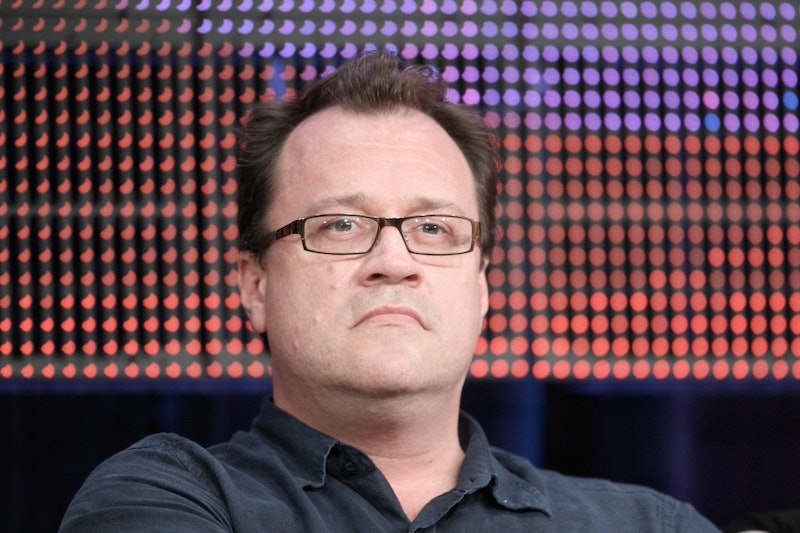 Normally, people are told to keep their minds out of the gutter, but British TV producer and writer Russell T. Davies knows that us humans just can't help thinking natural, sexual thoughts sometimes. Davies' two new series Cucumber and Banana premiere in the U.S. on Logo TV on Monday, April 13 at 10 p.m. and both shows focus on modern-day life for LGBT characters, which Davies first brought to TV back in 1999 with the original U.K. series Queer as Folk. Davies actually had the idea for Cucumber after he finished Queer as Folk. Cucumber follows Henry Best, a gay, middle-aged British man (played by Vincent Franklin) after he splits from his long-time boyfriend Lance Sullivan. The idea for the spinoff series Banana followed as a way to show a more diverse cast of characters that are involved in Henry's life. The two series already aired in the U.K., so Brits were exposed to Davies's nakedly truthful portrayal of gay men in the 2010s with his new series — not only emotionally, but physically with male full-frontal nudity.

Davies told The Telegraph back in January, "There is not enough male frontal nudity on TV...You’re far more likely to see a naked woman than a naked man. It’s only [seen as] rude because the rest of television is rather tame — it doesn’t actually talk about sex and our bodies and how we feel about them." When I ask him about The Telegraph interview he says, "Possibly when you read that quote I was complaining about lack of male frontal nudity in life in general [laughs]. . . I can't get enough of that, let's be honest." Davies was already a man after my own heart since he created Queer as Folk and rebooted Doctor Who, but being unafraid to have naked men on his TV series (something even Game of Thrones shies away from) officially solidified him as one of my favorite showrunners ever.

When I bring up the disparity between male and female nudity on TV, Davies says, "It's such a straight, male-dominated world. I read a fascinating article yesterday that even references to the menstrual cycle were being taken off of Instagram. Taken off Facebook. Treated as dirty and filthy. Because it's just a male world. And it was saying how ridiculous it was, you could not possibly be talking about anything more natural." Davies hopes to tackle the challenging task of making sure TV and the web are not ruled by straight men.

As for the nudity on his own series Cucumber, Davies provides insight to the director of photography and camera operator (who Davies called "a wonderful man, but was straight") on how to film the show with a "gay eye." Davies says, "I'd literally have these great conversations with him saying, 'You've got to get a male, gay eye into this, which is when your camera is on someone don't cut him off just above the waist. You've got to go slightly lower because that's where the gay eye is going'...And that's not dirty. That's completely natural."

"Frankly, you would never cut a woman's chest off in a shot because you've got a lifetime of instinct that wants to include that in the shots and you've got to think outside that box now and have fun with it," he continues. "And rove like our eye naturally roves — I don't mean in a nasty, lascivious way. I just mean in a healthy way.'"

And speaking of male frontal parts, how about the series' titles? I mean, they have to be about the male anatomy...right? Well, Davies explains that he read a report from an institute in Switzerland that did a sex survey where they defined the male erection as four stages (from soft to hard) as tofu, peeled banana, banana, and cucumber. "The moment I read that, which was about 10 years ago, I just went 'Oh my goodness. There's the title. That's the title of this drama that I'm trying to write.' It's literally about that, so hooray for that institute."

Well, I say hooray for Davies for bringing realism (and not just straight male realism) to our televisions. Be sure to see it in action during all eight episodes of Cucumber and its companion series Banana on Logo.