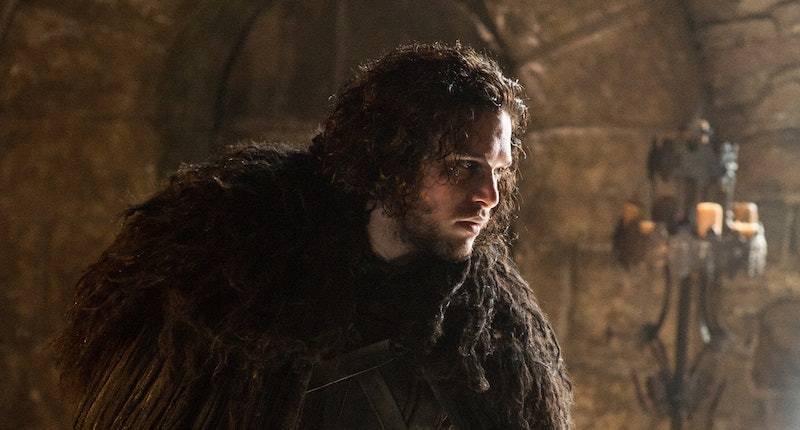 In the world of Game of Thrones, no one is safe from political power plays — or seeing naked women. With the new season of the amazing HBO show premiering on Sunday, April 15, fans everywhere want — no, need — to know: will we see any naked men on Season 5 of Game of Thrones? Game of Thrones and HBO are pretty much constantly targeted for being really into showing naked ladies — but not so much the fellas. Sure, we've seen Hodor's little Hodor and a random warrior's peeing penis, but when you compare the amount of vaginas and breasts in the last four seasons of Game of Thrones to the amount of dong, there is an enormous imbalance.

Now, let's get one thing straight here: I don't want more male nudity on television just to ogle men's genitalia. I am coming at this as a person who supports equal opportunity nude scenes. I'm not a prude, but I know for a fact that the sexualized (and non-sexualized) nudity of women in television and film is exponentially higher than the nudity that is shown — sexual or otherwise — for men. And though I love the show, Game of Thrones is one of the biggest offenders of my nude scene equal opportunity law.

Just because women are being objectified for their bodies doesn't mean I want men to receive the same unfair treatment. But Game of Thrones has made it clear that its nudity (to match the books that the show is based on) is here to stay. And I'd say the show bathes deeply in both the female-nudity-objectification pool and the female-nudity-for-story pool. But regardless how the nudity is being use on Game of Thrones, (uh, spoiler alert) when a man and a woman are having sex, they usually both tend to have their genitalia out. Imagine if Game of Thrones shared fellow HBO show Togetherness' balls-equality policy — we'd be seeing literally hundreds of scrotums.

Back in 2011, author George R. R. Martin knew the male nudity on the show was an issue saying, "I've got a few letters from gay fans who, while they were pleased by the naked male sexuality, were upset that the penises were not actually erect." Although this is one small step for peoplekind, it does make me curious as to why Martin mentioned homosexual male fans rather than the seemingly more populous heterosexual female community? Ah, but that's a rant for another day.

With the pivotal (and much talked-about) Cersei nude scene in Season 5, will we be seeing any more male nudity to even out the playing field? Here are some potential candidates based on the Season 5 trailers alone.

We've already seen Kit Harington's derriere (well, it actually wasn't his butt), but will we see (literally) more of Jon Snow this season? Harington said he was on set more than any other actor for Season 5, so though we will be seeing a lot of Jon Snow, it doesn't mean he'll be naked (especially since Ygritte is no longer with us — sad face). But Harington understands the show's nudity issues, telling The Independent, "I do think there should be an equal amount [of male and female nudity] but I think it’s wrong to say there isn’t any male nudity in Thrones."

Although Stannis's right-hand woman, Melisandre, is often naked, would Stannis ever bare all (for the sake of winning the seven kingdoms — of course)? Just like he leaves decisions to Melisandre (like burning bodies at the Night's Watch and taking over the North), the first trailer of Season 5 make it look like Stannis will continue to leave the nudity to the Red Woman. Boo Stannis!

The second trailer for Season 5 briefly shows Ramsay Bolton — the sickest of the sickos on Game of Thrones — presumably having sex with a young woman. Oh, how I fear for her (and for us viewers) since the scene is bound to be disturbing. I know I've been advocating for male nudity, but I don't think Ramsay (nor Theon Greyjoy — whom Ramsay castrated) is the solution to that if the show doesn't want its viewers to be emotionally scarred.

Season 5 is promising us a wedding between baby King Tommen and Margaery Tyrell (if at first you don't succeed, try, try, try again), but as sexually exploitive as Game of Thrones can be, there is no way they will get graphic with this couple's wedding night. (I feel gross even bringing it up.) Yes, the actor who plays Tommen isn't as young as his character (Dean-Charles Chapman is 17), but I think it's extremely safe to say there will be no nudity surrounding these two consummating their marriage — and if that goes for Chapman, it better go for Natalie Dormer too. (Right, HBO? Right?)

Michiel Huisman, who is the second actor to play Daario, bared his butt in Season 4 when Daenerys ordered him to strip for her. Fans everywhere cheered — and even Playgirl got excited and said they wanted Huisman to model for them. With Daario and Daenerys continuing their sexual dalliance, Daario may be our best chance of seeing male frontal nudity in Season 5. Since those two could win best-looking couple on TV, I can't imagine anyone objecting.

Based on the trailers for Game of Thrones Season 5, I'm not comfortable saying we'll definitely see any full frontal male nudity. Sigh. But one never knows considering most of the females that are naked on the show are just extras and not main characters. But until a penis returns to Game of Thrones, I'll just be nodding my head in agreement with these women of CollegeHumor.