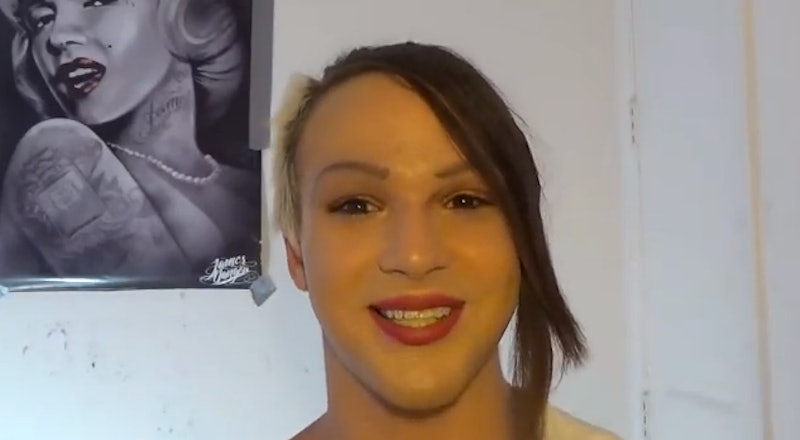 Known on YouTube for both her beauty advice and her testaments to the abuse transgender youth face at the hands of their peers, transgender teen Taylor Alesana committed suicide on April 2 after struggling through a lifetime of bullying. Joining Zander Mahaffey, Blake Brockington, and Leelah Alcorn on a long list of teens who similarly felt that the world did not accept them for who they were, Alesana and the tragedy of her loss speak to our society's rampant intolerance of those with transgender and other LGBT identities.

In her YouTube videos, the 16-year-old from San Diego County addressed her viewers with a fun, lighthearted spirit and compassion toward those who have faced discrimination like her. In her introductory video back in October, Alesana, who was assigned male at birth, told her followers that bullying first became a problem when she came out as bisexual while still presenting as male: "I feel for anyone that's even just a little bit different. They know what bullying is like."

In another video in December, Alesana appeared dressed in masculine clothing and explained that she had to go back to presenting as male "for my own protection. I was being bullied a lot at school." She recounted that a peer had gotten hold of a picture of her in a bathing suit that was circulating around the internet with comments using words like "faggot."

The North County LGBTQ Resource Center that Alesana attended also lost another member to suicide last month. “It’s not OK to make fun of someone because their gender identity is different from what they were assigned at birth,” the center’s executive director Max Disposti told the LA Times.

Following the tradition begun with #HisNameWasZander and #HerNameWasLeelah to commemorate transgender suicide victims using their correct names and gender identities, supporters have been rallying around the hashtag #HerNameWasTaylor.

But incidents like these are preventable, and we can carry on Alesana's legacy by speaking out against and refusing to participate in the dehumanization of transgender people. To all the LGBT youth out there who feel surrounded by people who do not accept them as they are: Please know that many of us do support you want to put an end to the unacceptable ignorance and hate that cause tragedies like this.Images: XxTayloralesanaxX/YouTube; nøname fieri 击, stumpilicious||35/Twitter