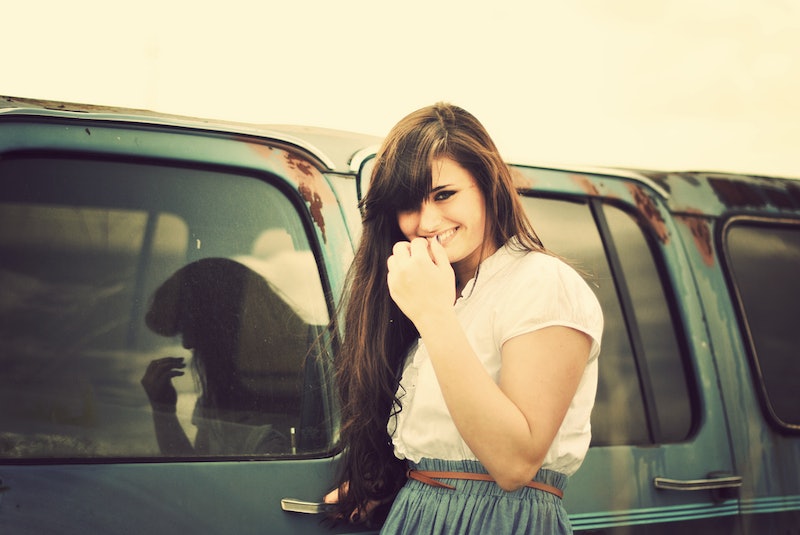 From an early age, your parents probably taught you that there were certain behaviors — like fidgeting in your seat, being obsessed with chocolate, or chewing on your fingernails as if they were Laffy Taffy — were bad habits that would ruin your health and your life, and that there was no way that these bad habits could be good for you in any way. But remember how your parents were wrong about you needing Algebra for the real world? Well, they were also wrong about this — because many of your small "bad" habits are actually good for you.

Yup — those nervous habits that you agonized over for years/gave up for five Lents in a row/went to a shady hypnotherapist to try to quit actually serve a purpose in your life. And the bonuses connected to these bad habits run the gamut from making you feel more focused to protecting your health.

So should you just give in to all your little bad habits? Not necessarily. If biting your nails, for instance, is actually making you feel less confident or genuinely unhappy (i.e. you find yourself embarrassed to shake hands at work because your nail beds are chewed bloody), then by all means, slap on some of that gross-tasting anti-nail biting polish and vaya con dios. But if you've just been beating yourself up over these habits because you're convinced that they're "weak" or show that you're not together, the time has come to chill. Because biting your nails (or oversleeping, or guzzling coffee) are not the acts of wanton self-destruction that many folks like to pretend they are. They're just quirks — quirks that may even be improving your life.

1. Drinking A Lot Of Coffee

People Think It's Bad For You Because: Historically, coffee has been thought to be wildly unhealthy. People have pointed fingers at your daily cup of hot caffeine for decades, claiming it is the culprit behind health horrors like heart attacks, cancer, and stunted growth. Basically, coffee has been blamed for everything short of bewitching the neighbor's livestock.

It's Actually Good For You Because: Not only does coffee not give you a heart attack or make you unable to grow tall enough to reach the top shelf at the grocery store, it's actually full of antioxidants — and studies have proven that coffee offers many health benefits.

Chemicals contained in coffee have been shown to fight Parkinson's, Alzheimer's, Type 2 diabetes, and liver cancer, as well as improve memory. Studies have even shown that women who drink two to three cups of coffee a day are 15 percent less likely to be depressed than their caffeine-eschewing sisters. So chug away (though you might want to stick to regular coffees, not crazy coffee drinks that are full of chocolate chips and ice cream and candied bacon and what-have-you).

People Think It's Bad For You Because: Sleeping in means that you're lazy! And also by the time you wake up, the lines for brunch are really bad.

It's Actually Good For You Because: Waking up according to when your circadian rhythms tell you it is time to wake up — rather than when your alarm goes off — may keep your metabolism up. We're a nation of undersleepers, and those who look like they're oversleeping may just be getting an adequate amount of sleep for their bodies. They may also be spared some of the problems that plague the chronically underslept, like overeating junk food — folks who under-sleep are more likely to eat larger portions of less nutritious foods. So really, if you think about it, sleeping extra is kind of exactly like working out, right? Right?

People Think It's Bad For You Because: You're bringing everyone whom you complain to down with your negative energy. Plus, suppressing your emotions and pushing them down as deep as you can is the American way!

It's Actually Good For You Because: Always looking on the bright side of life doesn't necessarily make you a happier person. Rather, being realistic about your life — both the good and bad aspects of it — has been shown to yield a healthier overall mental outcome.

In fact, University of Texas psychologist James Pennebaker conducted a study which found that people who suppress their negative feelings have worse physical health than people who are unafraid to get in touch with their own Debbie Downer. So complain about your apartment, the economy, or what passes for a "large" serving of curly fries these days, confident in the knowledge that you're doing it for your own good.

People Think It's Bad For You Because: Germs! Everyone knows your hands are covered in germs, and sticking them in your face hole is a one-way ticket to Stomach Flu City, with local stops in Feverville and the Lower Gastrointestinal Distress District. Also, that clicking sound you make when your teeth bite down on your nail is horrifying.

It's Actually Good For You Because: Yes, biting your nails means introducing germs directly into your orifices. But that isn't necessarily a bad thing. Some doctors have theorized that this small-scale exposure to germs help you build up your immunities, making you less likely to get sick in the long run. You're on your own with that biting-clicking noise, though. Shudder.

People Think It's Bad For You Because: Well, how could it be good for you? It doesn't have any nutritional benefits, it can make your jaws hurt, and it can lead to discord with your cubicle-mate, who wants to murder you because you spend so much of the day audibly snapping your Bubble Tape.

It's Actually Good For You Because: Chewing gum focuses us. Gum chewing has been proven to be a better study and test-taking aid than caffeine, and a recent study of students at St. Louis University found that those who were given gum to chew outperformed their gum-free peers on a battery of cognitive tests — a boost that went away once the gum had made its way to the underside of everyone's chair.

Popping some of the bubble stuff gives you a temporary advantage over your peers whose mouths are full of boring things, like teeth or tuna salad, so why not roll with it?

People Think It's Bad For You Because: Being messy shows that you have no discipline. Is it really that hard to make the bed? Or put your dishes in the sink? Or store your clothes in your closet, instead of keeping them in a giant lump in the middle of your floor that is the exact size and shape of a reclining Great Dane?

It's Actually Good For You Because: Messy habits are connected to greater creativity, and messy people have been found to be 36 percent more efficient than their neatnik cousins (who probably waste way too much time Swiffering stuff to really get anything done). And messiness can even have health benefits: Dust mites, for example, have a harder time surviving in messy conditions like unmade beds, according to a study conducted by Kingston University, which means that being messy can be good for those with allergies.

7. Being Hooked On Chocolate

People Think It's Bad For You Because: Ugh, are you a Cathy cartoon? Chocolate is all sugar, with no nutritional benefits, and tons of empty calories! Go pretend you like the taste of kale, like a real mature adult.

It's Actually Good For You Because: Chocolate is full of a chemical compound called flavonoids, which can help prevent everything from cancer to stroke — and while dark chocolate gets all the press as the "healthy candy," milk chocolate contains flavonoids, too. But white chocolate isn't technically real chocolate, and thus doesn't boast any of these health benefits — so best drop that sale rack Easter candy back where you found it.

People Think It's Bad For You Because: What are you, five years old? Fidgeting is thought to be a sign of being unable to focus, refusing to pay attention, and otherwise making a mockery of your English class lecture on "The Meaning of Trees In The Work of Nathanael Hawthorne."

It's Actually Good For You Because: Fidgeting counts as exercise. I know, what's next? Watching Jeopardy counts as passing the bar exam? But seriously: fidgeting is actually classified as a form of "non-exercise activity thermogenesis," a category which covers the small activities we do all day long that burn calories.

And researchers at the Mayo Clinic found that all that wiggling in your seat, compulsively tapping your foot, and otherwise annoying your co-workers increases your metabolism and can play a positive role in our overall physical fitness. So squirm away in that quarterly staff meeting! You're just looking after your health. I think your boss should understand.

More like this
An Expert Weighs In On The Viral Raw Carrot Salad Trend
By Alexis Morillo
These 4 Zodiac Signs Make The Best Bridesmaids
By Nina Kahn
The Zodiac Sign Pairs Most Likely To Have A Sibling Rivalry
By Kristine Fellizar
12 Aphrodisiac Desserts To Spice Up Your Valentine’s Day
By Kaitlyn Wylde
Get Even More From Bustle — Sign Up For The Newsletter
From hair trends to relationship advice, our daily newsletter has everything you need to sound like a person who’s on TikTok, even if you aren’t.