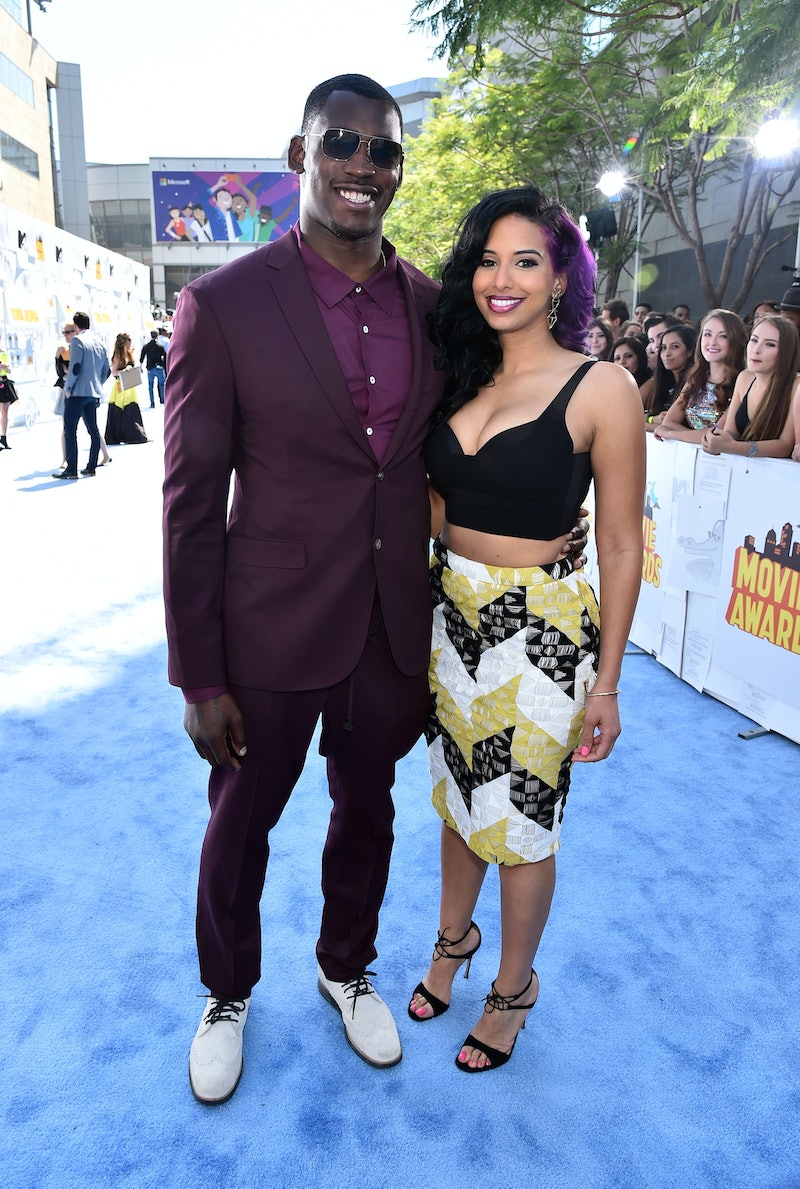 You know that friend who always gives you prime dating advice? That's Nessa, a radio personality and MTV darling whom you probably know from panel show Girl Code. Girl Code's Nessa's given the word on everything from plastic surgery to hooking up with a friend's ex on the TV show and her advice is a solid substitute for whenever your own BFF isn't responding to your stress texts. Nessa was on the red carpet for the MTV Movie Awards with her boyfriend, 49ers player Aldon Smith, and talked to us about the thing we all secretly want advice on — relationships.

Nessa admits that she hasn't always held the same philosophy when it comes to the proverbial romantic chase. "I think you sometimes have to let them know you like them, but you don't have to make a move on them... you shouldn't be aggressive about it. I think maybe I told girls [in the past] that you could speed things up in that way, but you shouldn't."

Nessa also has a theory on why some women end up with jerks: "I think girls who end up with douchebags probably have been so sheltered that they want someone who makes things a little risky for them." Luckily for Nessa, that hasn't happened to her: "I haven't dated one yet, unless Aldon here breaks my heart!"

As for the worst piece of dating advice she's received, it's all about the break. She says: "Go have sex with other people on your break, that's the worst... I think when we go through tough times the automatic response from people is like, 'Oh, forget that, you have this guy and that guy, go have sex with them' and I was almost weirded out by that, like, 'Why? I'm going to cry if I have sex with them because I'll be thinking about this guy.' I don't think you should sleep around with other people unless you want to. Don't do it to try to get over someone."

Luckily, Nessa doesn't have to deal with that in her relationship with Smith — it works. "He's really fun... he's very adventurous, and I love being adventurous." As for the thing that keeps Smith happy, Nessa says it's actually very simple: "Let them play FIFA, Grand Theft Auto... that's how you keep a guy happy."Smith definitely agrees: "Two hours on video games a day to get it out of our system."

Of course, it's not all video games for the couple. "You have to travel with someone," Nessa says. "That's how you determine if you really love them. If you can stand them, great, if not, that's a sign."

What's Nessa's dealbreaker? "For me, it's lying, because to me, you have nothing to lie about [in a relationship.] Either we're going to make it through it or not. We will or we won't. Give me a chance to make a decision off the truth."

More like this
It’s Official: 'The Bachelorette' Is No Longer A Fairy Tale
By Samantha Allen
Everything Jarrette & Iyanna Have Been Up To Since 'Love Is Blind'
By Brad Witter
'Indian Matchmaking's Pradhyuman & Ashima Have Made No Secret Of Their Marital Status
By Brad Witter
Fans Are Convinced That 'Love Island's Gemma & Luca Have Secretly Split
By Frances Stewart
Get Even More From Bustle — Sign Up For The Newsletter