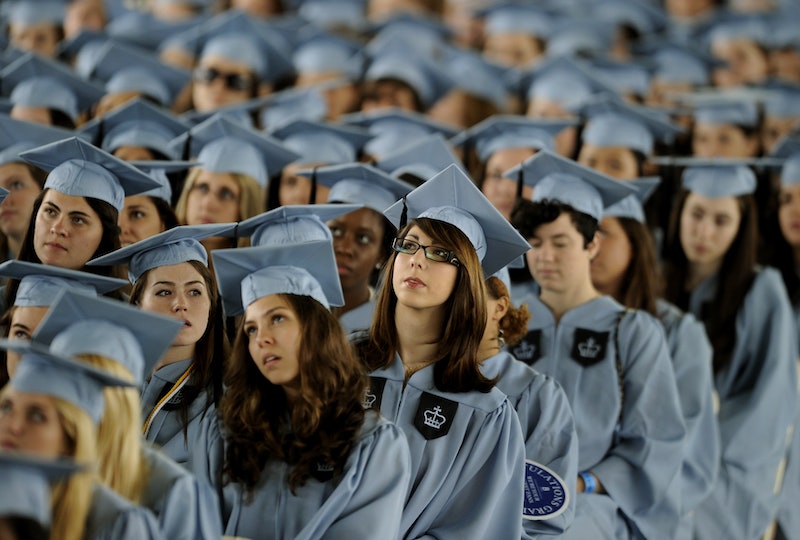 Going to a women's college may not sound like the most desirable choice at first, but attending one of these schools may just be the best decision you ever make. Unless you've done a lot of research on the topic, chances are there are a lot of things about women's colleges you don't know — like how they have a slew of impressive alumnae (hi, Hillary Clinton!), and hire a majority of female faculty members. But it's worth doing your research — there are tons of hidden benefits to going to one of these schools that you should consider as you make your final decision.

Women's colleges still matter, because they foster female empowerment in educational, social, and work settings. When you're surrounded with strong, smart women who strive to be their best, you become inspired to do the same. Not to mention, women's colleges also have some of the chillest dorm atmospheres around — that means no awkward post-shower run-ins with guys, and by far some of the most close-knit residence halls you'll come across. All girls means all good vibes — and someone is guaranteed to have a spare tampon they will happily throw your way.

Forget the stereotypes you thought you knew about women's colleges. These are the reasons attending one will be your best decision ever.

1. Every night is girls' night

Although it's possible to make girls' night a priority no matter where you go to college, women's colleges tend to foster girls' nights out — as well as girls' nights in. When you live in an all-female dorm, it's kind of like a never-ending slumber party, right? Right.

2. There's less sexism in the classroom

While many women's colleges do have co-ed classes (and classes with male professors), your chances of running into mansplaining in the classroom is extremely minimal. Sexism is dismantled in the educational setting by informed discussions and an increased awareness of women's issues.

From female professors to renowned commencement speakers to impressive classmates, inspiring women abound at women's colleges. And instead of creating an environment of competition and jealousy, being constantly surrounded by successful women only gives a sense of encouragement and inspiration.

4. Women are encouraged to excel in typically male-dominated fields

As more women go into STEM, gender inequalities in the field start to even out. However, in many college classrooms, men still largely outnumber women in science and technology courses. That's not the case at women's colleges — with female-dominated STEM classes (and a higher percentage of female professors), students are encouraged to excel in fields that haven't always been welcome to them.

Unfortunately for many colleges, "core curriculum" just means reading a lot of books by dead white men. And while we don't have any personal qualms with Sophocles or Hemingway (OK, maybe we do have some qualms), it would be nice to read more than one token book by a female writer. Thankfully many women's colleges expand their curriculum to emphasize female writers, well-known and not, to give a more diverse perspective.

6. You learn that feminism is so much more than "girl power"

As more and more women's colleges begin to admit transgender students, these schools show that trans-exclusive feminism isn't really feminism at all. When feminism is a constant conversation topic, students become more aware of the intersectionality of feminism, and learn how to be more inclusive with their beliefs.

7. You come out with a huge network of successful women

Worried about building your professional career? No problem. Not only will you graduate with a class of driven people, but your career development office will also be happy to hook you up with notable alumnae in your field — who will be thrilled to give you a hand.

8. Everyone is open about, well, everything

Out of tampons? Someone has one. PMS-ing? Someone's got Pamprin. And a heating pad. And is down to complain and watch Disney movies with you until you feel better.

9. There are no jokes about "MRS" degrees

Finding a college boyfriend is great, but college is also a time for finding yourself and your career — and your best friends for life.

And going to a women's college guarantees that you'll have plenty of incredible women you'll be proud to call your friends.