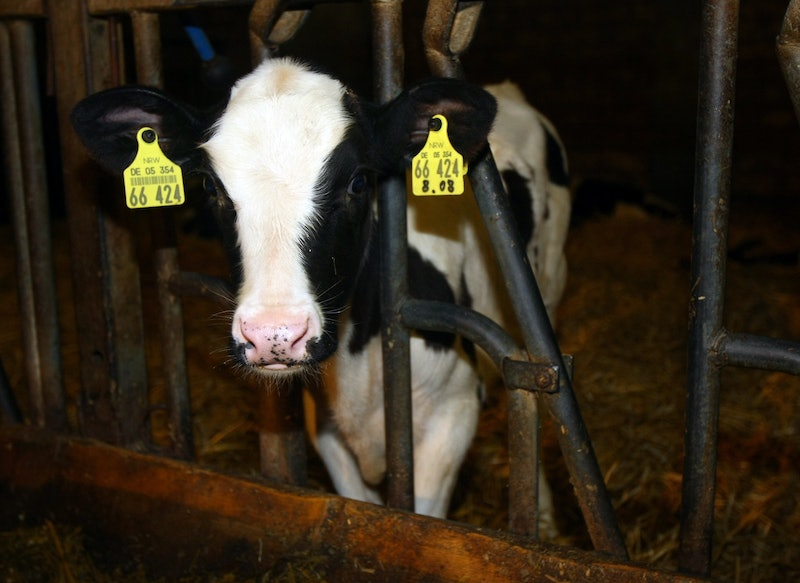 There are more reasons than ever to be a vegan or vegetarian, from lasting vitality to clear skin to incredible, alternative Thanksgiving menus. But there is one reason compelling more and more people to live an animal-product-free life: animal agriculture is destroying our planet. It is the leading cause of climate change and rainforest deforestation, and it is responsible for the majority of species extinction, as well as nearly half of the United States' water consumption.

Filmmakers Kip Andersen and Keegan Kuhn created an eye-opening documentary called Cowspiracy in 2014, and when I saw it recently, I nearly fainted into my yogurt (which I immediately felt guilty for eating). Like An Inconvenient Truth, Cowspiracy is uncomfortably confronting; the data Andersen and Kuhn provide shows that the most common foods we consume on a daily basis are sucking out the life of planet Earth.

But we have to face the music, especially with the California drought on our hands. We don’t have time to be complacent about our world’s dwindling resources. Here are five ways animal agriculture is affecting the planet that we have to face.

1. It's Wasting More Water Than Anything Else

Most environmentally-concerned people have been trying to take shorter showers and turn off the tap when we brush our teeth. But while these are good habits, the amount of water we save through these actions pale in comparison to how much we could save by cutting out meat.

One hamburger requires 660 gallons of water to produce. Guess how many showers that is. Two months worth. More than two-thirds of all the fresh water in the world is used exclusively for animal agriculture. Even if you simply go vegetarian and not vegan, you reduce your water footprint use by almost 60 percent.

2. It's Taking Up All The Land

Livestock covers 45 percent of the land on this planet. Yes, almost half of the world is now covered with animals harvested for our consumption. Just thinking about the population growth we've seen in the past few decades, it is safe to say we are going to need a lot of that land in the near future. Sadly, in many places that aren't highly regulated by national governments, innocent communities are displaced in order to claim their land for factory farming.

More than 80 percent of Amazon rainforest destruction is due to the animal agriculture industry. Every minute that passes, 36 football fields of the Amazon is deforested to make room for cattle. The consequences of this extend further than just tearing down trees: Innumerable unrelated plant species are lost, most of them vital to the world’s oxygen supply, and environmental activists are killed in the meantime.

Livestock operations have generated more than 500 low-oxygen (or hypoxic) areas in our oceans. Known as "dead zones," these are areas of large bodies of waters, such as oceans and even lakes and rivers, that lack enough oxygen for marine life to thrive. They are even called biological deserts. The agriculture industry is primarily liable for nutrient spills, which compromise the quality of the body of water and extremely reduce the levels of needed oxygen.

The most famous U.S. dead zone lies in the Gulf of Mexico, close to the Mississippi River. An 8,500 mile square area, which is about the size of the state of New Jersey, has destroyed the region’s booming shrimp industry, leaving everyday folks with less food and decrease in income. There are many other similarly impacted waterways, where runoffs cause the global ocean temperature to dangerously rise. Scientists predict this will only continue and by year 2048, we will see fishless oceans due to our careless exploitation.

4. It's A Serious Source Of Air Pollution

Animal agriculture emits 18 percent of greenhouse gases into the air each year; more than all transportation in the world combined, which accounts for 13 percent. It is also annually accountable for more than 32 billion tons of carbon dioxide and 65 percent of nitrous oxide emissions, a gas that stays in the atmosphere for one hundred and fifty years. It’s impossible to deny that factory farming is the leading cause of climate change.

Every minute, animals raised in the United States for food produce seven million pounds of excrement (this does not include farms out of the USDA jurisdiction). One dairy cow produces the same amount of waste in one day as twenty to forty human beings. Altogether, livestock excrement discharges 150 billion gallons a day of methane, a gas proven to be nearly 25 times more dangerous than CO2. Then there is ammonia, which combines with other elements in the air and causes respiratory disorders and contributes to acid rain — more than 70 percent of all ammonia emissions comes from factory farming.

Biologists say we are currently facing a biodiversity crisis named the Sixth Extinction. The last mass extinction of its kind took place 65 million years ago. In 1993, a Harvard biologist E.O. Wilson estimated the planet was losing 30,000 living species per year. And today, it's more severe than ever. Each day, at least one hundred innocent animal and plant species are killed in the Amazon rainforest because of factory farming. Natural predators, such as the Wedge wolf pack in Washington state, are murdered to keep cattle alive, who are only slaughtered not long after.

Forty percent of all fish caught each year are disposed of. And for every one pound of fish that is caught for food, five pounds of unintended marine life are discarded as by-kill. This means hundreds of thousands of whales, seals, and dolphins are being slaughtered, animals that are incredibly intelligent, social mammals (have you seen Blackfish ?!). We are sucking the animal kingdom dry without any consideration for the lasting consequences — even when we aren't eating them.

You don’t have to be hardcore right away and swear off all animal products until the day you die, (although that would technically be the best solution for our planet). Simply being aware of the facts will get us on the right track to being more conscious inhabitants — after all, we sometimes forget that natural resources are not endless.

One mild, gateway option is to be more aware of where your products come from. Instead of supporting the big business of factory farming, have a look into local, eco-friendly small-scale farms in your area. Know where your meat and fish is coming from, how the animals are treated, and what kind of resources are used. It feels empowering to have control over what rolls through your kitchen.

More like this
10 Thanksgiving Alternatives You Can Celebrate This Month
By Katie Mitchell
Joe Lycett Just Took HIs David Beckham Qatar Protest To A Whole New Level
By Sophie McEvoy
Footballer Jake Daniels Shared His Thoughts On A World Cup Boycott
By Sam Ramsden
Iran Has Issued A Death Sentence Over Mahsa Amini Protests
By Catharina Cheung, Darshita Goyal and Maxine Harrison
Get Even More From Bustle — Sign Up For The Newsletter