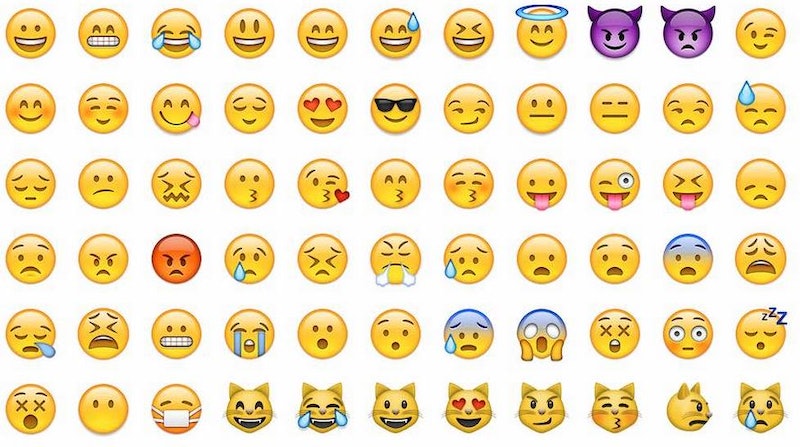 A lot of questions have popped up in light of the new iOS 8.3 update, many of which have to do with emoji. On top of wondering why there's still no taco emoji, though, many of us have found ourselves trying to figure out this other long-standing conundrum: Why are emoji yellow? In the interest of shedding a little light on the subject, I did some digging to see what I could find. For your personal edification, I present to you now the fruits of my labor.

The initial question is actually two-pronged: One, why is the default color for all emoji faces yellow? And two, why does it look like the new racially diverse emoji represent Asian people with a somewhat offensive bright yellow skin tone? Let's start with the second one, as it's easier to explain (albeit still a little lengthy). In short, the yellow emoji in the racially diverse set are not meant to represent Asian people (thank goodness). The implication that it was can probably be chalked up to an unfortunate design oversight. Here's the deal:

As the Huffington Post recently noted, Unicode decides what the shape and description of each emoji is — but it doesn't decide how emoji are displayed on specific devices. That's up to whoever created the device, so the reason they're yellow on iOS devices is because that's how Apple decided they should be (the same goes for Gchat's yellow emoji, by the way). But although Unicode's charts are usually in black and white, their report from last November about the planned racially diverse emoji clarified how they thought the different skin tones should work.

According to the report, the emoji use skin tones drawn from the Fitzpatrick scale, which is a recognized tool for dermatological research about skin color. It consists of six types:

The new emoji reduce these six types into five by combining types I and II, and then leaving the rest alone. So the ones that display as yellow on iOS devices? They're not meant to be part of the official racially diverse emoji set; it's just the default color for all emoji faces, whether they're simple smileys or full heads with hair and everything. They gain their skin tones when you match them with a modifier — that is, holding down on the emoji and selecting the skin tone you want to use from the menu of swatches that pops up as a result. The idea, wrote Unicode, was for the emoji to be as neutral as possible before being matched with a modifier:

When a human emoji is not immediately followed by a[n] emoji modifier character, it should use a generic, non-realistic skin tone — such as RGB #FFCC22, one of the colors typically used for the smiley faces. Dark hair is recommended for generic images that include hair. People of every skin tone can have black (or very dark brown) hair, so it is more neutral.

For the curious, this is FFCC22, according to ColorHexa:

HuffPo suggests thinking of yellow emoji like LEGO people; I also think looking at them in the same way we do characters on The Simpsons might be helpful, too.

But as for why the default color for all vaguely people-shaped emoji is yellow specifically? Unfortunately there doesn't seem to be a terribly satisfactory answer to that one. From what I can tell, it's mostly just an arbitrary choice made by Apple, Google, and so on. I, do however, have a few theories about why yellow made the grade for Apple and Google's Gchat, while colors like blue, green, or red may not have:

And a blue one:

And now a yellow one:

Which one is easier to make out the details on? The yellow one by far. Ergo, it makes sense for it to be the default emoji color.

So there you have it. If anyone more information about the seemingly arbitrary choice to make the default emoji color yellow, I'd love to hear it; in the meantime, though, we may just have to satisfy ourselves with speculation. But hey, at least we know that no one at any of the companies who produce devices and program with emoji think Asian people actually have bright yellow skin, right?