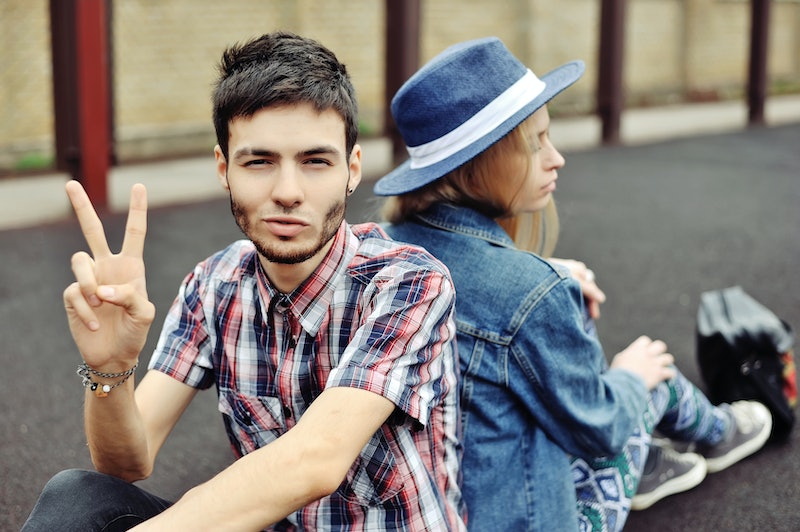 Have you ever stopped to contemplate men's buttons vs. women's buttons? Well, I was riding the subway with my best friend the other day on our way home from a concert in the city. We were wearing matching jackets, or so we thought. We planned to both wear our denim jackets, mine from the men's section of Search and Destroy and his from the women's section of Salvation Army, in honor of the denim-loving artist. During our ride to the Bronx, he pointed out to me that my jacket had buttons on the right side, while his jacket had buttons on the left. I was shocked, as I had never noticed this before.

Having had years of work experience in retail, my friend told me that it's typical for all women's clothing to have buttons on the left, and for men's to have the buttons on the right. Being someone who is constantly contemplating gender norms and binaries, I was immediately curious as to why this was and decided to do some research about it.

The practice originates from archaic clothing traditions dating from the mid-to-late 19th century. During this time, women wore more elaborate clothing than men, which made getting dressed in the morning no easy feat. Layers upon layers of fabric, including petticoats, corsets and bustles (both the name of this publication and a structure women wore under their skirts to expand the fullness of a lady's dress and to keep the skirt from dragging), required a team effort to apply.

According to Live Science , middle and upper class women often had maids to help them dress. All that fastening, tying and buttoning can be tricky, especially when dressing another person. So to make it easier for those dressing the ladies, and since most people are right-handed, buttons were moved to the right side of garments. This made the maids' jobs easier, but to the wearer the buttons were now situated on the left side. Unless you're left-handed, this can be a little tricky to operate yourself.

Clothing has gotten less complicated since then, and ready-made women's apparel is easy to put on without the help of a friend. But hundreds of years later, why are we still manufacturing clothing based on old gender norms, and not on the right-handed or left-handedness of the wearer?

Upon exploring my own collection of button-ups, flannels and jackets, most of my buttoned clothing (which I've acquired mostly from thrift stores) is from the men's department. The button-ups I've bought from women's retail stores are on the floor of my closet, neglected and wrinkled.

As a right-handed person, perhaps one of the reasons why this is true is due to the greater ease of buttoning up a men's shirt!

It doesn't make much sense for buttons to be situated on clothes according to gender anymore. However, keeping with our progressing society in terms of gender recognition and equality, perhaps retail giants like Forever 21 or H&M will become alerted to this in the future, and finally break the cycle of history.