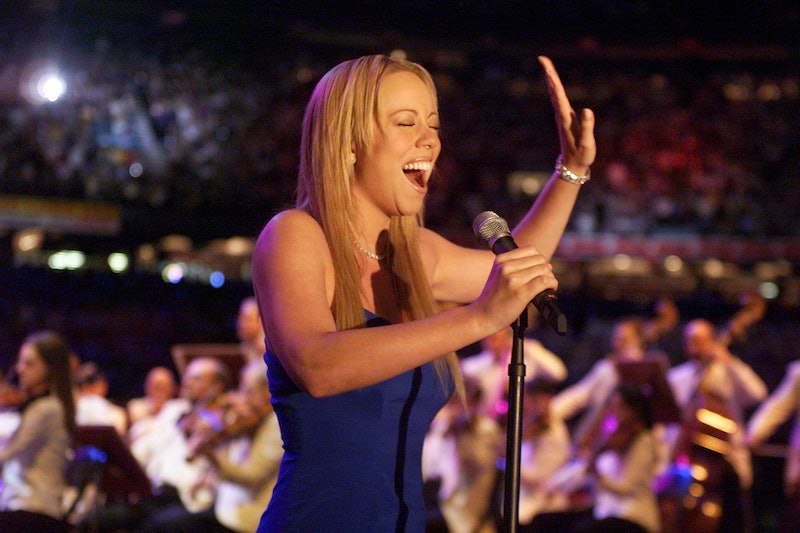 Here's a piece of breaking news...NOT: Mariah Carey, aka the reigning Queen of the Melisma Kingdom, can sing a lot of notes. High notes, low notes, big notes, little notes, medium notes, hot notes, cool notes, this-porridge-is-just-right notes, and so on. But exactly how many notes? What is Mimi's vocal range? How many octaves can Mariah Carey sing? Rather than try (and fail with flying Rainbow colors) to figure out the answers to those questions on my own, I turned to one of my favorite sites on the World Wide Web: The geniuses over at Concert Hotels put together a handy-dandy chart that evaluates the vocal ranges of some of the most popular singers in recent history. And duh, Mariah Carey is near the top of the the list. (She's second only to Guns 'N Roses frontman Axl Rose.)

According to the graph, Mimi sings an F#2, her lowest note, in Jermaine Dupri song “Sweetheart”, and she hits a G#7, her highest note, when she’s whistle-singing away at the end of “Emotions”. Her range spans from octave #2 to octave #7, which means Queen Mimi can hit notes in five out of eight octaves.

I filmed my face as I watched the supercut. Here's a clip of my reaction, part 1:

It's got me feeling emotions, deeper than I ever dreamed of.