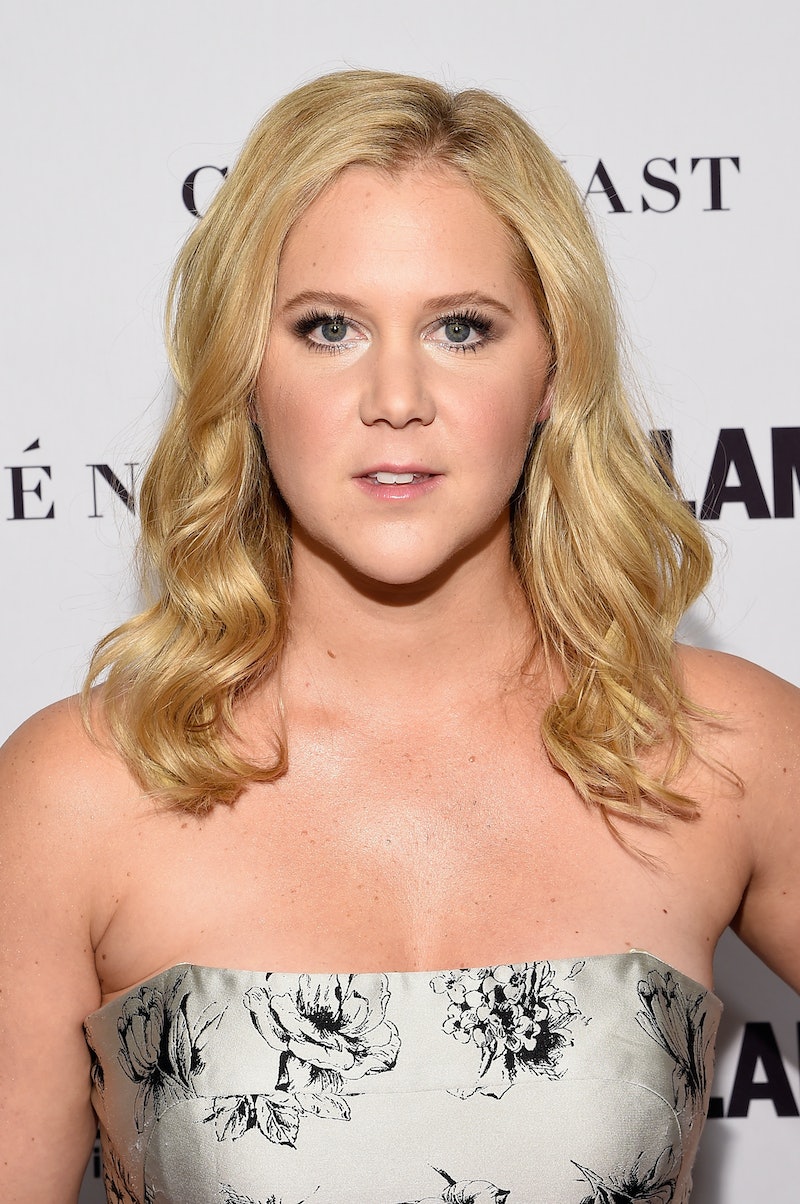 Amy Schumer is a bad bitch. I've never actually used that term before, but it somehow feels appropriate now. Urban dictionary defines the term "bad bitch" as: "Totally mentally gifted and usually also fine as hell." Appropriate? Absolutely. The talented comedian is about to debut the third season of her acclaimed series Inside Amy Schumer on Comedy Central, and is starring in the Judd Apatow-directed Trainwreck this summer. She also hosted the MTV Movie Awards, and is still touring with her comedy.

Those who are familiar with Schumer's stand-up know her humor is not for the easily offended. The blonde bombshell has been deemed a "sex comic," and it's a term she often disputes, saying, "I get labeled a sex comic. But if a guy got up onstage and pulled his dick out, everybody would say: "He's a thinker."

But whether she's talking about sex, relationships, what she had for dinner, or the double standards of modern video games, Schumer has a firm hold on our attention, especially when she's empowering women. From an essay she penned for Cosmo to her 2014 Gloria Awards speech, Schumer has proven to be a compelling and powerful voice for girls and women everywhere. Here's her 13 best pieces of advice on being sexy and confident, from the woman who knows best.

According to Amy Schumer, first and foremost, you need to be comfortable in your own skin: "What I have is unbridled confidence. I am one of the lucky women in this country who can look in the mirror and like what I see."

Find Confidence In Yourself

On not letting others tell you you're ugly, and deciding your beautiful for yourself, she said: "I stood there until something caught my eye. It was my eye. I looked at my little blue eyes reddened from crying and thought, No, they are wrong. I like my frizzy hair. I like how this fanny pack makes Mr. Mistoffelees look. I am pretty, and I'm gonna be just fine. I marched into school the next day with twice as much confidence. I had found it in myself."

Call Out Your Haters

Schumer recalls a particularly painful set: "...No laughter from the crowd. But this time, I didn't just move on. I said, 'You guys are wrong! That was funny.' It broke the tension in the room. I started talking to the crowd, connecting with them more, and taking ownership over my jokes and who I am."

Don't Dwell On Any One Guy — There's Plenty More

On why one guy's opinion shouldn't ruin your self-worth: "Everyone is drawn to confidence, if it's real. So in the same fashion I deliver my jokes, I introduce myself to a guy. I am unapologetic and confident. If it doesn't work out? Next! Why judge yourself?"

Don't Care About What Other People Think

"My real beauty lies in my humor, my strength, the kind of sister, daughter, and friend I am," Schumer said. "But more than anything, it lies in my ability to truly not give a shit what anyone thinks of me."

Respond to Hate With Humor

"The other night onstage, after I said a joke about how I'm superstitious and constantly knocking on wood, which is really embarrassing, especially if you don't know the guy, an audience member yelled out, 'Whore!' I fired right back with 'Why are you saying that like it's a bad thing?' I win." Touché, Schumer!

"I still stand in front of that mirror sometimes with doubts. But even on my worst day when I'm feeling awful, I smile and say, 'You're doing the best you can. Good job, bitch!'" she said.

Hold Onto Your Confidence — No Matter What

"People get mad at confidence and they wanna knock it down," Schumer said. "And you need to know that's gonna happen and just hold onto it. I have moments all the time when I don't feel good about myself and I don't feel comfortable in my own skin, but I always find my way back."

You Determine Your Self Worth

At the 2014 Gloria Awards and Gala, Amy Schumer dropped some seriously amazing words of wisdom. She said: "I am a woman with thoughts and questions and shit to say. I say if I'm beautiful. I say if I'm strong. You will not determine my story — I will. I will speak and share and fuck and love, and I will never apologize to the frightened millions who resent that they never had it in them to do it. I stand here and I am amazing, for you. Not because of you. I am not who I sleep with. I am not my weight. I am not my mother. I am myself."

To Maintain Confidence, Cut The Bad People Out Of Your Life

"As I'm getting older, what I'm doing now, is I'm just making sure that I'm the best looking one of my friends. It's really easy; I cut certain people out of my life. I now hand select strangers off of Facebook and surround myself with real trolls and reptiles."

Don't Apologize For Being You — The World Needs Your Unique Voice

""I didn't grow up hearing any women really delving into that side of themselves. So I thought, 'OK, maybe I can be this person for women and for men just to hear the women's perspective in a less apologetic, honest way.'"

Even Your Toughest Critics Can't Tear You Down

"I want to throw my hands in the air, after reading a mean Twitter comment, and say, 'All right! You got it. You figured me out. I'm not pretty. I'm not thin. I do not deserve to use my voice. I'll start wearing a burqa and start waiting tables at a pancake house. All my self-worth is based on what you can see.' But then I think, Fuck that."