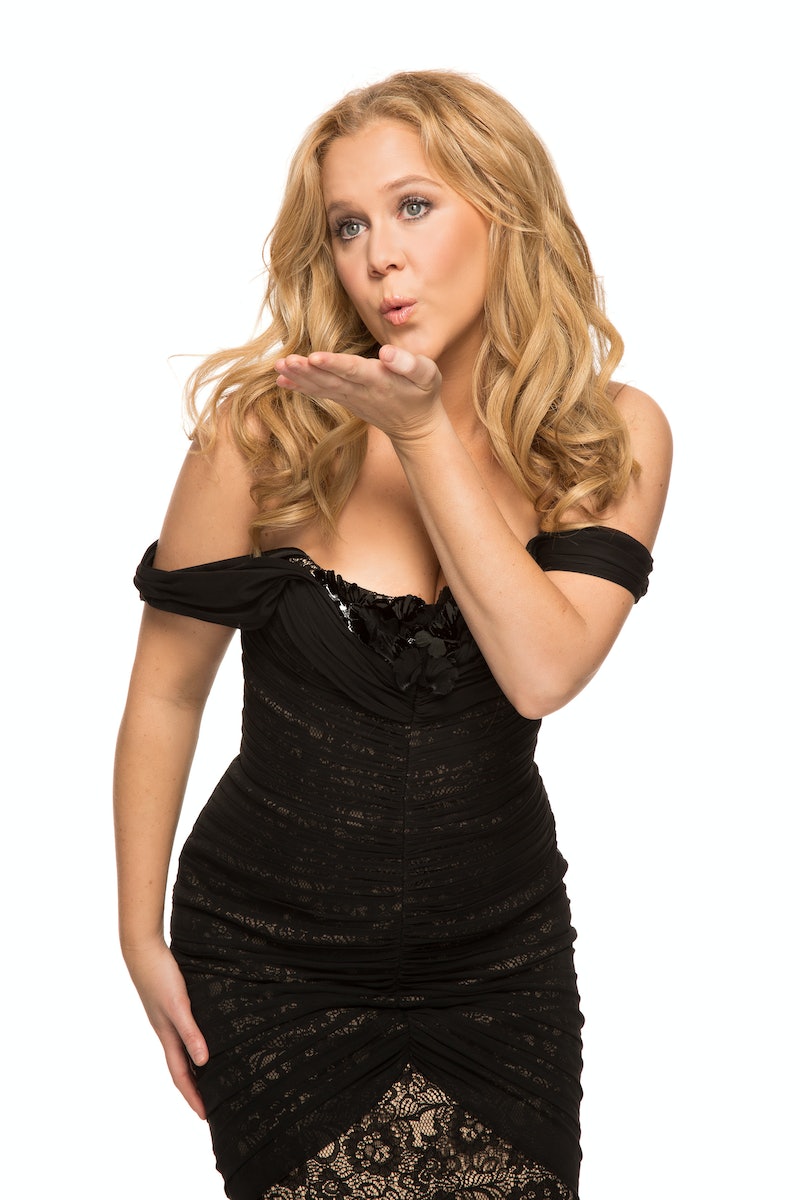 Remember when your best friend got her braces off and she called to mind some kind of beautiful, blossoming swan to you? This is precisely how I see this year's MTV Movie Award's host: The body positive Amy Schumer. She has undoubtedly had a life changing year (even is the jury's still out on whether it was better than the year Caitlin (my BFF) got her braces off).

Amy wrote and starred in her own movie, Trainwreck, which comes out this July (hold on, ordering ticks) in addition to hosting one of the biggest awards shows on Earth. And it's impossible not to notice that homegirl has really come into her own sartorially as well: Sister-friend's fashion game has been on point.

But that's not why I love her. I love Amy because she's the girl at the bonfire that has everyone spitting out beer from their noses all night long from sheer laughter.

I know it's part of her shtick to make fun of her appearance and be self deprecating, but I honestly think she's hot as hell. And I love that she sends the message that she doesn't give a sh*t (pardon my French) about what anyone thinks. Amy does her thing (hilariously) and doesn't waste her time listening to the critics. Additionally, she promotes being confident and accepting of your own body, no matter what size that body may be. She doesn't try to pretend she's something she's not and I adore her for it.

Ames (assumed nickname) makes the world laugh its bottom off and does it with style to boot. So let's take a look at 15 times Amy looked amazing and was a body positive role model for all you cute gooses.

I'm devastated that the video is no longer available, but if you haven't read her amazing speech from the Gloria Awards and Gala, it is a must read. You will laugh (I peed a little), you will cry (I wept), and you will probably clap honestly. I have never heard/read a speech that spoke truer to what we experience as women in trying to gain confidence and realize our self worth. Amy is eloquent, hysterical, and beautiful. It's nearly impossible to not whisper "f*ck yeah" to yourself after reading it. Favorite part: "I am not who I sleep with. I am not my weight. I am not my mother. I am myself. And I am all of you, and I thank you."

In this hilarious interview that had Ellen in stitches, Amy talks L.A., Dianna Agron, and dating. Post cracking up, you will realize how hella hot she looks in a black and white (cue the Michael Jackson song) jumpsuit. While she makes fun of her body, you can tell it's all in good fun. And the video ends with her talking about how she found the perfect "scone" with a a glorious app called Foodspotting last time she was in Los Angeles. That's my girl.

3. Arriving At The MTV Movie Awards

How cute is this picture with her sister and road manager, Kimberly? This tugs at my heart cause, well, I have a sister. Also, I can't help but appreciate her side-boob here. They're both killing it.

4. On The Cover Of Entertainment Weekly

Correction: Naked on the cover of Entertainment Weekly. Also, naturally surrounded my mini, empty bottles of alcohol. It was her idea to go naked, for one. And she Tweeted a thanks to the mag, saying, "I want to especially thank @EW for not airbrushing me. For real very cool. Thank you. Proud size 6 yo!" Schumer looks awesome and even caught the attention of another body positive role model: Sophia bush Instagrammed a topless pic of herself holding the mag, captioned, "@amyschumer local single in your area." We're with you girl.

5. At The Gotham Awards

Amy looks gorgeous in this cleavage baring, metallic mini with side-swept hair at the Gotham Awards where she presented Tilda Swinton with the Gotham Actor Tribute.

6. Glamour Women Of The Year Awards

Here, Schumer looks totally ballin' when she gave an ode to the late Joan Rivers at the Glamour Women of the Year Awards. It should be noted that she Instagrammed this same pic captioned, "What an asshole." And I couldn't possibly love her more.

Amy, with her sister Kimberly, looks drop dead gorgeous here wearing a décolleté black dress in a #tbt pic she posted from before the Vanity Fair Oscar party.

Amy stuns in a grey/blue satin mini dress at the Creative Arts Emmy's.

Here, wearing a plaid shirt paired with a leather mini and black ankle booties, Amy looks that lethal combination of sexy and cute. You know what I'm talking about if you're obsessed with Crazy, Stupid, Love like me.

10. Night Of Too Many Stars Stand Up

In this hilarious video, one of the things she talks about is getting ready with a trainer for her new movie. I love how she says that it's "crazy" to ever go hungry. You said it girl.

Here's Amy looking amazing in a classic white dress that dips in the back and statement pink heels at Christian Siriano's show.

Challenge accepted. Amy adds a ridiculously funny spin on the ALS challenge in this Instagram video where she's not sporting much material. I know I didn't mind seeing that much of Amy, covered in clam chowder no less.

Amy looks hot as hell posing with fellow funny lady Bridget Everett, who has often appeared on Inside Amy Schumer. That sparkly charcoal-colored dress is doing all the right things for her.

Here is Amy at the GQ Men of the Year party arrivals looking sexy in a red dress and pumps to match.

So there you have it. Amy is gorgeous inside and out. Rock on diva.