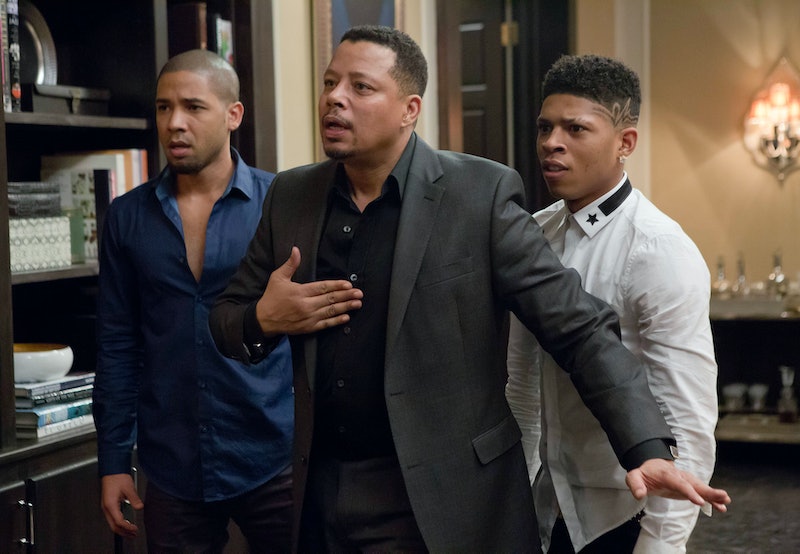 It's been a full month since the Season 1 finale of Fox's Empire and life just hasn't been the same. I've found no matter what I've tried — playing the soundtrack on repeat, reliving the best moments via clips and GIFs — it still doesn't fill the void created by the Lyon family's absence. It's time to fully admit that I am knee-deep in the stages of Lyon withdrawal and I have no idea when it'll end, because no Empire Season 2 premiere date has been announced yet.

“The decision is Fox’s to make," Empire showrunner Ilene Chaiken said about the series' return in an interview with Variety last month. "They love the show as much as we do. Whatever decision they make I will believe in. And we will be everything that Empire is in now in season two.” The question of how many episodes Season 2 will bestow on viewers is also up in the air. Will the big hit still believe less is more and stick with a 13-episode season or expand to a full 24-episode run? Chaiken told Variety it remains to be decided. Look, no matter how much Empire we get, I'll just be so happy when its back.

Do you feel the same way? Are your Wednesdays painfully empty, too? You must be suffering from Empire withdrawal as well. If you're not sure, here are the stages (which are kinda like the five stages of grief) to help you understand all of those feelings, so we can all get through this difficult time together.

For the first few weeks, I'd continue to still get excited about Wednesdays, only to realize Empire was no longer airing new episodes. One week, I actually turned to Fox, only to find that the Lyons were not on at their regularly scheduled time. Sadface.

So I found solace the only way my generation knows how: Rewatching old scenes online and looking through my favorite GIFs (like the one above). It also helped that I convinced one of my best friends to give the show a try and I got to relive some of the moments as he Gchatted it to me.

I've said it to myself a dozen times: There has to be news about Season 2 out there somewhere. Someone from the cast must be talking about it on the internet. So far, no one has revealed anything but small, cryptic clues.

Then, it became time to try to fill the Empire void with — gasp — other TV shows. Netflix's Unbreakable Kimmy Schmidt did help as I watched its 13 episodes. I'm excited about the returns of Veep and Game of Thrones. The Voice sometimes airs on Wednesdays, so that distracts me from missing the Lyons.

But it still isn't Empire.

Ultimately, I have to face the fact that Empire will be back in due time. So for now, I'll enjoy the memories, clips, and GIFs of Season 1, open my heart to trying new TV shows, and eagerly await the return of Lucious Lyon and his family.

Because I trust that Season 2 will totally be worth the wait.