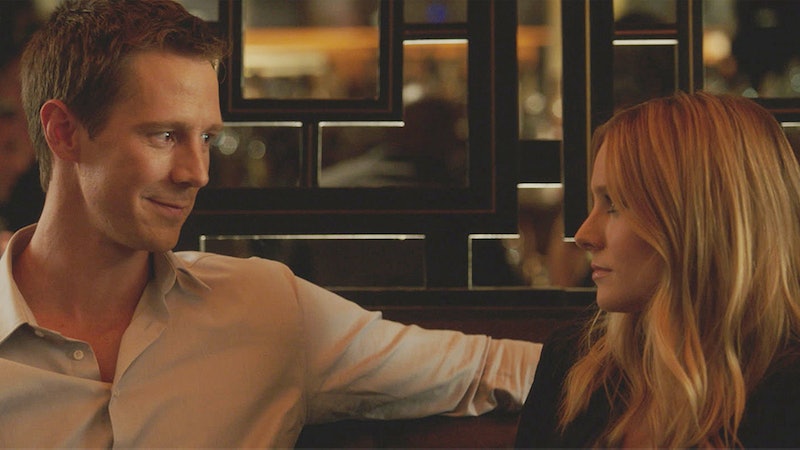 In Neptune, where Veronica Mars' world was filled with mysteries, only one thing was certain: her undeniable attraction to the school's local "psychotic jackass" — as Veronica calls him in the Veronica Mars' pilot — Logan Echolls. Not that it was love at first sight: Logan and Veronica's romance was actually birthed from the death of his girlfriend/her best friend Lilly Kane. But, after the two realized their love for one another Veronica Mars ' Logan and Veronica became one of the most memorable pairings in television, with a fandom — LoVe 'shippers — stronger than superglue.

There are so many things that make Veronica and Logan no less than epic. Their torrid bathroom make-out scenes, their heated banter, their affinity for crime-fighting — it isn't your average relationship, to say the least. Still, it comes with a high quantity of drama: As Veronica and Logan have both said to each other, their love is epic, "spanning years and continents... lives ruined, bloodshed, epic." For that, we have to reassure ourselves that Veronica and Logan is the romantic end game that we fans deserve.

Here are a few of the reasons that Veronica and Logan were the best 'ship of this series. Intense spoilers ahead — but let's be real, any hardcore LoVe shipper has already watched the show and the movie, twice.

Truth is, Logan treats Veronica not-so-well at the series' beginning. He's rich (literally) with entitlement, fueled by anger over Lilly's death (which he blames Veronica for partially). But we get to understand why he's this way — that whole abusive/murderer father thing, for the record — and know that deep down, he's got a soft side. And Veronica? She kinda-sorta brings out that soft side.

Logan and Veronica's snark is the snarkiest

Even before their game-changing kiss, Logan and Veronica's mouths were exchanging snarky lines as hostile as they were flirtatious. Logan is one of the few people in Neptune that always had a strong offense in a battle of wits — a battle that Veronica was normally the champion. It only furthers the fact that on some intellectual level, Logan and Veronica were equals.

The Duncan that we know from flashbacks, really, makes a great first high school boyfriend for Veronica. But, once something horrible happens (in this case, the murder of his older sister and Veronica's BFF Lilly Kane) their relationship takes a major hit, and both of them change — even during round two of their relationship in Season 2, it's clear that the two of them are not who they used to be. Extending any romantic relationship past its expiration date is never a recipe for success.

Even when things got terrible between Veronica and Logan (which was often), Logan was usually the first one to come to her rescue

Finally putting his violent streak to use, Logan saved our fair-haired heroine many of times. There is a loyalty to Logan that, although it wavers, never truly breaks — even when things get way too real (the entire Season 2 finale confrontation with Beaver, for instance).

The overwhelming fanbase loves to see those two crazy kids together, and majority rules

In a battle of Team Piz versus Team Logan, there is only one clear winner — and it's Logan. Yeah, Piz is the safe choice, but when do you ever want to WATCH the safe choice? Ryan Hansen summed it up like only Dick Casablancas could: "I like Piz, he's alright, but oh, Logan, he's such a heartthrob, I love him." See? Even the cast is on our side.

The English language 'ships them together, what more proof do people need that they're meant to be?

Their couple portmanteau, the name blazoned on their ship, the combination of Logan and Veronica — wait for it — is literally LoVe. I mean, come on, guys.

Although Logan and Veronica have a love/hate, on/off thing that breeds complications, the passion and drama makes them a couple worth fighting for.

More like this
Why You Loved 'One Tree Hill' So Much — And Still Do
By Sabienna Bowman and Radhika Menon
Emma Thompson, Lashana Lynch, & Stephen Graham Lead Netflix’s 'Matilda'
By Sophie McEvoy
Neil Patrick Harris Will Play 'Doctor Who's “Greatest Enemy” Yet
By El Hunt
Jennifer Aniston Is Still Wearing That 'Friends' Dress She Stole From Monica's Closet
By Jake Viswanath
Get Even More From Bustle — Sign Up For The Newsletter