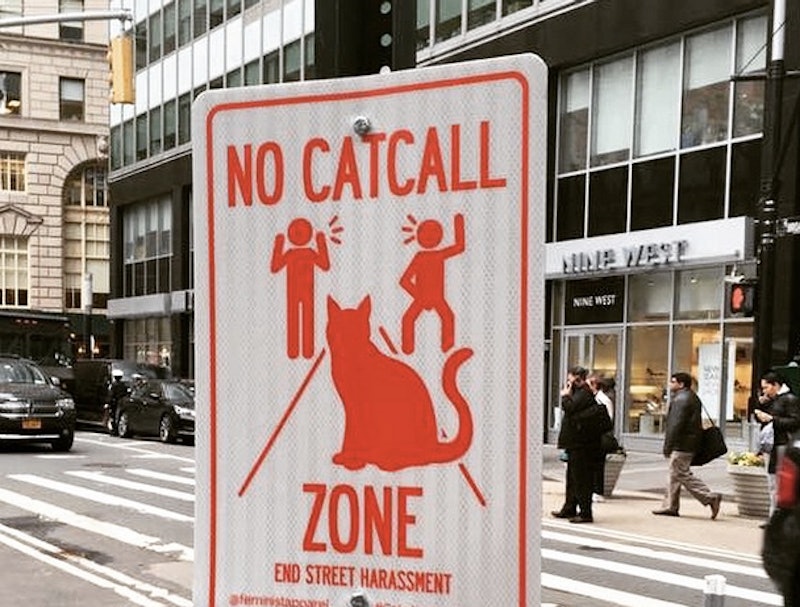 Look out, fellas, the feminists are coming for your free speech. Non-profit Feminist Apparel is putting up “No Catcall Zone” signs in New York City as the latest move in its ongoing attempt to put an end to street harassment. This is all awesome, and needed, and a hilarious jab at dudes who simply do not get it and need visual reminders. But as Gothamist’s Lauren Evans smartly points out, this obviously shouldn’t have to exist.

Unfortunately for all of us, it does, and it’s a small part of the sexist attitudes and behaviors that continue to pervade our culture. You’ll remember the viral video last year of a woman who walked the streets of New York for 10 hours and was subjected to disgusting, invasive forms of harassment both verbal and in some instances, physical (she was stalked in more than one instance in the video). It gave context to much of what women everywhere experience daily, every time we leave our homes.

We reported on Feminist Apparel’s amazing body-positive and anti-harassment t-shirts that they funded primarily through an Indiegogo campaign, which included a video of women talking about their experiences with cat-calling and verbal assault. It’s great to see that their campaign has expanded to raise awareness by way of other in-your-face-until-it-stops measures. I for one would love to see these signs pop up beyond the streets of Manhattan and Brooklyn. (Can we start a campaign for this, or something?) Take a look at the signs from Eddie Going, who snapped one on his Instagram:

Forever and ever, amen.