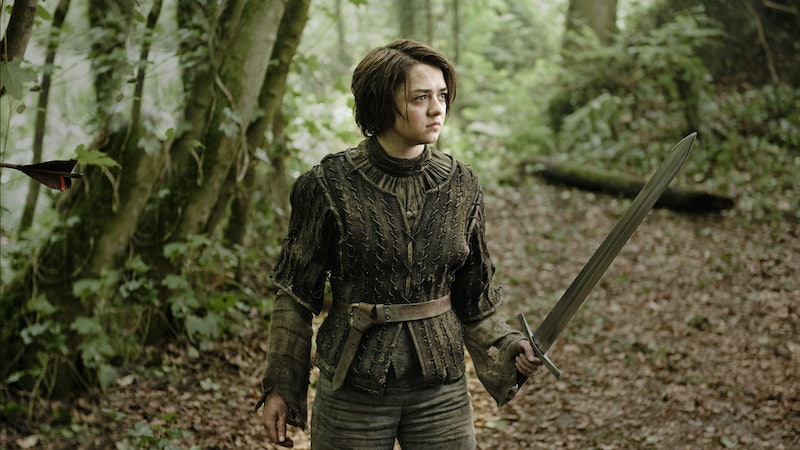 Brace yourselves, a potentially unsettling truth bomb is coming: Now that Game Of Thrones Season 5 has premiered, think it’s time we acknowledge the fact that everyone’s favorite, take no prisoners, pixie haired adolescent is not exactly a child warrior any longer. They grow up so fast! But make no mistakes about it, she's still a freakin' warrior — just like, older, at least spiritually. You see, Game Of Thrones' Arya Stark has had a rougher life than most, but she still manages to seize the day. Unlike the rest of us lazy schleps that have had twice the time to gain her sort of resolve and haven't had half of her hardships.

At this point, the pint-sized warrior is practically our elder, albeit by happenstance. I suppose that even those stuck in a seemingly warped Westeros time frame have to grow up eventually — if not time wise, then maturity wise. There’s no living with your parents when you’re jobless after college in Westeros. Because, uh, they’re isn't college in the Seven Kingdoms… and there aren’t a whole lot of parents left to live with, either.

That being said, I think it'd be prudent to reminisce on all the times the third youngest Stark made us look up to her, despite her age. Because really, no one can hold their own in a ruthless, unforgiving world and spew a Valar Morghulis quip with the same utter conviction as Arya can.

So, in honor of Arya’s unwavering spirit and courageousness, here are the 18 times Arya Stark was legitimately everything you ever wanted to be and more:

When she was an A+ student

Even though she wasn't actually graded or anything.

When she learned how to deliver a subtle yet poignant threat

When she sassed it up

Teenage-hood in Westeros is truly the pits.

What is a life without insults?

When she wasn't afraid to stand up for herself

She wasn't bluffing, either.

When she got poetic about her death threats

An apt use of descriptive language.

When she shot a scarecrow right in the balls

When she gave Jon Snow the love and affection he deserved

You know why his name is Jon Snow? Because everyone is positively FRIGID towards him. So, thank you for having a heart, Arya.

When she made Sansa feel like the little sister

When she Ceser Milan'd her dire wolf

The truest, purest friendship Winterfell has ever seen.

When she impressed The Hound

NOT an easy task.

When she refused to be patronized

Arya will be addressed however she damn well pleases.

When she "got down to business"

But, not to defeat the Huns. Close though.

Where is Michael Scott when you need a proper, "Boom. Roasted," hm?!

When she soldiered on, even though she was terrified

When she solidified that she was Westeros's feminist hero

Aside from Khaleesi, of course.

More like this
Netflix Just Rebooted A Classic ‘90s High School Drama
By Maxine Harrison
The 'PLL: Original Sin' Creators Say A’s Identity Will Be “Very Clear” By The Season Finale
By Alyssa Lapid
'The Sandman’s Ending Is A Departure From Neil Gaiman’s Comic Book Series
By Kadin Burnett
Every Horror Movie Reference In The 'PLL: Original Sin' Premiere
By Alyssa Lapid
Get Even More From Bustle — Sign Up For The Newsletter