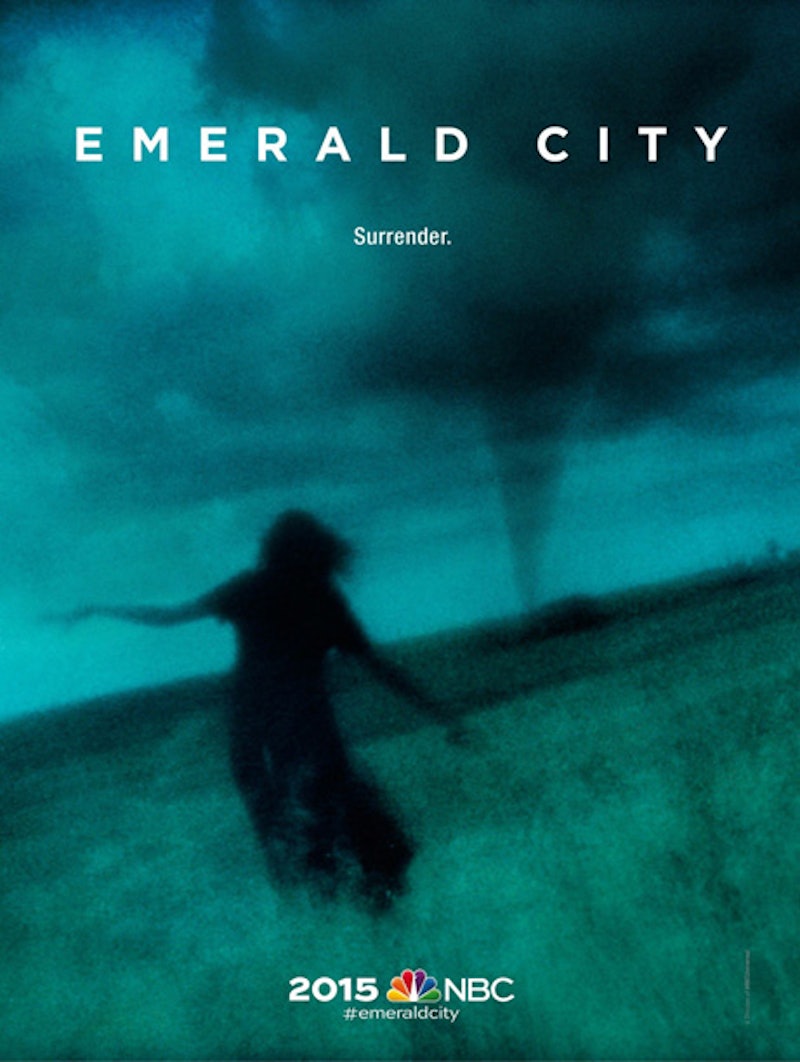 It used to be unthinkable that a television show that had been cancelled would ever return to the air. But now the resurrection of axed programs has become almost commonplace, thanks to rabid fan bases and a plethora of platform options. From Arrested Development to Full House, the Second-Chance Phenomenon (as I've just dubbed it) is in full swing these days. But NBC has just upped the ante by giving a second chance to a show that didn't even have a first one: According to reports, NBC's un-cancelling their Wizard Of Oz -themed miniseries, Emerald City .

First green-lit in Jan. 2014, the show was envisioned as a Game Of Thrones -esque take on L. Frank Baum's classic novel, and was given much hype by the network, even debuting a teaser poster at Comic Con. But then last summer, the project was inexplicably canned before it even began. Now, like the Wicked Witch appearing in a bust of flames, Emerald City has risen from the ashes of its own cancellation. Here's the logline:

In the blink of a tornado’s eye, 20-year-old Dorothy Gale and her K9 police dog are transported to another world, one far removed from our own—a mystical land of competing kingdoms, lethal warriors, dark magic and a bloody battle for supremacy. This is the fabled Land of Oz in a way you’ve never seen before, where wicked witches don’t stay dead for long and a young girl becomes a headstrong warrior who holds the fate of kingdoms in her hands.

If the idea of Dorothy in Westeros doesn't appeal to you, though, fret not — there are FIVE MORE versions of The Wizard Of Oz headed to your television in the near future. Why so many competing networks felt the need to retell such a familiar story all at the same time is a mystery as profound as why Dorothy was so afraid of pigs.

Logline: "A fantasy-action reimagining of the classic story in which a warrior from present day Earth is transported to a post-apocalyptic future Oz where he must team up with three other warriors, Heartless, Brainless, and Coward, in order to defeat the evil Wizard who has enslaved the land."

From Timur Bekmambetov (above), the director of Wanted and Abraham Lincoln: Vampire Hunter, this project would likely boast impressive visuals... but it's a strange take on the classic.

Logline: "A medical soap based in New York City, inspired by the characters and themes immortalized in The Wizard of Oz."

Because what Grey's Anatomy is missing is definitely wicked witches and singing munchkins. I can see it now: Dorothy searches for a heart! And a brain! And a liver! Producers Carl Beverly and Sarah Timberman successfully transplanted Sherlock Holmes from Victorian London to modern-day Manhattan for Elementary, so I suppose that maybe they know what they're doing, but I'll have to see it to believe it.

Dorothy Must Die (The CW)

Logline: "A revisionist take on the classic tale set in present day, 80 years after Dorothy Gale supposedly came home. In reality, the magically-ever-youthful Dorothy has stayed in Oz, presiding over a now fascist fairyland with her perfectly manicured iron fist and the help of her henchmen – the Scarecrow, the Tin Man, and the Cowardly Lion. But when another young woman from Kansas is swept up in a tornado and magically dropped into this war-torn Oz, our hero discovers a revolutionary underground of witches and enchanted beings only to learn that she is destined to lead their people in the fight to reclaim Oz from a power-hungry Dorothy’s ruthless clutches."

At least it doesn't star a man or take place in a hospital. While I'm not so sure about Dorothy-as-fascist-dictator, this one does have some of the trappings of success: a well-known creator (Heroes' Tim Kring), trendy source material (a YA novel by Danielle Paige), and a network that knows what its small but loyal audience likes (soapy sci-fi/fantasy shows starring hunky models). I particularly enjoy how, coming one month after CBS's announcement, the title sounds like a direct challenge to that network's show.

Logline: "In the classic 1939 feature, when Dorothy set off for the Emerald City, she followed the Yellow Brick Road. But among the yellow bricks at Dorothy’s feet, there was also a swirl of red bricks. They’ve been there the whole time in plain sight. Unnoticed. Unexplored. Which raises the question — just where do they go? Red Brick Road will answer that by following Dorothy down that fateful path, taking her to the oldest, darkest and most dangerous parts of Oz to find what became of her friends who all have gone missing."

Somehow, the channel known for its made-for-TV movies somehow came up with the best pitch of the bunch. Where exactly the Red Brick Road leads has been a question asked by Wizard Of Oz audiences for almost 80 years now. Exploring unknown corners of the material's existing universe sounds promising.

Logline: "Opening in 1975, The Wiz ran for four years on Broadway and won seven Tonys, including best musical. It retells the classic story of The Wizard Of Oz in an African-American context."

While it's nice to see NBC acknowledge the recent success of diversity-driven shows (Empire, How To Get Away With Murder, Jane The Virgin, Fresh Off The Boat, black-ish), the fact that Cirque du Soleil is co-producing the network's next live musical event is a dead giveaway that there's gonna be some crrrazy stuff goin' down on my TV screen. Perhaps NBC's commitment to this project is what caused them to renew their interest in their other Baum-inspired program.

While The Wiz is a sure thing, it will be interesting to see how many — and which — of these other projects actually make it all the way to air.