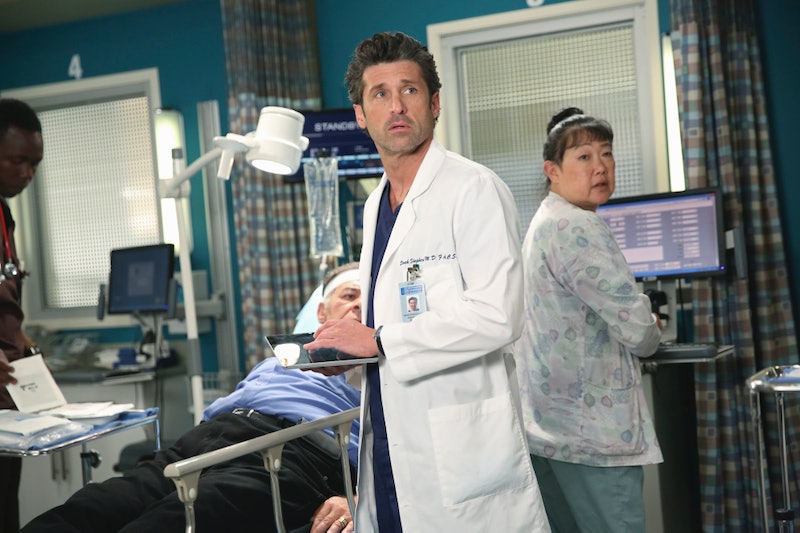 Is this the end of McDreamy? What is going to happen to MerDer? Is Derek leaving Grey's Anatomy ? These are all questions fans have been asking for a long time that were heightened with last week's episode, and now it's time for answers. Patrick Dempsey has actually talked about leaving the show before. In November, he told the Portland Press Herald that Derek Shepherd’s departure would be “very soon.” “Acting [on Grey’s Anatomy] has been a blessing for me and has allowed me to do all this,” he said. “But it’s transitional for me right now. I’m looking forward to the next thing, creatively.” This is a terrifying prospect, because I think the only real way Derek could leave the show would be if he died. But don't panic yet.

Just this past January, Dempsey and Ellen Pompeo renewed their Grey's Anatomy contracts for two more years, according to Entertainment Weekly. Still, I'm convinced that Derek is in mortal danger. What if Dempsey somehow finds a way out of that contract? I know, you all hate me for saying it, but if that were to happen, we know that McDreamy can’t just walk out on Meredith forever because that would ruin the essence of McDreamy. Ergo, I'm convinced that if Dempsey ends up leaving before that contract is up, Derek is going to die. Though the upcoming episode “One Flight Down" focuses on a plane crash, I don't think this is how Derek will go (if he ever does). Shonda Rhimes always saves all of the craziest plot twists for the very last episode of a season, so while Derek Shepherd may be missing all episode, I think that if Season 11 kills off Derek in a shocking twist, it will come during the finale.

Here are some signs that the end may be near for Derek Shepherd, if anything changes with that contract.

Derek's absence from the middle of Season 11 seems particularly sketchy. It's almost like Grey's Anatomy is trying to establish an environment without Derek Shepherd. Maybe it’s a way of softening the blow.

Derek kissing another woman made him seem a bit untrustworthy. Many fans are unsure about where MerDer stands, even though they seemed fine since he returned. Why add that storyline if it wasn’t significant? Another way to soften the blow.

Meredith Is Fine On Her Own

Grey's Anatomy kept pointing out how much better she is at life when Derek's not around. She’s a better doctor and there's so much less drama. Basically, it showed us that Meredith can be really awesome alone and doesn't need Derek like she used to.

There’s No Place For Him At The Hospital

We have a new Shepherd and she’s kind of awesome. Hunt is a great chief. There’s no place for Derek to be the golden boy anymore.

Remember when Amelia told Meredith, “You’ve never lost the love of your life. You’ve never cried over the body of the person you love most in the world.” Um, way to jinx it...

Kind of a major red flag.