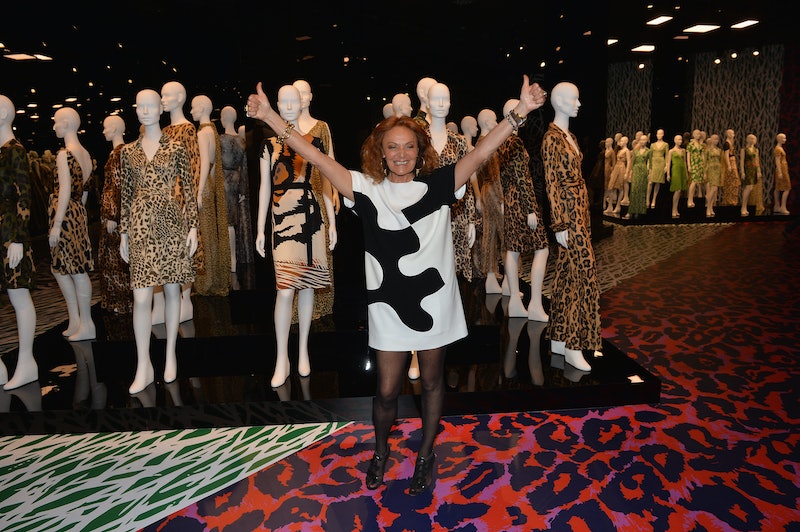 For a young millennial like me, it's hard to believe that there was such a time before the existence of the wrap dress, before the versatile, convertible, workplace appropriate, day-to-night frock was available to the masses. 'Twas a dark time, but it did in fact exist. So, when did Diane von Furstenberg invent the wrap dress, exactly? It year was 1974 when the now-legendary designer came to New York City with a small investment and first rolled out the signature design that made her a fashion icon at the age of 28.

It's been over 40 years since von Furstenberg created the first wrap dress, and it might be hard to see just how revolutionary a dress crafted out of gentle jersey that effortlessly clung to all body types was back in the mid-'70s. But now, with that dress forever immortalized in the Metropolitan Museum of Art and Thursday's announcement that Diane Von Furstenberg is among Time 's 100 Most Influential People of the year, we're looking back at Fursetenberg's groundbreaking design. Just what have we learned from all that famous garment fabric? At 68 years old, the designer has provided us with a lifetime of stylish wisdom, and it all started with one little dress.

Embrace Your Own Beauty

The wrap dress was one of the first "size inclusive" fashion pieces on the market, way back before developments like Nicolette Mason's Mod Cloth collection. The silhoutte works on just about everyone and encourages showing off what your mama gave you.

Truth be told, the wrap dress wasn't a smash hit right off the bat. Furstenberg toted her wears all around town, until she finally received the long-awaited praise her determination and innovation deserved — a handwritten letter from the former editor in chief of Vogue that called her clothes "smashing." Not too shabby for a 28-year-old, which leads to...

The crazy success that the wrap dress gave von Furstenberg in her twenties proves that when you know what you want, you're never too young to go after it. "I wanted to be an independent woman, a woman who is in the driving seat, and who is in charge of her own life," she explained to NPR. "And that clearly means, also, being financially independent. So that's really what I wanted to be and I became that woman. I was lucky that I became that woman very, very early in life, you know, in my late 20s. And that's that."

Recognize the Strength in Femininity

According to Vogue, the first advertisement for the wrap dress was a low-budget affair that simply featured the designer cloaked in one of her iconic frocks against a white backdrop with the words "Feel like a woman, wear a dress!" handwritten by Furstenberg in blue pen. Although there are obviously tons of other ways to be woman that don't involve wearing skirts, the feminine silhouette of the wrap dress encouraged embracing the strength of one's femininity.

"All women are strong," Furstenberg says. "My mother survived Auschwitz, and fear wasn't an option when we were growing up. If we were afraid of the dark, we were put into the closet until we weren't." Today, the designer staunchly works towards cultivating and recognizing the leadership skills of women, with the creation of the DVF awards in 2010. "Women never cease to impress and inspire me," she said of her girl-power mission.

Be Free, Be Sassy

Back in the '80's, when asked why she invented the wrap dress, DVF sassily replied: "Well, if you're trying to slip out without waking a sleeping man, zips are a nightmare." Created right around the second wave of feminism and the reproductive rights movement, the wrap dress embodied female independence.

"The minute I knew I was about to be [a] wife, I decided to have a career. I wanted to be someone of my own, and not just a plain little girl who got married beyond her desserts," she said in 1977. The wrap dress was very much about looking beautiful for oneself and not about male approval, as Furstenberg was always taught that the relationship she has with herself should be her number one priority. "If you have that, any other relationship is a plus and not a must. And that is key to everything!”