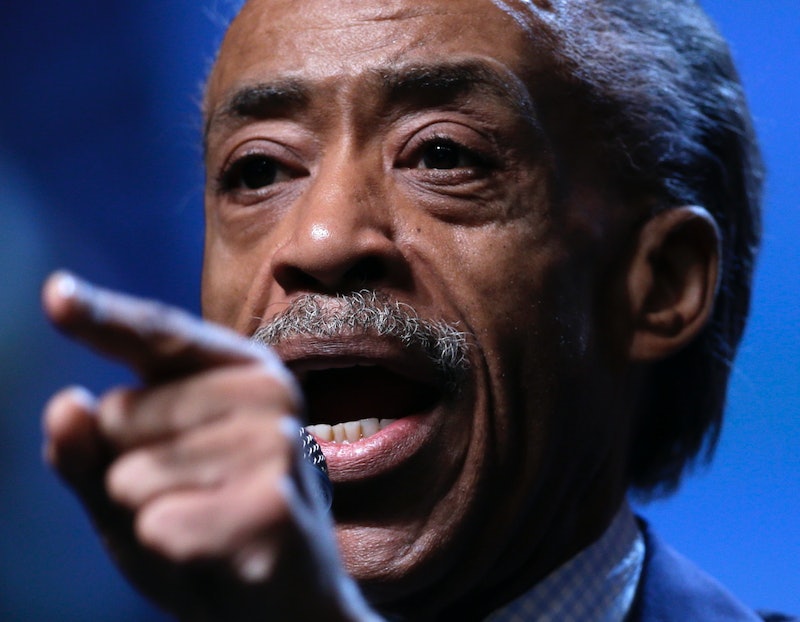 Two days ago, a North Carolina GOP County Chair was forced to step down after he called black people “lazy” during an interview on the Daily Show. Today, an actress donned blackface, and the Rev. Al Sharpton decided to boycott New York's fashion retailer Barneys, after the luxury shop —along with another major department store — faced multiple allegations of racial profiling. What year are we in, again?

Earlier this week, two African American New Yorkers, Trayon Christian and Kayla Phillips, said they were detained by the NYPD after buying expensive products from Barneys. Nineteen-year-old Christian, who is suing the store, claimed he was accused of fraud after he used his debit card to buy a $349 Ferragamo belt. A few days later, 21-year-old Kayla Phillips came out with a similar story: after buying a $2,500 Céline handbag, she was followed out of the shop, when she was attacked — yah, attacked — by four undercover cops.

“As I was walking into the train station, four undercover police officers attacked me,” Phillips said. “They asked me why I used a debit card and why it didn’t have my name on it."

"I felt helpless, confused, demeaned, humiliated and embarrassed," she added.

On Friday, actor Robert Brown revealed a similar experience. The celebrity said he was apparently "paraded" in handcuffs through Macy's department store this summer, and was detained for an hour in a holding cell after an employee refused to believe Brown's credit card was legitimate. The employee reportedly threatened the actor, saying, "Your card is fake. You're going to jail.'"

Macy's responded by issuing a statement saying: “We are investigating the alleged claims, as we were just made aware of this lawsuit. We do not comment on matters in litigation.”

Kirsten John Foy, an official with Sharpton's National Action Network, is set to meet with Barneys officials on Tuesday to discuss the accusations, and Sharpton himself got a personal call from the CEO of Barneys yesterday.

“Barneys New York believes that no customer should have the unacceptable experience described in recent media reports, and we offer our sincere regret and deepest apologies,” the exec said in a public statement.

But the civil rights leader is holding out for more than an apology. "We've gone from stop and frisk to shop and frisk, and we are not going to take it," Sharpton said. "We are not going to live in a town where our money is considered suspect and everyone else's money is respected.""The only theft that took place at Barneys was Barneys' stealing the dignity of these young people," echoed Foy.

The controversy has led to fans of Jay-Z calling on the musician to pull out of a recent clothing and accessories deal he'd made with Barneys — an online petition demanding that he end all partnership with the store as already gained 9,000 signatures.

The NYPD has a fraught history of racial profiling — from 2005 to 2008, roughly 80 percent of stop-and-frisk subjects were blacks and Latinos (who, it should be pointed out, only make up 25 percent and 28 percent of the city's total population, respectively). Also back in 2005, Macy's paid a sum of $600,000 in a settlement after it was similarly accused of targeting Latinos and blacks when suspecting theft.