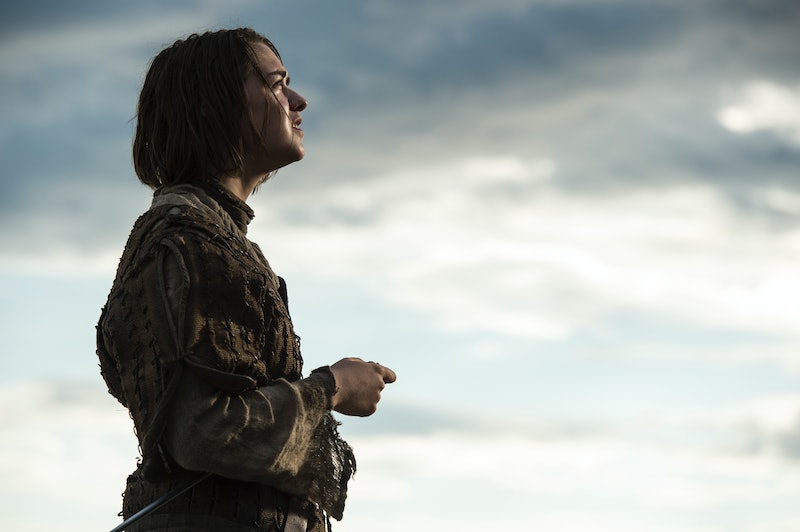 Although some viewers may have disappointed to see plucky little Arya sit out the Season 5 premiere of HBO's Game Of Thrones, those same viewers will be very happy to know that the fiercest Stark is back in full force in this Sunday's episode, titled "The House Of Black And White." Last we saw her, she had ditched a dying Sandor Clegane (who had been badly wounded in a fight against Brienne of Tarth), and hopped a ship bound for Braavos. She paid for her passage with the iron coin given to her by Jaaqen H'ghar back in Season 2 and the Braavosi words, "Valar morghulis" ("All men must die"). Book readers will know that Arya's titular destination, the House of Black and White is the temple of the Faceless Men. But who are the Faceless Men, and what does Arya want with them?

The Faceless Men are an ancient league of assassins legendary for their skill and subtlety. Nobody knows who they are, nobody ever sees them coming, and there's nothing you can do to stop them. Although the assassins are only just now coming into play in a big way, we've heard them referenced often before. As far back as the first book in his Song Of Ice And Fire series, George R.R. Martin has been dropping hints of their eventual importance.

When discussing the plot to have Daenerys Targaryen murdered, Petyr Baelish had this to say to his fellow members of the Small Council:

"If we’d sent a Faceless Man after her, she’d be as good as buried." — A Game Of Thrones, Chapter 33

But as it so happens, hiring the most skilled assassins in the world is an expensive proposition:

"Do you have any idea how costly they are? You could hire an army of common sellswords for half the price, and that’s for a merchant. I don’t dare think what they might ask for a princess." — A Game Of Thrones, Chapter 33

Why exactly are the Faceless Men so good at killing? First of all, they've been assassinating people for a very long time. The group traces its lineage all the way back to the mines of ancient Valyria. Legend has it that the first Faceless Man was a slave who realized that all his fellow slaves, crying out to their disparate gods for relief from their horrible conditions, were really all praying to the same god — which he named the Many-Faced God. This slave decided he was the instrument of the Many-Faced God, and took it upon himself to answer the slaves' prayers.

The Faceless Men continue this tradition of granting release to those begging for death. Anyone seeking to shuffle off their mortal coil may come to the House of Black and White, drink from the pool at its center, and die a painless death. But they have also started shopping their particular skill set to whoever can afford it, training new recruits in the crypts below their temple.

But time and tradition aren't the only things that make the Faceless Men the masters of death. They also get a little bit of help from some good old-fashioned magic. Whenever a person comes to the House of Black and White to die, their corpse is taken to the crypts where their bodies are washed... and their faces are peeled off, cured, and hung on the walls. When an assassin sets out to complete a contract, he (or she) will choose a face from the wall and —through a spell involving their own blood as an adhesive — change their appearance entirely. This allows them to discard their false identity as soon as the assassination is complete, which is why no one knows who they are and why a Faceless Man has never been apprehended.

If this rings a bell, it's because we've met a Faceless Man before. Jaqen H'ghar, the man who gave Arya the iron coin that led her to the House of Black and White, is a member of the order himself. Remember when they were parting ways after escaping from Harrenhall, and Jaqen's face suddenly transformed? Here's how Martin describes that moment:

"My time is done." Jaqen passed a hand down his face from forehead to chin, and where it went he changed. His cheeks grew fuller, his eyes closer; his nose hooked, a scar appeared on his right cheek where no scar had been before. And when he shook his head, his long straight hair, half red and half white, dissolved away to reveal a cap of tight black curls. — A Clash Of Kings, Chapter 47

On the page, Arya never sees Jaqen again after this encounter, but reports suggest that their paths may cross again on Thrones. Some astute fans noticed Jaqen's portrayer, 41-year-old German actor Tom Wlaschiha, listed on a Season 5 cast list early last month. Sounds like Arya will receive her assassin training straight from her old friend.

Then she can get started crossing some of those names off her ever-growing list.