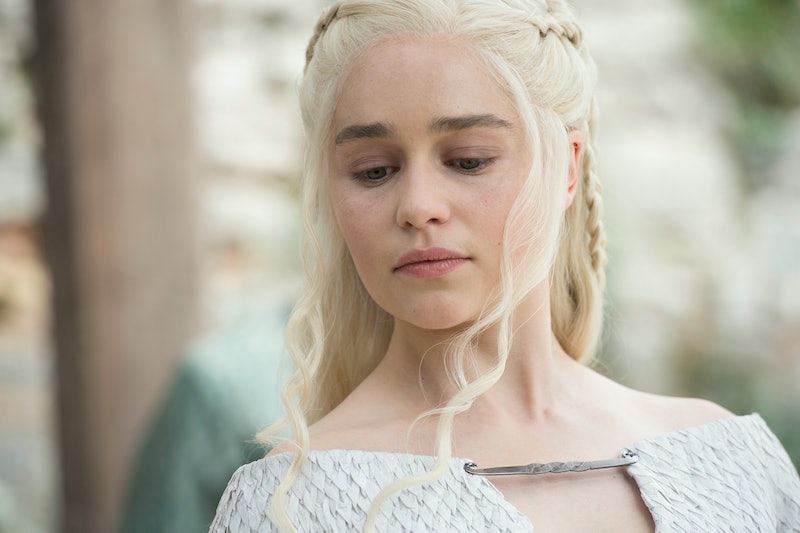 My head is still reeling after the Season 5 premiere of Game of Thrones. Besides the fact that there are about 10 storylines at once, the most important storyline is of course what is happening with Daenerys Targaryen in Meereen. After the first episode we know that there is a Meereen resistance group who call themselves The Sons of The Harpy and they have taken it upon themselves to start killing the unsullied and people who stand by Dany. Well, I am here to tell you that Daenerys is going to defeat these jerks, even if it takes a long time, because she’s a total badass and she has dragons. If you have dragons, you basically win life… and the game of thrones. Obviously.

However The Sons of The Harpy aren’t going down without an annoyingly long fight. I mean does anything in Game of Thrones ever take just one season? The answer is "no." I swear winter has been around the corner for five years now. This battle is going to take to the end of this season, possibly to the end of Season 6 if they are going by books four and five, but apparently people who watched the leaked episodes said Season 5 has some major plot differences from the book. I don't care though, I am still going to tell you what goes down between Dany and The Sons of The Harpy based off my book knowledge.

Remember the name Hizdahr zo Loraq (yes, I too have no idea how to pronounce that aloud). We actually met Hizdahr zo Loraq in the middle of last season and he’s super important to the future (skip to 3:00 below):

So in the book, according to the A Dance With Dragons wiki page (and my stepfather who is more obsessed with Game of Thrones than anyone you’ve ever met), Dany locks up her Dragons (except for the one that’s loose, of course) and she starts to feel pretty powerless. She’s basically losing control of things in Meereen, especially with these guys who are killing people on a daily basis. Hizdahr basically promises Daenerys that if she marries him the killings will stop. Even though she is not into him at all because let’s face it, Daario is way better, she is desperate for people to stop dying. So they marry and the killings stop, leading Dany to believe that he was either the head of The Sons of The Harpy or that he had some kind of connection with them.

To celebrate their wedding they open those fightings pits that he asked her for in the Season 5 premiere and there’s fighting going on and blood of course, which attracts the missing dragon to come back. Naturally, Dany jumps on the dragons back and flies the hell out of there. Badass.

Literally, that’s the end of the book and George R.R. Martin is taking pretty much forever on Book 6.

So in lieu of answers, I've got a wealth of opinions for you, namely that I find it pretty lame that in order to stop the killings she has to marry some stupid guy (way to get medieval on us, dude). But I don’t believe that’s the end of the story. I think that once she realizes she can ride the dragons, she will learn to control them, come back, and kill off Hizdahr zo Loraq and The Sons of The Harpy.

No one messes with Khaleesi.