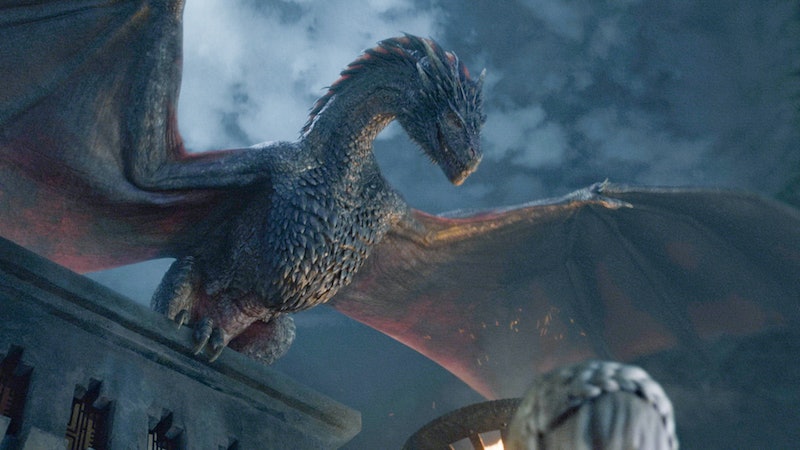 "If you say in the first chapter that there is a dragon egg, then in the second or third chapter it absolutely must hatch. If it's not going to hatch, it shouldn't be sitting there." So says the great Russian playwright Anton Chekhov. (I may be paraphrasing.) When Daenerys' benefactor Illyrio Mopatis presented the young Targaryen with three petrified dragon eggs as a wedding gift in the very first episode of HBO's Game Of Thrones, viewers knew those suckers would hatch by the end of the season. And sure enough, Season 1 ended with the triumphant birth of Dany's three dragons: Drogon, Rhaegal, and Viserion. Now, going into the show's fifth season, the flying lizards have grown from mere hatchlings into teenagers, complete with growing pains and plenty of angst. But just how important will Dany's dragons be in Game of Thrones Season 5?

Although the dragons' screen time has always been somewhat limited by the budget constraints of television, showrunners David Benioff & D.B. Weiss seem determined to finally give the scaly trio their time in the spotlight. "Daenerys' story required some of the show's biggest budget bump," James Hibberd wrote in Entertainment Weekly's recent spread on Thrones, "since there's more dragon action this season than ever before now that her fire-breathing offspring are in their rebellious teenage years. (A joke on set goes: 'What do dragons eat? Money!')"

Unfortunately for Dany, they've also started eating people, which is why Season 4 ended up with the Breaker of Chains chaining two of her dragons in a dungeon. After Drogon devoured Zalla, the young daughter of an innocent goatherd, Dany was forced to accept the fact that her pets had grown out of her control. Although Drogon was out hunting at the time and thus avoided the time-out, she lured Rhaegal and Viserion into the basement of her pyramid and locked them up.

So with two dragons chained up and one on the lam, how exactly is there going to be "more dragon action this season than ever before?" Well, given that the title of one of the books this season is based on is A Dance With Dragons, they should play a key part in the action this year. The biggest question mark surrounds Rhaegal and Viserion, since the character whose journey leads to the two imprisoned dragons has been cut out of the TV show. (Spoilers for non-book readers ahead!)

In ADWD, Quentyn Martell, son of Prince Doran of Dorne (and nephew of dearly departed Oberyn Martell), is sent by his father to fulfill a secret marriage pact made between his family and the Targaryens by wooing and wedding Daenerys. However, by the time he arrives, Dany has already married a local Meereenese merchant named Hizdahr zo Loraq for political purposes, and so Quentyn's advances are rebuffed. Determined to prove himself worthy of the Mother of Dragons, the young Martell heads to the dungeons, thinking to release and tame Rhaegal and Viserion. This folly predictably ends with the heir to Dorne toasted extra-crispy.

But with Quentyn nonexistent on the show, it remains a bit of a mystery how Rhaegal and Viserion will come back into play. Perhaps Benioff & Weiss have come up with a whole new idea for the two confined dragons... or perhaps another character will be taking Quentyn's place. Who else would be tempted to unleash Dany's dragons? Maybe her new husband Hizdahr zo Loraq, trying to claim the beasts for himself? Or perhaps poor Jorah Mormont, in an effort to redeem himself after being banished last season?

However that storyline plays out, Drogon's will likely remain fairly faithful to the books. In A Dance With Dragons, Dany's largest dragon returns to Meereen after she agrees to reopen the city's fabled fighting pits. Attracted by the noise and the scent of blood, Drogon descends on the arena, roasting several bystanders and causing widespread panic before Dany hops on his back and flies away.

So how did the Game Of Thrones team conjure this fearsome dragon on a television show's limited budget? Remember, confinement stunts a dragon's development, but in the wild they will never stop growing, so Drogon is "about 40 feet long and 20 percent bigger than the other two dragons," according to visual effects supervisor Joe Bauer in an interview with IGN. He went on to explain how they simulated the huge, flying animal while filming:

To create a towering beast, the team used a Technodolly, a fifteen-foot tall crane used to capture faraway shots with a camera. Rather than a camera, they put a flamethrower capable of shooting flames for up to fifty feet. Then, they programmed all of Drogon's movements into the Technodolly, making it move in the same manner as Drogon. Once these movements were captured, Drogon was placed over the crane, his details sketched out by artists.

In order to reduce the use of green screen and stand-in items, the team also began using a SimulCam system that kept an image of Drogon on the monitor so shots could be framed correctly and actress Emilia Clarke had an easier time interacting with the beast.

Watching a 40-foot-long dragon swoop down on a large crowd shooting flames 50 feet long will likely be an image unrivaled in the history of television. And while this particular scene at the fighting pit will likely be one of the climaxes of the season, fans may not have to wait that long to see Drogon for the first time. At the end of their interview with Bauer, IGN implied that a dragon sighting might be close on the horizon: "See Drogon in action this weekend during Game of Thrones: Season Five's premiere on HBO."

If you're a goatherd, I have only one piece of advice for you: Hide your kids.