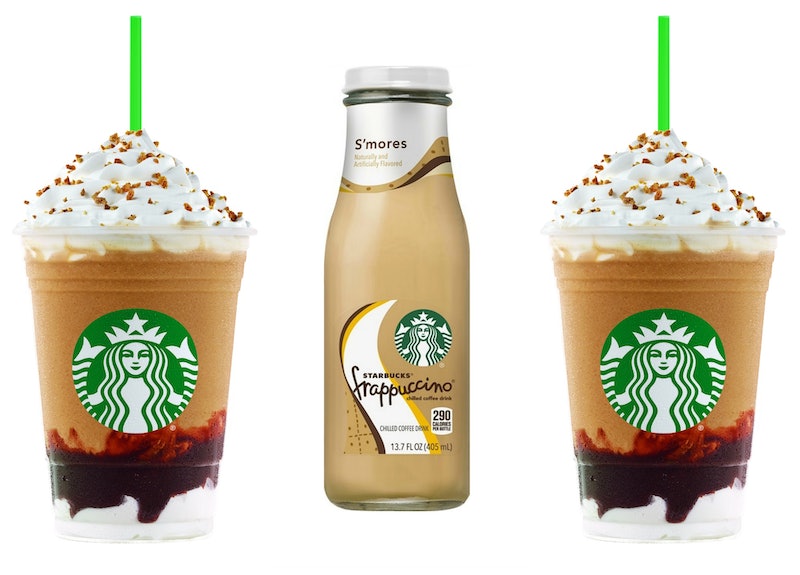 As was the case with last month's Birthday Cake Frappuccino, Starbucks' latest offering has prompted a swirl of questions — one of which, of course, is this one: Is the Starbucks S'mores Frappuccino caffeinated? Since finding out the answers to these sorts of deeply important questions is what I do, I did a little digging to figure it out. Luckily, I didn't have to jump through half as many hoops to get to the bottom of this one as I did to determine whether the Birthday Cake Frap was high test or not: The S'mores Frappuccino does, in fact, contain caffeine. Here's the deal.

The official description of the S'mores Frappuccino, which Bustle received via email from a Starbucks spokesperson, reads as follows (emphasis mine):

Inspired by the nostalgic summer experience of roasting S'mores, this layered Frappuccino starts with marshmallow-infused whipped cream and milk chocolate sauce; adds a creamy blend of graham, coffee, milk, and ice; and is finished off with more mashmallowy whipped cream and a graham cracker crumble.

Unlike the Birthday Cake Frappuccino's description, which was frustratingly vague, this one puts it all in no uncertain terms. It's coffee-based; ergo, it's caffeinated, since that's the default at Starbucks unless you request otherwise. QED.

But hey, guess what? Frappuccinos are totally customizable (that's how we're able to take advantage of all those wacky Starbucks Secret Menu recipes). As a post on Starbucks' official blog notes, you can choose your milk, lighten it up by holding the whipped cream or ordering one of the “Light” varieties (available for Caffe Vanilla, Caramel Flan, Caramel, Cinnamon Dolce, Coffee, Mocha, Java Chip, Toffee Mocha, and Tiramisu Fraps, according to the 'Bux's onlin menu), garnishing it with a drizzle, and/or picking your coffee — “Decaf perhaps?”, suggests the post. So, even though it's caffeinated, you can still get your S'mores on by requesting decaf when you order it.

Oh, and hey, if coffee isn't your thing, don't forget that any Frappuccinos that use the Vanilla Bean Creme flavor as a base are decaf — like, for example, the Starbucks Secret Menu version of the Birthday Cake Frap. Aren't menu hacks great?