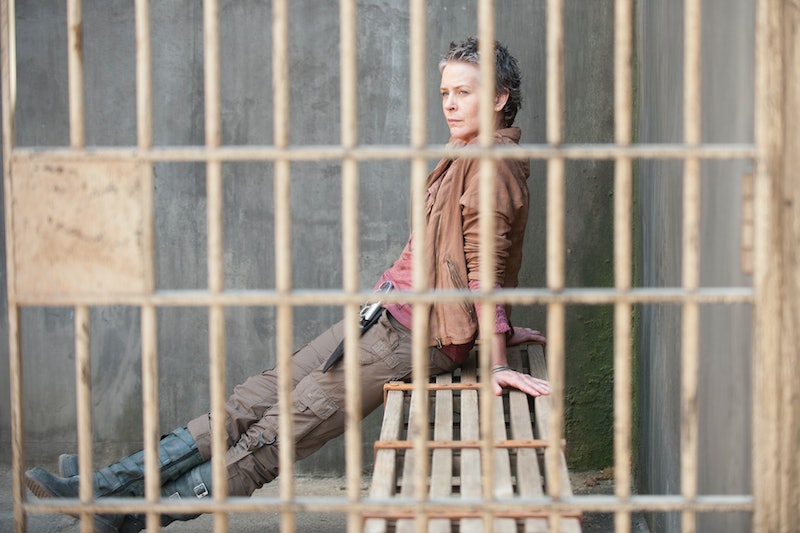 Holy gore! This week on The Walking Dead, there was a pretty good zombie slashing scene, which took place when Daryl, Michonne, Tyreese, and Bob ran into an ocean of zombies while driving to get medicine for the growing number of sick people at the prison. Daryl got distracted by a voice on the radio (um, what?), swerved around, and hit a zombie. Then another. And another. Before long, the group seemed to be trapped in the car, but (of course!) they managed to make it out alive. Even though there aren’t too many close calls to get your adrenaline pumping, it was still a cool scene to kick up Season 4.Aside from the zombie carnage, there were also a few standout characters in the episode whose development may make for some interesting plot twists in the future:

Tyreese and Rick came to blows at the top of the episode. Daryl managed to break up the fistfight, but not before Tyreese got a nice-looking black eye. Rick must have really decked him hard — his eye was swollen shut for the rest of the episode. (Ouch!) Tyreese’s sister, Sasha, was quarantined after showing signs of sickness. This seemed to make him start to question everything happening, because, later, he had an odd existential moment in the car. He nearly gave himself up to be eaten by the zombie sea, yet, in the last second, he smashed through the hoard in a fit of rage. How he made it out alive is beyond me, but, hey, suspended disbelief and all that, right?

After Rick decided to take up the task of solving the mystery of the burned bodies from last week, all clues lead to Carol. (Carol!) She admitted to the murders without hesitation. Since Tyreese is still alive, the threat of his retaliation is a scary possibility. Still, even after killing the sick, Carol continued to be the loving and compassionate mother-figure that she's been even before Sophia became zombie meat in Season 2. So what can we expect from her now? (Unrelated: Is there still the chance that a Carol/Daryl relationship might happen?!)

As the episode progressed, everyone seemed to be getting sick. What are we going to do, guys? Characters we actually know and love are getting sick! Glenn and Sasha are among the “infected” group who have been shoved into quarantine, and, from the looks of it, the group at the prison is about to get a lot smaller very soon. So Herschel, old and wise as ever, decided to risk his own life for the sake of curing the sick. The veterinarian-turned-zombie hoarder-turned-physician made elderberry tea, a flu remedy, to distribute to the sick. As Beth reminded us throughout the episode, Herschel lives by the philosophy, “We all got jobs to do,” and his job is using what he knows to help cure the sick, regardless of the fact that he could get himself sick in the process. While in quarantine, Dr. S coughed, spraying Herschel in the face with blood. So, can we assume that Herschel is a goner? Or will the party headed out for medicine make it back in time to save the show’s major players? It will be interesting to see where Herschel's headed... so long as he's never headed back to that barn.