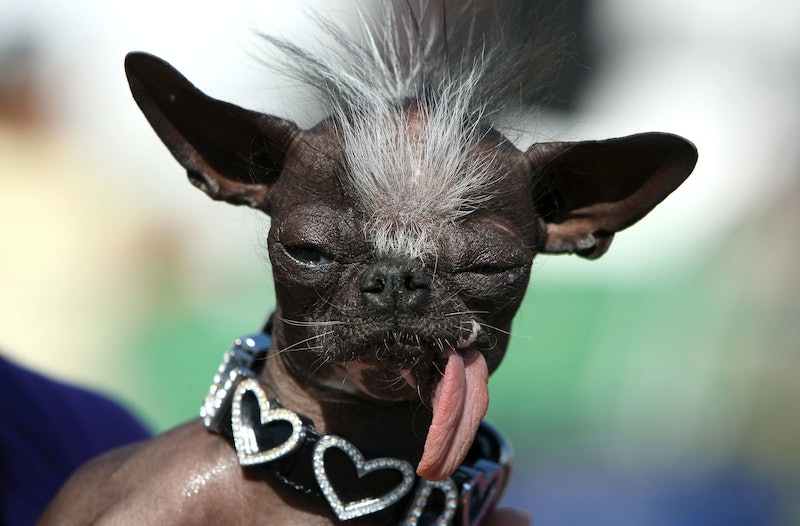 So, you want to get a dog. Mazel tov! This is an excellent idea! Dogs are adorable! Who doesn't love those sweet, enthusiastic, fluffy bundles of pure, unconditional love? Commies, that's who! And you're no commie! So now I imagine you're thinking to yourself, "What kind of dog should I get?" A dachshund? A German shepherd? A dalmation, perhaps? Before you go calling a breeder, I'd urge you to take a gander at the latest episode of the fantastic College Humor web series Adam Ruins Everything. TL;DR: Purebred dogs are the worst and you should get a mutt instead.

The truth of the matter is that I never much saw the point of purebred dogs. (And I'll admit it: I have a soft spot for mutts. My beloved childhood dogs, Toko and Spunky, were both mutts. RIP, puppies!) I mean, are Great Danes awesome? They are super awesome. Do I dream of rolling around in a small puddle of poodles? Every damn night. If you gave me a bichon frise, would I keep it and love it forever and name it Pamplemousse? I would. But can you tell me honestly that dogs with greater genetic diversity aren't just as cute? Dare I say... cuter? Imagine all the cutest parts of your favorite breeds in one incredible uberdog! With mutts that's possible! Let's take a look at some other reasons to go mutt or go home.

Here are some things you probably didn't know about purebred dogs:

Dog breeds are made up by humans

Any dog in its natural state is a mutt. Breeds are arbitrary distinctions established by people (more on that in a minute). It's not like we once had purebred poodles, collies, and greyhounds roaming about and mutts were the unfortunate side effect of them mixing together by accident. The purebreds are a result of selective breeding.

90% of all dog breeds are less than 100 years old (the remaining 10% mostly working breeds). Before the Victorian era, dogs were bred for "type" (work, sport, or companionship) rather than breed. But once aristocrats got competitive about breeding "the perfect" dog, completely random standards were established...with often unfortunate results.

Kennel Clubs do not allow dogs to mate outside of their breed. The result is super-concentrated bloodlines (not infrequently the result of mating parents to offspring and siblings to each other) that are more apt to get you that adorable upturned nose you're after, along with a host of genetic diseases. A study from Imperial College, London found that 10,000 pugs in the UK had a level of genetic diversity you would expect to see in 50 individuals.

The bulldog is the king of poorly bred dogs

Poor, poor bulldog. Hip dysplasia plagues the breed, but that's the least of their problems.They have a lot of difficulty breathing through their super squished in noses, their short tails can become ingrown, their heads are so large they can only give birth via c-section, and their average life expectancy is only 6 years. I have had pants last longer than that.

Breeding creates less healthy dogs that are only getting sicker

The bulldog is perhaps emblematic of poor breeding practices, but they're not alone. Facts according to this video: 60% of golden retrievers die of cancer, 1/3 of King Charles spaniels have heads too small for their brains, and Great Danes' hearts can't support their massive bodies. By breeding to completely arbitrary and totally unnatural standards, we are ultimately making dogs sicker and sicker. No one wants sick dogs. The best way to combat that is to stick to mutts as nature intended. Bonus points: they're almost always far less expensive than a fancy-pants purebred dog, and are available at your local shelter.