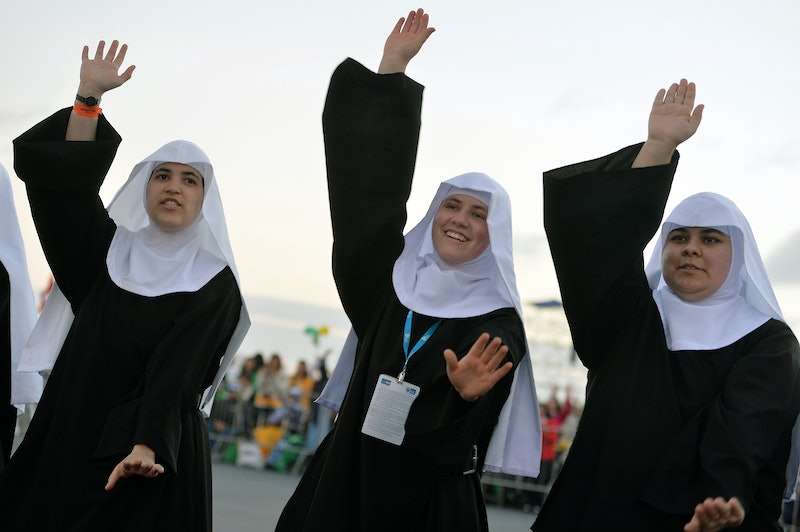 The Catholic Church has never been a monolith, and nuns have historically been one if its more radically-inclined branches. But fortunately, the Vatican has now made peace with American nuns, calling off their investigation two years early. So apparently they are no longer trying to root out feminism in the ranks. Hooray!

This saga begins in 2008 under the former pope, Benedict XVI, when the Congregation for Institutes of Consecrated Life and Societies of Apostolic Life (which is a very long, fancy name for the Vatican office responsible for overseeing religious orders) began investigating the Conference of Women Religious (CWR), which represents most of the 50,000 Catholic nuns in the United States. This was a response to allegations that “a certain secularist mentality that has spread among these religious families, perhaps even a certain ‘feminist spirit.’” The Vatican’s Congregation for the Doctrine of the Faith also began their own investigation.

In 2012, the Vatican began a crackdown on the CWR, citing several issues, including conferences they deemed to feature “a prevalence of certain radical feminist themes incompatible with the Catholic faith.” Several bishops were appointed to oversee the CWR, and given full control over the organization, and many feared that the end goal was to overhaul the leadership of the CWR entirely. The nuns in question strongly opposed all of this, calling the investigations unnecessary.

And now it seems they have been vindicated!

The move isn't necessarily a surprise. Pope Francis has been much more, shall we say, chill than his predecessor, and much more focused on the Church's mission to serve the poor and lowly rather than on maintaining doctrinal purity. And given that nuns have historically been rather proactive when it comes to tending the sick, educating children, and generally doing good things for the community, it makes sense he'd be inclined to let them go about their business, even if they might be affected by the dreaded "feminist spirit."

Because there's also the fact that nuns have historically been pretty badass. They haven't just sat by and meekly tended children and nursed the sick and fed the poor — they've also advocated on behalf of the people they try to help. Nuns have participated in momentous social movements, like the Civil Rights Movement. Some even openly support abortion rights. There are tons of badass nuns around today, like this one, or these ones, or these. In fact, some of the issues behind the most recent investigation were perceived stances on things like the all-male priesthood, birth control, sexuality, and the centrality of Jesus to the faith that differed from the official Catholic teachings. Can you say badass?

And now it seems the sisters will be able to continue going about their work in peace. So, three cheers for nuns!