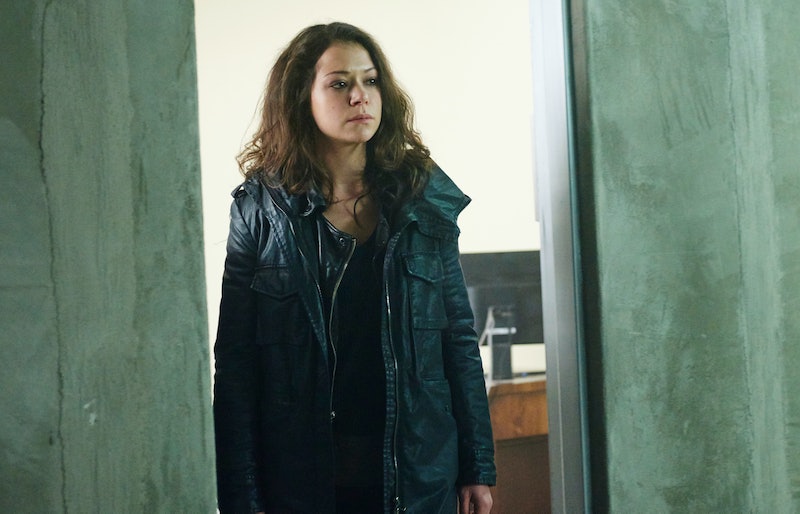 It's not an Orphan Black episode without one clone trying to kill another clone, right? The beginning of Orphan Black Season 3 brings us that same scenario once again, with Rachel and the rest of Dyad/Topside deciding that it's time to eliminate Sarah, Allison, and Cosima. Not like that's a new concept for the show, but a crazy new concept is in fact introduced: Helsinki. It's whispered back and forth like a big secret, and it turns out that Helsinki means kill the clones. Worst part about this is that Helsinki has actually been done before.

Throughout the entire episode, everyone keeps whispering about Helsinki. Delphine (back from Germany and now in charge of Dyad, and Rachel's vacated position — because Rachel got a pencil in her eye, remember?) and Dr. Nealon have a hushed discussion about it in the hallway. Rachel, still in the hospital, mumbles about it in her half unconscious state. The newly introduced Topside "cleaner," Ferdinand, talks about it, too. It's all rather shady, and no one gives up much information about it, as if no one wants to admit they know about it. After a while, it kinda sounds like Fight Club. Like, the first rule of Helsinki is you don't talk about Helsinki.

There's a reason they're not talking about it. That's because it's only to be used in dire situations, like when the clones can't be contained anymore. Rachel (before she got a pencil to the eye) ordered it to be done following the extraction of Sarah's ovary. Helsinki means that Sarah, Allison (along with her whole family), and Cosima will all be killed. The clones are too much to deal with, and Topside is worried they'll be exposed.

Don't freak out, though, it doesn't happen. After Allison Poses as Sarah, and Sarah poses as Rachel, and Sarah-as-Rachel tries to kill Ferdinand, Helsinki is aborted. Crisis averted. For now.

There's one lingering thing about Helsinki, though. It's already been done before. Helsinki isn't just a fun name to say. It's the name of a city in Finland, and it sounds like some clone sh*t went down there.

Here's the bigger Helsinki picture: Delphine mentions that there was an "incident" back in 2006, and that Dyad — Topside included — is trying their best not to have it repeated again. That's suspicious enough as it is, but then Ferdinand adds another piece to this puzzle. He tells Rachel (who's really Sarah) that this Helsinki incident back in 2006 wiped out 6 clones — Ferdinand calls them the "Helsinki girls" — and 32 collateral casualties. Say WHAT? Real talk, did Orphan Black just casually introduce even more clones?

Now the tough question: what clones were taken out in 2006? Were they in the same family of clones as Sarah, or are we dealing with a whole new group of clones now? Why were they eliminated in the first place? So many questions need answers, so good thing we're only on episode one right now. Hopefully this whole Helsinki mystery unravels by the end of the season, or we're going to end up falling deeper into this Orphan Black rabbit hole.

More like this
'Black Mirror' Season 6 Is Reportedly In The Works, Here’s What To Expect
By Maxine Harrison
Eleven Turns To An Unlikely Source To Regain Her Powers In Stranger Things 4
By Brad Witter
Why That Kate Bush Song Is Perfectly Suited For Max In 'Stranger Things'
By Gretchen Smail
Jennifer Aniston Joked About Ending 'Friends' With Therapy & Divorce
By Grace Wehniainen
Get Even More From Bustle — Sign Up For The Newsletter