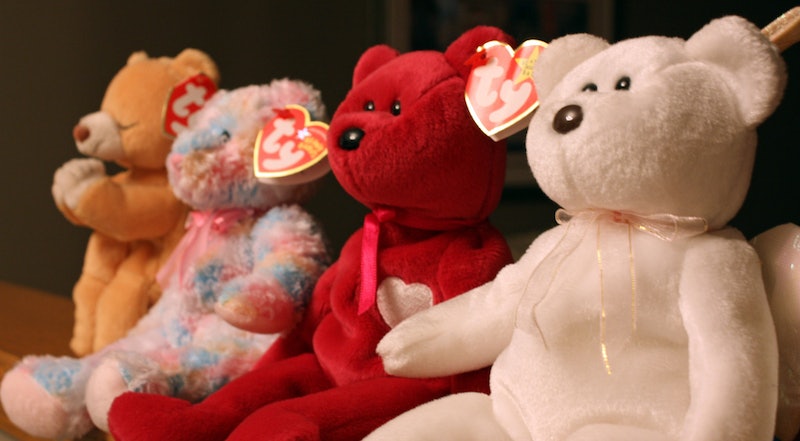 One man's trash is another man's treasure, and stories of people stumbling on cast-off objects of value are always fun. Unfortunately, these stories are also often too good to be true, and that might be the case this time. An English couple is selling their used Beanie Baby for about $30,000 (via Daily Mail), and they're hoping to use the proceeds to fund the down payment on a home. But, given the way that other allegedly collectible Beanie Babies have been selling (or not), they may be in for some disappointment.

It all started when Leah Rogers and Ryan Flanaghan, both in their early 20s, were selling items at a "car boot sale" in Cornwall, England recently (that's a trunk sale, for those of us who are better acquainted with American English). The couple noticed the Beanie Baby in question, a deep purple bear, at another vendor's stall, and snapped it up for about $15. Sure enough, the Beanie Baby turned out to be a limited-edition Princess Di commemorative bear.

Although Daily Mail claims that only 100 items of this bear were ever made, the true production numbers remain questioned by more serious and dedicated sources of Beanie Baby knowledge. Nonetheless, the English couple listed their bear for about $30,000 on eBay around the time of the Daily Mail story.

They believe the bear is worth to be around $90,000. Someone else is listing a similar Princess Di commemorative plus for a whopping $300,000, but that one is unlikely to sell for the asking price.

eBay listings that suggest Beanies Babies are valuable aren't a new phenomenon, because these toys continue to capture people's imagination and hopes long after the Beanie Baby bubble burst. But most of the listings are much more wishful thinking than reasonable economic transaction, and if you look for sales that are likely to actually close with a buyer, then the Beanie Baby market looks much more, well, sane. I came to a similar conclusion in the case of American Girl dolls, too. Some sources claimed that discontinued American Girl dolls are worth insane amounts of money, but in reality there was little indication that real buyers ever paid more than the dolls' original inflation-adjusted value (or less).

Although great Beanie Baby expectations seem focused on the Princess Di bears, don't get taken in by a $450,000 "Hoot" owl, or these $95,000 Valentino, Signature, and Millenium bears, either. In a market where people make money by re-selling things, endlessly increasing value depends on an infinite chain of people who want to pay more — but someone is eventually stuck holding the hot potato. I hope that English couple has some more creative house financing options up their sleeve!

More like this
5 Striking Parallels Between Princess Diana & Prince Harry’s TV Interviews
By Catharina Cheung
These Artists Are Reimagining Black History Month To Create A Better Future
By Katie Mitchell
19 Instagram Captions For Celebrating Black History Month
By Ayana Lage
8 Things You Can Do To Appreciate Lunar New Year
By Elizabeth Tsung
Get Even More From Bustle — Sign Up For The Newsletter
From hair trends to relationship advice, our daily newsletter has everything you need to sound like a person who’s on TikTok, even if you aren’t.