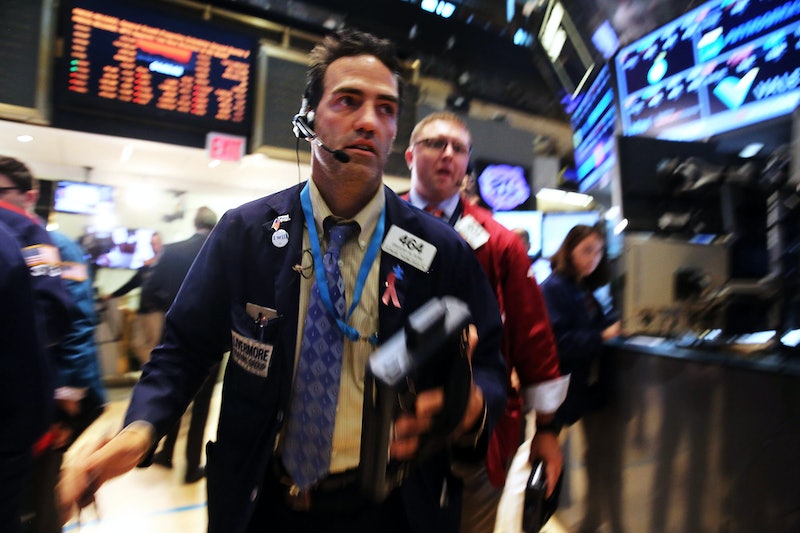 Halfway through this week, stock markets the world over started dramatically free-falling. Though Wall Street types can breathe easier today—the markets re-aligned themselves overnight—we're still not exactly sure what prompted the brief crash. Reports suggest that stocks responded too quickly to Wednesday's announcement that the Federal Reserve might purchase less bonds, and up rates. But a recent editorial in Forbes has its own theory: the markets are volatile because of this generation's up-and-coming female traders. Because, sex.

Let's backtrack a second. On Wednesday, the UK's Commission on Banking Standards brought attention to the elephant-penis in the room by stating bluntly: "The culture on the trading floor is overwhelmingly male." The Commission then had the nerve to suggest that financial companies work to resolve the imbalance, and maybe even appoint a couple more female directors. That's when Tim Worstall of Forbes took offense:

"Underneath all the modern day sophistication we are really still a plains ape (as Brad Delong continually points out) and much of our human interaction is really status games which aid in getting a leg over.... Male risk taking is one of these things: showing off for the girls if you like. Although I’m sure there’s a more politically correct way of putting that these days. Thus men will take more risks in the presence of women."

If you're an old white guy starting a sentence with "I'm sure there's a more politically correct way of putting that these days" you probably shouldn't go on. Of course, Worstall prefers to keep digging his hole:

"Banking began to become more risky in the 1980s. That’s also about the time that women started to be anything other than merely secretaries in that banking environment."

You know what else happened in the 1980s to spur recession, inflation, and stock-market crashing? A really shitty monetary policy established by the Federal Reserve. Who were, at the time, men. Worstall isn't sure how to blame their secretaries, so he just concludes:

" At which point the answer is obvious. Rather than encouraging more women into this world we need to ban them from it. Or alternatively, ban men from it. Either way, that’s the only method of reducing the increased risk taking brought on by mixed gender environments."

Right, because the latter suggestion would so happen. Worstall conceeds that "same-sex trading floors" (separate but equal?) could also be a thing, but he's still playing pretty fast and loose with the word "obvious." He also doesn't know how to correctly use commas. Or logic.

Perhaps what's most shocking here is not that some old financial hawk is sexist, but that Forbes gave him close to 1000 words to spew dinosaur, offensive ideas. Let's just repeat: "Rather than encouraging more women into this world we need to ban them from it." Really, Forbes? Would you have printed this if he argued for racially-segregated, or even age-segregated floors? Your editorial judgement just lost a whole lot of credibility.

More like this
MOBO Awards Found Kanya King On The Woman Whose Grit & Determination Spur Her On
By Kanya King
Amanda Gorman Shared A Powerful Message On Meghan Markle’s Penultimate Podcast
By Darshita Goyal
The David Beckham Qatar Controversy, Explained
By Sophie McEvoy
What Is Julia Haart’s Net Worth? The My Unorthodox Life Star Is A Shoe Mogul
By Radhika Menon
Get Even More From Bustle — Sign Up For The Newsletter