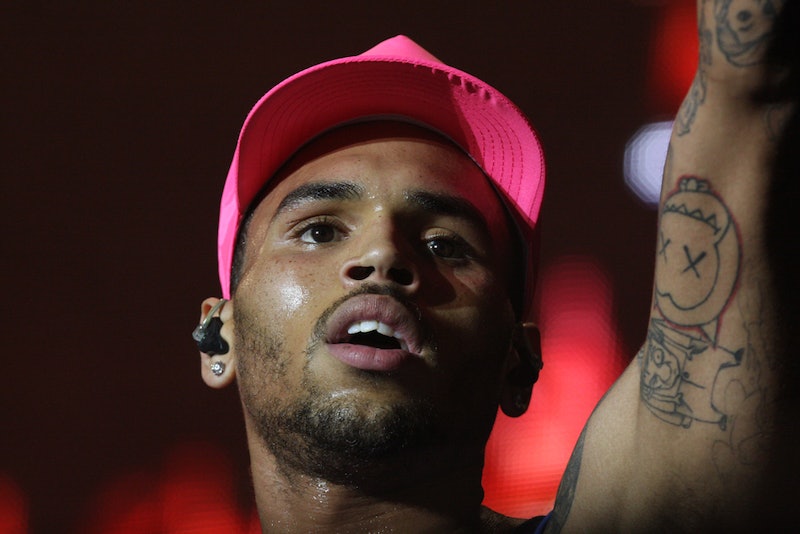 Chris Brown was arrested on Sunday in Washington, D.C., along with his bodyguard, for assaulting a man outside the W Hotel. Chris Brown allegedly punched the victim in the face. No one is surprised, given Brown's history of violence. In fact, this incident seems to somehow delight those who relish hating Chris Brown. He's a trending topic on Twitter, and you can see the kind of rage being spewed in his direction.

The conversation surrounding Chris Brown is always charged. "I hate him," people will say, twisting their faces in rage and spitting on the ground. And it's great that society recognizes that a man who so violently abused a woman shouldn't be allowed to continue his career, let alone be awarded a Grammy, but there is often an absent element in the heated hatred of Chris Brown — the discussion of race.

White celebrities are not innocent of domestic violence, far from it. Most often Brown is compared to Charlie Sheen, whose rap list of violence is astounding: in 2009, the same year that Brown was arrested for his brutal attack on Rihanna, Charlie Sheen pled guilty (and subsequently avoided arrest — he was sentenced instead to rehab and probation) to attacking his ex-wife Brooke Mueller, who later reported that Sheen threatened her with a knife. The atrocities of Sheen's abuse of women are numerous, perhaps most shocking when he shot his fiancee Kelly Preston in 1994 with a revolver. A REVOLVER.

Yet Charlie Sheen is not so publicly berated as Chris Brown (deservedly) is. Since his erratic and public breakdown, he has been the roasted at a Comedy Central roast, the face of Fiat ads, and the star of a show on FX grossly titled Anger Management. Somehow, the media and the public's perception of Sheen is not "abuser" but "eccentric," and his committed atrocities have been diluted as "eccentricities."

Other white celebrities have been the perpetrators of violent abuse, yet these acts are also somehow forgiven or forgotten. Sean Penn notoriously beat Madonna with a baseball bat, Bill Murray physically abused his ex-wife who noted she was "lucky he didn't kill her," and Sean Connery literally told Barbara Walters that it was okay to slap a woman around every once in a while, you know, if you've tried everything else. Those crazy celebrities and their quirks!

But domestic abuse is not a quirk. It's a disgusting offense that should be persecuted in kind, and yet often in cases of domestic violence there is an insidious element of victim-blaming. Rihanna has taken some of the "blame" for being the victim of Chris Brown's violence, because she later got back together with him, which means she somehow retroactively deserved it.

It could be argued that Chris Brown is more publicly condemned for his abuses because he is a repeat offender, or because there was such a visceral element in his case — the photo of Rihanna's mangled face is now, unfortunately, part of our cultural lexicon. But to ask if Chris Brown is constantly berated because he is black does not ABSOLVE him of the crime. Asking the question, "Are white domestic abusers perceived differently than black domestic abusers?" does not imply that Chris Brown shouldn't be culpable for his heinous act. Asking the question is not inherently racist. It's a question that should be raised.

Ayesha A. Siddiqi captured the discrepancy perfectly in a post for Vice :

Chris Brown as a more culturally resonant villain than Michael Fassbender, Sean Penn, Bill Murray, Sean Connery, or Charlie Sheen exemplifies the enduring limitations of white America’s imagination toward black men, even one with a history of witnessing domestic violence as a child... Certain narratives have cultural salience and others don’t, and the distinguishing condition happens to be race.

I, too, despise Chris Brown, but I am also uncomfortable with the treatment of his abuse. He is so notoriously hated, but this hatred seems self-satisfying; if you hate Chris Brown, it automatically renders you a warrior in the fight against domestic abuse. Yet when the conversation turns to the likes of Bill Murray, Sean Connery and John Lennon, somehow these white men are divorced from their actual acts of violence — their cultural mythology eclipses their offenses. Their bodies of work somehow make up for the fact that they, too, abused and beat women. And, admittedly, we've been guilty of forgetting the past too: We extolled the virtues of Michael Fassbender, a man who has been accused of domestic abuse, the same weekend we reported Brown's arrest.

I think there is a hesitancy and wariness to discuss the Chris Brown case through the lens of race, because there is a tendency to view the argument as strictly one-sided: if you say that Chris Brown is hated more for violence because he is black, you don't condemn him for the act. But it has to be recognized that race is an issue here in the perception of Chris Brown. Costa Avgoustinos highlighted this complexity at Racialicious:

Several commentators have pointed out a divide between how White mainstream media and Black media have approached the Chris Brown incident. White, mainstream media, from Jezebel to Good Morning America, has been pretty much anti-Brown since all of this happened. Black media, from NewsOne to Bossip, has been more reserved and seems more willing to forgive and move on. I would wager that this is in part due to Black media being uncomfortable participating in the perpetuation of the ‘violent Black man’ cliché, and the witchhunt that often ensues by the mainstream media with a bit too much eagerness.

It's easier to swallow the fact that a black man is violent — this supports institutionalized and othering cliches — but to admit that actors and legends like John Lennon, too, are capable and guilty of violent acts is more uncomfortable for the largely white entertainment world. If we hold one man accountable, we have to hold them all accountable. Picking and choosing who must answer for their domestic violence makes us complicit in the act.

More like this
25 Inspiring Quotes From Black Women To Celebrate Black History Month
By Kyli Rodriguez-Cayro and JR Thorpe
8 Charities To Donate To During Black History Month
By Alexis Morillo
24 History-Making Black Women You Probably Didn't Learn About In School
By Ayana Lage and JR Thorpe
Austin Butler Recalls Lisa Marie Presley Showing Him Elvis’ Bedroom
By Jake Viswanath
Get Even More From Bustle — Sign Up For The Newsletter
From hair trends to relationship advice, our daily newsletter has everything you need to sound like a person who’s on TikTok, even if you aren’t.