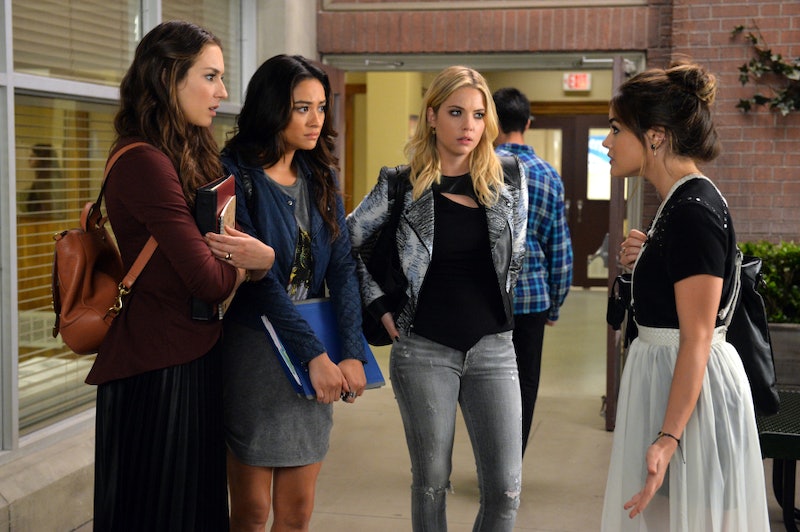 The reveal of Charles DiLaurentis as A has set the Pretty Little Liars world on fire, to say the least. All of the anagrams and clues and speculating and suffering finally paid off! They all mean something! We almost did it, you guys! But what will happen in Season 6 of Pretty Little Liars ? Viewers have two more seasons of Pretty Little Liars to get through before we collectively reach the endgame, and boy, I am lapping up any clues possible to find out more about Charles, CeCe, and any of the unanswered mysteries on the show so far. Luckily, I. Marlene King has released Pretty Little Liars Season 6 episode titles for our speculative pleasure.

For those of you living under a rock in the Season 5 finale, Pretty Little Liars implied that Big A/Charles is most the brother of Ali and Jason, and he may be Jason’s twin. His parentage is questionable, but this would make him about seven years older than the liars and creepy as hell. He’s locked the liars (minus Ali, who has been convicted of Mona’s murder and is still in the clink) in his very own personal dollhouse, complete with a blaring alarm system and their very own mannequin-attended prom. Yes, it is as weird as it sounds. Will the liars band together to escape Charles’ clutches? Man, I hope so.

Then, a few weeks ago showrunner King tweeted some episode titles out for us to salivate over:

What kind of games are we playing, Marlene? My heart can’t take this. Two episode titles aren’t enough to speculate on a whole season of capital-D drama, but guess what? Last week, Tumblr user prettylittlethe0ry posted the complete list of Pretty Little Liars Season 6 episode titles: Now we are totally in business. Based on these titles, I’ve made some predictions about what we can expect from the summer portion of Pretty Little Liars’ sixth season:

The liars figured out Charles’ system in “Welcome To The Doll House,” so I’m willing to bet that it’s here that they form a plan to get the hell out of dodge and escape from Charles’ clutches. No prom dresses allowed, except for Spencer’s McQueen knockoff.

The liars get out of the “doll house” and go to the police. They are all innocent of the charges brought against them (much to the chagrin of Detective Tanner), and the liars and Mona must tell everyone what happened to them.

This is going to be a continuation of “Songs of Innocence,” with the liars, Mona, and Ali setting the record straight.

I don’t think this one is about the liars so much as Ali. Will Ali finally get sprung from jail? I hope so. She needs a deep conditioning hair treatment like whoa.

A Bethany Young episode. Wanna know how I know? Troian Bellisario ‘grammed a pic today of her blonde real-life BFF, saying that it was a dream to work with her friends after all these years. Even though the nametag says “Sabrina,” I’m pointing back to Bethany on this one.

Um, who is the only blind person in Rosewood? Jenna! Jenna will be back! And trust me, I would never underestimate her. This is nice because Tammin Sursok wasn’t really around last season, and I miss her presence on the show.

I think this episode is all about Charles. He is clearly obsessed with his sister, Ali, and though we don’t know why I’m thinking that we’re gonna learn it all here. He just loves her so much… so much that he goes nuts and stalks all of Rosewood.

Even though we may understand Charles’ plight/reasoning for, you know, locking his sister in jail and her friends away in a weird prison, I really hope that this isn’t like a “the-beast-is-actually-beautiful” thing here. There’s no room for Frankenstein’s monster-with-a-heart in Rosewood. The people are the monsters, and for all that A has done, there is no way Charles can come back to that.

Who is going back to Radley? I don’t think it’s Charles. That’s too easy. I think it’s Bethany Young. Somehow, she is not dead. That could happen in Pretty Little Liars: You know it could. I wonder if Eddie Lamb will be back. Maybe we'll finally find out what happened to Toby's mom, too.

Marlene King has said that there will be a completion of this Charles storyline in Season 6, so hopefully this episode is the end of Charles. I need to sleep at night, Marlene. Can you just do this for me? Please?

OK, so I don't really know what will happen on Season 6 of Pretty Little Liars. All I know is I already have an ulcer.

More like this
The 'PLL: Original Sin' Creators Say A’s Identity Will Be “Very Clear” By The Season Finale
By Alyssa Lapid
Every Horror Movie Reference In The 'PLL: Original Sin' Premiere
By Alyssa Lapid
Everything To Know About 'Evil' Season 4
By Meguire Hennes
Everything To Know About 'P-Valley' Season 3
By Meguire Hennes
Get Even More From Bustle — Sign Up For The Newsletter