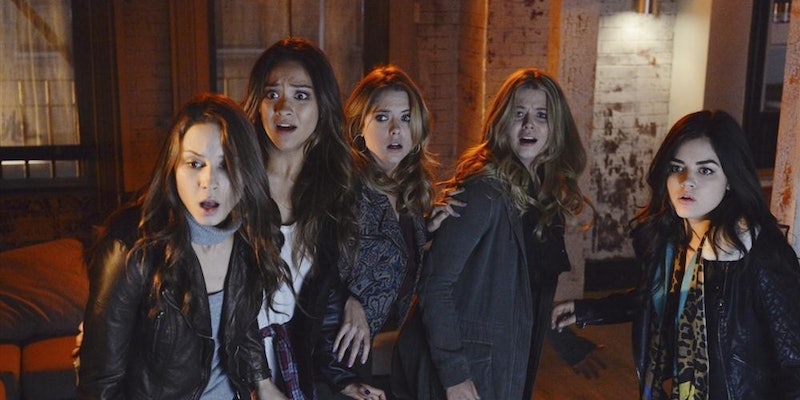 You're probably still reeling from the Big A reveal on Pretty Little Liars ' Season 5 finale, but it's time to take a breather and look ahead to the summer premiere. After we found out that Charles DiLaurentis is Big A, it's no surprise that the next item on the Liars' agenda is taking him down. They may be trapped, but the Season 6 premiere title is "Game On, Charles," which hints they'll play his games for now, probably to gain intel about the masked, hoodie-wearing freak. Mona found out the hard way that not pretending to be Ali had consequences — namely no food or water and being deafened by insane sirens — but that didn't stop the Liars from banding together to try to escape the dollhouse. Now that they've rebelled against Charles, I doubt they'll stop trying to escape his clutches and unmask his true identity anytime soon, but they have to play along at first to stay alive. Update: We now know that Pretty Little Liars Season 6 will premiere June 2.

With A giving Mona a gas mask, one of the scariest games is likely still yet to come — hopefully all of the Liars make it out of there alive. As far as we know, the first 10 episodes of Season 6 will take place in or around A's lair, and then after that the show will time jump to after college where a new mystery may take place. Our bet is that one of the Liars will go missing and A's terror will start back up again, even if they defeat Charles, but we have a long time — and two more full seasons — to see what happens. Creator Marlene King also revealed that an episode she's currently writing is "Game Over, Charles," perhaps the moment when the Liars escape or figure out how to get rid of him. But first, we have to get through Pretty Little Liars ' Season 6 premiere in June 2015.