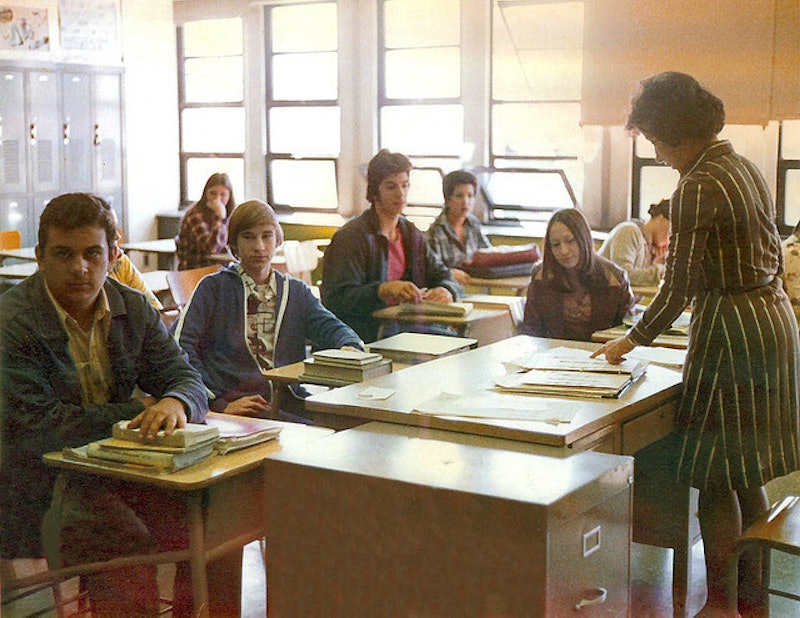 As we've covered before, sex education is failing kids. It doesn’t even cover the basics, and if they’re sending kids home with paper babies, they’re definitely setting kids up to fail and, yes, be knocked-up by the time they’re 16. But apparently, sex ed failing kids is nothing new and if we look at the history of sex education lessons, that failure is very clear.

Just last week a woman in Michigan tweeted her outrage over the sex education that her son was receiving. As Alice Dreger shared on Twitter, the class was given “paper babies,” because the whole class was pregnant due to condom failures. According to Dreger, the lesson that her son and others in his class were being taught is that “sex is part of a terrible lifestyle. Drugs, unemployment, failure to finish school ― sex is part of a disaster.” There’s only one appropriate response to all this: Oy vey.

In 1950s and 1960s: sex education was taught under the guise of botany. Students were show how plants reproduced, as if hoping that they would just be able to read between the lines and figure it all out. Because that’s not scary enough, in 1951 a sex ed video in the UK explained pregnancy to girls through the use of farm animals.

“Let's go to the farm yard. An adult hen lays eggs, so do all mother birds and fishes and reptiles... but animals such as the cow - and the human - don't lay their eggs. Instead they develop into babies inside their bodies where they are warm and well protected.”

Yet, no mention of sperm or the process of fertilization is mentioned, because, you know, immaculate conception just happens everyday. At the same time in the U.S. the term “sexual intercourse” was being used to teach boys and girls, separately of course, about sex, but the details as to the how and what were left out.

By the 1960s: sex education had evolved, but not by much. At least in those classes, female menstruation was acknowledged, but the theme was to wait until marriage before you try any funny business, not that anyone would know what funny business was based on two-dimensional diagram they were shown in books. Women were also taught to obey their husband should they suggest “any of the more unusual practices,” and if they didn’t want to engage in such things, they were to “register any reluctance by maintaining silence.” Afterward, they were instructed to apply their “night-time face and hair care products.” Great.

When the 1970s rolled around, along with social change, free love, and the Pill, sex education finally started to cover more avenues. Not only was the reproductive system, in its entirety taught, but so was contraception.

With the 1980s came the AIDs epidemic and for the first time ever, condom use not only became paramount in safe sex practices, but how to actual put a condom on was taught in sex education classes. How? Well, with bananas and cucumbers, of course. I can only imagine the laughter that evoked; bananas, to be honest, aren’t exactly conducive to condoms.

In 1993, The Education Act mandated that all schools must provide some form of sex education and information on STIs. However, it also allowed parents to opt out of such education for their kids. Giving parents, especially religious parents, that right ended up just setting sex education back several decades for some kids.

While we have evolved since the days in which farm animals and plants were used as a way to teach kids about sex, we’re still failing them. Private schools don’t have to abide by laws that prescribe that sex ed be taught and if Alice Dreger in Michigan is up in arms about the bullshit sex education her son is getting, then how many more parents out there feel the same? How many other kids are getting backward information that does more damage than good?

According to a 2014 report by the CDC, 80 percent of teens don’t get proper sex education before they have sex. This is a serious problem. Kids cannot be left to figure out sex on their own with the Internet or through friends, if we want them to be safe and sexually responsible. Adults can preach abstinence all they want, but the reality is that’s not doing anyone any favors. We’re sexual beings; abstinence-only sex ed goes against our natural instincts.