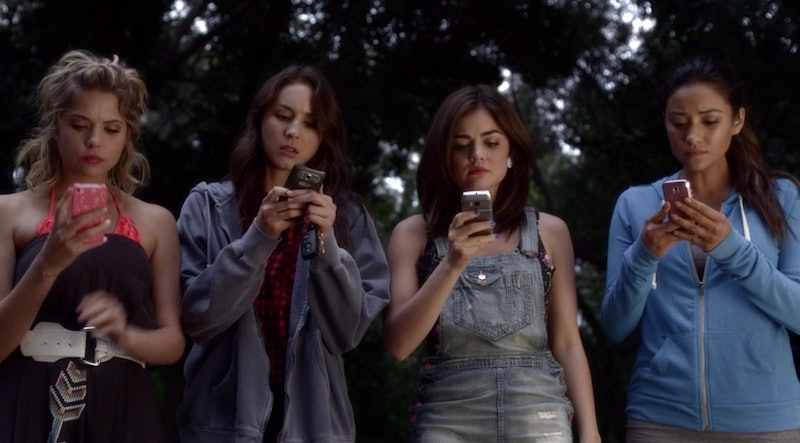 Just remember, Pretty Little Liars fans, we're all in this together. Following the Season 5 finale, "Welcome To The Dollhouse" we were promised answers, and we got some answers. Charles is A, except for one problem: WHO IS CHARLES. Actually that's the only thing. We've got our Big A reveal, and it turns out to be a character we've never heard of. Confused? I'm confused. Now seems like a perfect time to go back to the PLL drawing board and try to figure out what the heck is happening. Let's start with clues from Season 3 episode, "It Happened 'That Night," sound good?

Executive producer, showrunner, and PLL scribe, I. Marlene King told E! that "It Happened 'That Night'" is an important episode in the A mystery. Supposedly, PLL has been dropping clues about this whole Charles is A thing all along, and we just missed all of them — and of course we missed all of them, because we weren't looking for someone named Charles.

With roughly 42 days until PLL returns for Season 6, and we've got some time to kill before then, why not look back at "It Happened 'That Night'"? It's an episode I honestly haven't watched since it aired almost three years ago to the day of the Season 6 premiere: June 5, 2012. Want to take a stroll down memory lane with me, as we try to search for whatever clues might be in this episode?

But first, here's a quick refresher of where we pick up at the start of Season 3: Mona has been revealed as A, but someone's still messing with our Liars. They think A's finally behind them, but after Emily goes MIA and Ali's grave is dug up, they realize someone else is messing with them. Who?

Ali appears in a hallucination to Mona, wearing a red coat, red lipstick, and reading Lolita. Ignoring all the sexually explicit parts of the book (which there are a lot of) it's about a girl on the run. Just like Ali.

What Did Maya Find In Ali's Bedroom?

I'm in the camp that believes Maya might still be alive. She was such a pivotal character through Season 1 and Season 2, it still feels weird that she disappeared so quickly, with barely any mention afterwards. And yes, we know the end of the Maya story, with her supposedly being killed by Nate, but wait, what did she actually find in Ali's room?

Ali loved to hide things in her room (guess we could evens ay that Ali still loves to hide things in her room, since she's not dead). She not only left clues, but in some cases she hid money, too. Maya could have easily found something in Ali's room, and shrugged it off as nothing — or she could have kept those Ali secrets to herself. Might she have died with vital Ali information? Could she still be alive somewhere with vital Ali information? Four seasons later, regardless of how big or small her information might be, it could change the whole A game.

There's also the fact that Maya got a shotout during the Season 5 finale. She hasn't been mentioned in almost two seasons. Then, she's discussed — though quickly — in the Dollhouse. Maybe that's a tiny clue for us that Maya might still be important.

Help Me With This Anagram

PLL loves its anagrams. Maybe a little too much sometimes. Now, I'm on the lookout for anagrams that I might have overlooked during all of these seasons. I'm particularly interested in the fact that this hotel sign shows up twice, both times with letters illuminated. The shot is too much of a standout to be just a cool angle.

What could it be trying to tell us? It's really the "Lost Woods" resort, but I think it's interesting that TWO are the only letters illuminated at the top. Two, what? Two A's maybe? Two twins, perhaps?

Spencer's much better at anagrams than I am. I just keep seeing "two re RT" again and again and I don't think A is really into Twitter. But we can also get the word "wrote" and "tower" out of it. "Retort" and "torrent" use up a few more letters, but I can't place their meaning in any future PLL episode.

Also, the fact that there's "no vacancy." Could that be a clue in itself? What is there "no space" for? And then completely random but totally bugging me, how can there be no vacancy and have the resort be for sale?

Who Blackmailed The Black Swan?

Ah yes, the Black Swan. One of those PLL mysteries that seemed so important, and then it was just like, "Yeah, it's Melissa." Seasons later we know it's Melissa, and that she was blackmailed into it, but who blackmailed her? Where did these pictures come from? Is A really good at art and design?

There's also something else big here. The "prom" that A throws for the Liars in the Dollhouse is "A Night at the Opera" themed, and everyone in attendance wears a mask. Spencer also notes that it's the same theme that happened seven years ago when Melissa attended the prom with Ian.

Is there a possibility that A was also at that prom, too? Going off of the (still unconfirmed) theory that this "Charles" is somehow related to Jason (and possibly his twin, maybe, big question mark?) there's a chance that Night at the Opera prom would have been his prom, too. Something bad might have happened that night. Something so bad, he's been hung up on the idea of it for seven years (that's how long ago Spencer mentions the Opera prom was).

We know Melissa's the Black Swan. But I don't think the chapter has been closed on the ties between the Swan, the masquerade, and the prom just yet.

Let's Talk About This Terrifying A Lair

Seriously, what? Spencer digitally recreates A's lair on her computer, complete with a ton of creepy pictures of Ali — and note the dollhouse in the corner. Note all the dolls inside. The end of Season 5 finally brought them to this real dollhouse that A's been planning all along. We shoulda known that's where this was all going.

And, Conveniently, Wren Shows Up

I think this is the big clue, you guys. What is up with Wren? What is he doing? Why does he appear and then disappear so many times? Why does he always seem to be at the right place at the right time? What does he want? So many questions for him, so few appearances over the past five seasons, but this appearance is a big one.

He comes across Hanna as she's leaving Radley after visiting Mona. They have a quick conversation about what Mona's going through right now, and that's when Wren drops this big kicker (that I have included the subtitles for, because I watch all PLL with subtitles)."Sense is something rarely mined from mental illness. Trust me, I've spent a lifetime trying," he says. Has Wren been trying to figure out mental illness because he's a doctor and that's his job, or has he been trying to figure it out because he suffers from it himself? Later on in the episode, Toby asks "what kind of a sick person would do something like that?" referring to digging up Ali's grave. Someone who's not all right in the head, that's who. Someone like Wren? Images: ABC Family (screengrabs/9)