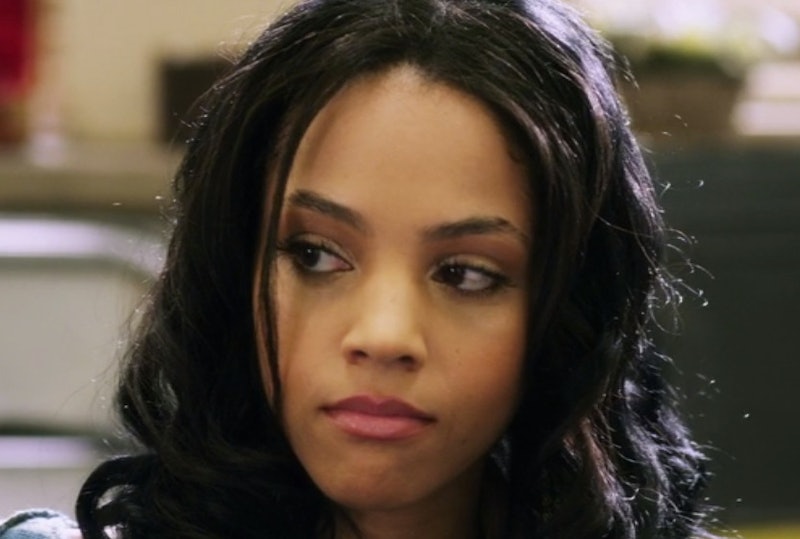 This is it, guys. Tuesday is the night we finally find out who Big A is on Pretty Little Liars . Theories have been swirling for weeks now about who the culprit could possibly be, and pretty much everyone's been a target at one point or another. But one theory fans should really be taking seriously is that PLL will reveal Maya as Big A.

It's actually not a difficult conclusion to reach. I think we can safely (as safely as you can do anything when PLL is involved) boil Big A down to three major contenders: Andrew Campbell, the master scout pathfinder and Aria's they-never-really-established-this-but-just-go-with-it-I-guess boyfriend; Ezra Fitz, the obvious choice; and Maya St. Germain, Emily's supposedly-dead-OR-IS-SHE?? ex-girlfriend. Of those three, I really think it's going to be Maya. Her whole True North disappearing act seems rather dubious to me, and now there's the possibility that Maya was the bunkmate Ali brought up moments before she received her "guilty" verdict. And, of course, there are the theories that Ali and Maya are somehow related, though I don't know if I necessarily buy those.

No matter what, the Big A Reveal is going to change everything. But if it does turn out to be Maya, then there really will never be any going back. Here's how PLL would change forever if Maya has been A all along.

We'll Never Believe That Anyone Is Really Dead

If Maya's still alive after we've believed her to be dead for almost three seasons, who's to say that Mona's not still alive, too? I mean, sure, we saw her body in the trunk of that car, and there have been several interviews in which Janel Parrish has confirmed that Mona's really dead. But riddle me this: Where did Mona's body go? I, for one, don't think it was actually in that barrel. Maybe her plan to fake her own death worked exactly as she planned it.

Either way, if it turns out that Maya is A, we're going to need to seriously back track and get some info on all the PLL deaths we've seen over the past five seasons.

All Of The Liars' Relationships Will Come Into Question

This would kinda be a "fool me once, shame on you, fool me twice, shame on me" situation. I mean, think about: Maya was (is?) Emily's ex-girlfriend. If she turns out to be Big A, it'll be the third time that one of the girls' significant others has, or is believed to have, some sort of A connection. It happened with Ezra, back in the days before we found out he was actually writing a book about Alison, and with Toby, when he thought joining Mona was the only way to protect Spencer. The only girl who hasn't experienced this is Hanna (and I swear to God, if Caleb even pretends to be Big A, I will lose my mind). Like I said, fool me once...

We'd Need To Know Whose Body The Police Actually Found

That's right — if Maya is alive and roaming around Rosewood as Big A, then the police found another body in the DiLaurentis' backyard that night, and we need to figure out just who that was. Maybe it's Sara Harvey's body? Either way, all we know about that body is that the police thought it was Maya's. There was never any confirmation or any further details released about what they found. Just some food for thought.

Maya was allegedly sent to True North, a sort of rehab camp, when her parents caught her smoking weed. We know next to nothing about this place except for the fact that Maya supposedly spent time there, so maybe there's more to it. Could it be where she's hiding Mona's body? Is it where A's lair is located? There were so many questions left unanswered about True North that it could very well reach the same level of mystery and prestige as Radley Sanitarium.

While he was threatening Emily, Lyndon pulled a classic Bond villain move and went on a crazy rant, confessing to being obsessed with Maya and even threatening to kill Paige. But if Maya is not dead, why would he let Emily think he killed her? Was he just delusional? It's possible, but something tells me that Big A is too smart to recruit someone totally out of touch with reality. Methinks, if Maya is the mastermind behind all of this, Lyndon isn't really dead (even though Emily is certain she killed him), and that he'll play a role in the next two seasons. OR, could his pseudonym, Nate St. Germain, be his real name? It's possible that Nate and Maya are the twins that the PLL writers keep hinting at (though that would admittedly be a stretch).

Maya's Website Could Prove More Important Than We Thought

Around the same time that Mona was in Radley, the Liars discovered that Maya had a website. On it, she had posted videos and photos about her life, right up until the day she died. It's possible that, in hindsight, the website could provide more information than they thought. After all, it is how they found out that Maya and Noel Kahn were connected (a connection that has gone relatively unexplained). If Maya is Big A, that website could hold the answers to every question posed in PLL history.

More like this
Every Horror Movie Reference In The 'PLL: Original Sin' Premiere
By Alyssa Lapid
The 'PLL: Original Sin' Creators Say A’s Identity Will Be “Very Clear” By The Season Finale
By Alyssa Lapid
Emma Mackey *Is* Emily Brontë In The First Trailer Of The Biopic
By L'Oréal Blackett and Sam Ramsden
Everything To Know About 'Evil' Season 4
By Meguire Hennes
Get Even More From Bustle — Sign Up For The Newsletter